What to expect: The Atlantic 10 Tournament

After 104 Atlantic 10 games, thirteen teams are finally ready to descend upon Brooklyn and battle to be crowned Atlantic 10 Tournament Champion. The Coming Out Party

The 2013 Atlantic 10 Tournament in the brand new Barclay’s Center put the new-look A-10 on the national stage. With twelve teams that had earned some national attention in their own corners of the East Coast finally under one roof, the once solidly mid-major conference began an important four-day rebranding.

The event culminated with a 62-56 rock fight between top-seeded Saint Louis and 2nd-seeded VCU, and a Selection Sunday that sent five teams to the 2013 NCAA Tournament. The next weekend, VCU, Saint Louis, Butler, Temple, and La Salle all won their 2nd-round games and La Salle punched through to the Sweet 16 behind the Southwest Philly Floater.

Entering this season, Temple and Charlotte already had plans to leave the conference, and they were joined later by Xavier and Butler. What looked like a derailing blow at the time is now an interesting afterthought lost in the forward progress of a conference on the brink of sending six teams to the NCAA Tournament.

The 2013-14 season had its fair share of twists and turns. George Mason stumbled their way through their inaugural campaign in the league, George Washington’s sophomore defensive core was transformed by the addition of Indiana-transfer Maurice Creek, and La Salle sputtered on offense without Ramon Galloway. More importantly, the league took care of business in the non-conference and established itself as a force nationally.

The Atlantic 10 has been dominated by defense this season. VCU (3rd nationally) and Saint Louis (5th nationally) boast two of the most efficient defenses in the nation and this chart shows how much greater the variance is in defense than offense around the league. The league average 103.1 points per 100 possessions ranks 26th of 33 nationally. 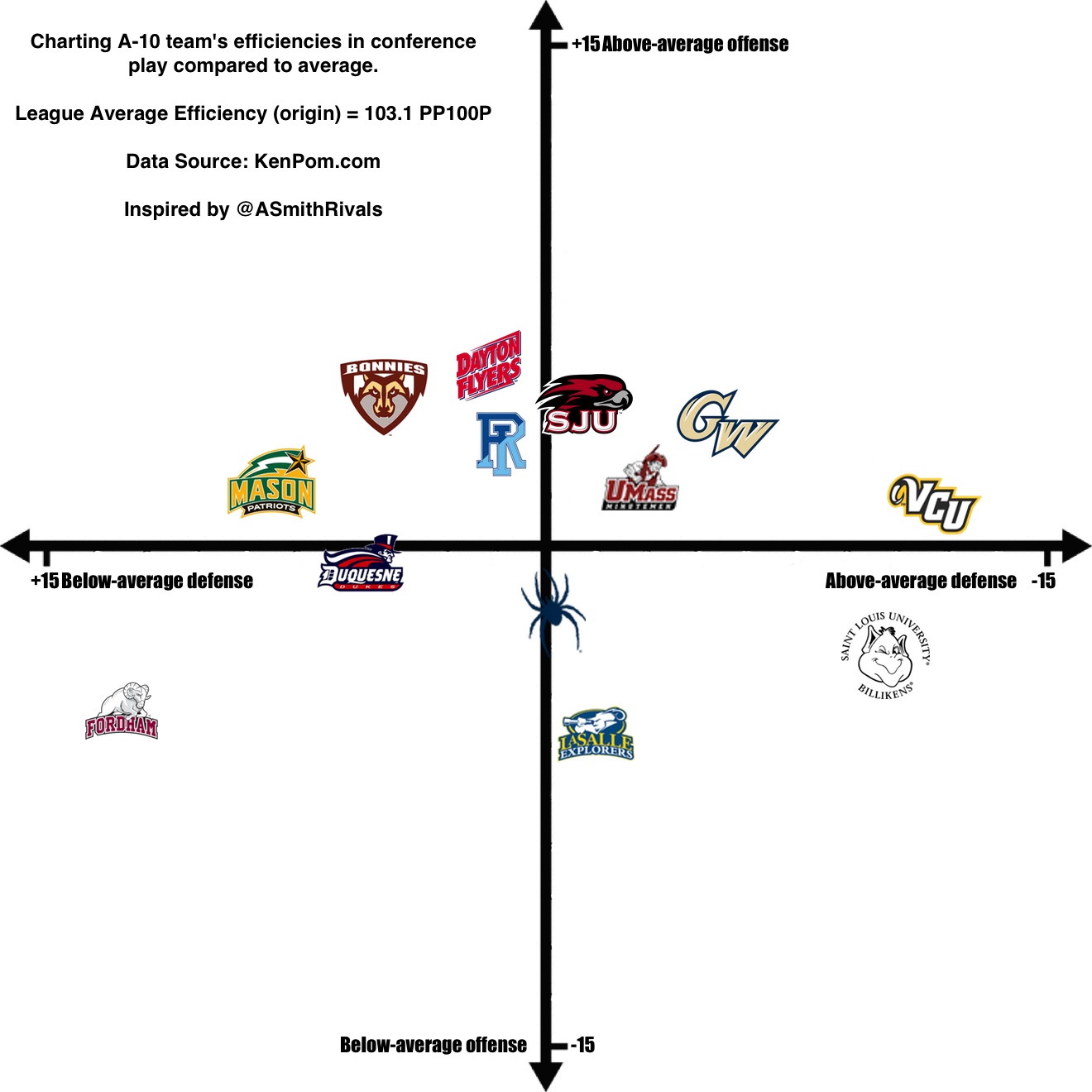 The 5 Best Things That Can Happen

Seven starting seniors. Six 1,000 point scorers. When the Billikens play the Rams, basketball wins. A rematch of the 2013 A-10 Tournament finals is the best case scenario for objective fans in Brooklyn, and it would be highly entertaining.

Mooney is a talented and respected coach but his first trip to Brooklyn didn’t have a storybook ending. He picked up a double-technical in the final minutes of a brutally close loss to Charlotte. Hopefully his second trip up I-95 is more rewarding–or at least more representative of his true character.

3. A memorable performance by Maurice Creek

Creek has had a tougher college career than most. Three major injuries in 22 months have denied Creek a real opportunity to play in the postseason. This weekend, hopefully Creek can do what he does best: put the ball in the basket.

4. As many second rematches as possible

A thirteen team, sixteen game schedule has robbed teams of multiple rematches in the same season. The most exciting route for a team like VCU would be Richmond → George Washington → Saint Louis: all teams the Rams have already played twice. The Rams aren’t the only ones, the bracket has plenty of exciting potential second rematches loaded with intra-season history.

Upsets are awesome, but the Atlantic 10 is about to make a statement that could help calm the tides of realignment and further establish the A-10 as one the premier basketball conferences in the country. Six A-10 teams getting their names called on Selection Sunday is what’s best for the league.

There are six teams that could believably cut down the nets Sunday afternoon. Saint Louis, VCU, George Washington, Saint Joseph’s, Dayton, and Massachusetts are all probably going dancing, and they can all strike fear in higher seeded teams–but they are all flawed.

Ultimately I think VCU will triumph. The Rams’ full-court pressure and deep rotations make them a tough opponent when playing three or four games in three or four days, and their unique style is tough to prepare for even on off weeks. While they are the favorites, they probably still have a less than 50% chance because the field is that wide open. The Rams will need every point they can get, and their ceiling will be dictated by their ability to make shots in one of the tougher defensive leagues in the nation.

12/15ths of the all-conference teams announced on Tuesday were seniors and the Atlantic 10 boasts some of the best back-courts in the nation. Sit down, buckle up, tune in and prepare for one of the most exciting weekends in sports. Today there are 13 teams, but only one can be crowned champion on Sunday afternoon.

Jett/Evans can shut down perimeters with defense. #SLU’s offense is pedestrian. Need all 5 senior starters to step up.

HAVOC! was designed for March where Smart is 26-7. Rams are favorites behind their 3rd best defense nationally but they need to make shots.

Maurice Creek is catching fire at the perfect time. Can Kethan Savage be a + after missing 11 games? The 2x-bye before UMass should help #GW

Can the Hawks win 3 games in 72 hours with a 5.5 man rotation? Galloway is elite on offense but the Hawks are on a 2 game skid. #SJUHAWKS

The #Flyers have won 9 of 10 and are rolling behind the best offense in the league. Can they become the 2nd #5 to ever win?

Best 6th seed ever in the A10? Losing the 2x-bye could be fatal but Chaz Williams is the ultimate put the team on his back player. #UMass

Post-Lindsay emotional run is over and the A10 Tourney isn't in the Robins Center. Can Mooney get redemption after his meltdown in '13? #UR

L on senior day to #12 GMU. Respond with W at then #2 SJU. Garland/Duren are as good as any but can the Explorers make shots? #LaSalle

#SBU way underperformed in A-10 play. Wright is an under appreciated elite scorer. Split series with La Salle but will probably lose rubber.

Last 3 games:W at SLU. L by 4 to UMASS. W at GMU. Ovie Soko is skilled and leads the nation in FD/40. Big chance of upsetting UR. #duquesne

#URI is rallying after a tough 6 game skid. Lost at UMass by 3 on 2/26 setting up an intriguing rematch. FR E.C. Matthews is the real deal.

Frazier and Severe will post gaudy numbers and pull some hometown fans during a short stay at BC. At least the Bronx isn't far. #Fordham