Saturday is a clash of generations and a battle between two very different, but admirable, college basketball programs. Virginia Commonwealth University visits #12 Saint Louis on Saturday in a game between two teams that approach basketball very differently on the court, but two programs that are models for a better college basketball.

I cheer for Saint Louis.

There, I said it. Saturday is the first time all season that I won’t be pulling for the Billikens. In an era partially defined by one-and-done players and athletics departments firing coaches practically before they unpack their bags, Saint Louis is everything right in college basketball with a nod to the ways of old.

The Billikens are ranked 12th in the nation, they’ve won sixteen straight games, and their two losses are to undefeated Wichita State and Wisconsin, a team that started the season 16-0. More importantly, they aren’t a team of McDonald’s all-Americans in the NBA Developmental League Collegiate Division. No, they’re a team built in the shadow of the the legendary and recently deceased Rick Majerus that starts five seniors, plays soul-crushing defense, and has almost unmatched balance–all led by a coach who got a second chance after a not-so-perfect ending at Army.

Rivalry is enhanced by respect and history. The two teams have only played each other four times, but every game has mattered. VCU won the first two in 2010 during the College Basketball Invitational finals, a unique best-of-three event. The Rams’ experience was an important prelude to their 2011 Final Four run.

The Rams faced the Billikens twice last season. SLU ran VCU out of the gym in the first meeting 76-62–an event that Briante Weber remembered on Wednesday by saying, “we went into Saint Louis last year, and I don’t know what we were doing.” SLU won a much closer meeting in the finals of the A-10 Tournament later last year.

35ish games a year, Saint Louis is worth cheering for because they set an example for a better college basketball. Saturday things will be different. If VCU wants to have a chance at winning a conference title, something Coach Smart has never done, they need to win on Saturday. A win means a one loss deficit behind SLU. A loss means a three loss deficit.

So don your black & gold and scream and yell at the the television. Despise the Billikens, love the Rams, and truly believe the refs are on a mission to derail HAVOC!–but for one second, take a breath, sit back and watch generations collide as a team designed by the legendary Rick Majerus plays a team coached by Shaka Smart in a game called by the legendary Bobby Knight.

Saint Louis on average is pedestrian on offense, but they have good balance and Jordair Jett, Dwayne Evans, and Rob Loe create some serious mismatch issues. They boast five players averaging 8.8+ PPG. They rank 108th in offensive turnover percentage, and their guard play is mature enough to frustrate HAVOC!.

Defense is how the Billikens win games. When your coaching grandfathers are Robert Montgomery Knight and Rick Majerus, anything less than stout man-to-man defense would be considered a crime. SLU ranks 3rd in adjusted defensive efficiency thanks to solid defense inside and outside the arc, the ability to force turnovers, and physical rebounding.

Dwayne Evans and Jordair Jett are two of the best individual defenders in the nation and Rob Loe has a special ability to defend the paint. Guys like Treveon Graham and Briante Weber could really struggle attacking the paint because the Billikens’ help-defense is near perfection at times. 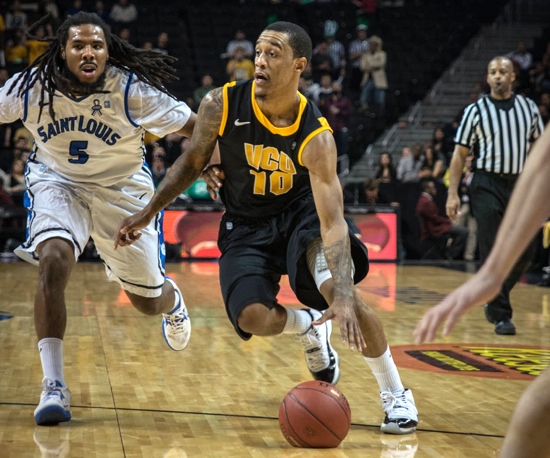 At 6-foot-1, 215 pounds, Jett is a tough matchup at point guard. His combination of speed and strength is really unique to the position. It will be interesting to see how VCU addresses the problem in the half court. Briante Weber and Rob Brandenberg have the potential to be outmuscled by Jett who has more in common with a fullback than a point guard.

Jett doesn’t have much of a jump shot but he has an incredible knack for getting in the lane where he can score or dish. He ranks 25th nationally in assist percentage, and stopping him needs to be priority number one on Saturday.

#11 Mike McCall (SG, Senior) • McCall is Saint Louis’ x-factor against the press. What Jett lacks in explosive athleticism, McCall makes up for, and he is one of the better secondary ball-handlers in the conference.

#30 Jake Barnett (G, Senior) • Barnett’s stats aren’t impressive, but he’s the perfect example of why Saint Louis is so dangerous: their identity as a group is bigger than any individual piece. SLU is a perfect 16-0 since he replaced Reggie Agbeko in the starting lineup.

#21 Dwayne Evans (G/F, Senior) • The Dwayne Evans-Treveon Graham matchup will be a clash of the titans. Evans is a 6-foot-6, 230 pound defensive menace who also leads SLU in scoring at 14.5 PPG because of his Graham-like combination of strength and speed. Evans faced guarded Troy Daniels in both games last season and basically eliminated VCU’s greatest 3-point shooter ever.

#51 Rob Loe (C, Senior) • Loe is great at defending the paint, and he has the skills to guard Juvonte Reddic. He’s very capable of stepping out and hitting 3-pointers which can transform SLU’s offense.

Saint Louis is definitely vulnerable. On 2/1 it took overtime for them to beat George Mason, and it took an incredible play for them to beat La Salle by two points on Saturday. Still, this is not a good matchup for VCU. If the Rams can’t score, then they can’t set up the press which usually means trouble.

For VCU to steal a win, it will require great play from everyone against an incredible team in a difficult environment. KenPom picks SLU to win 69-64 with a 71% chance of victory.