With 4:30 remaining in the second half, Mo Alie-Cox drained a pair of free-throws to put VCU ahead by 24 points. Coach Smart was already tinkering with lineups that he’d never use in close games: Melvin Johnson in the “4 spot”, Jairus Lyles as the only point guard. On November 21st, Coach Smart was experimenting in a game for a different reason: his #10 VCU Rams were getting run off the court by Florida State.

I think we got humbled when we took our trip to Puerto Rico. I think coming back from that, we’ve gotten better in practice, we’ve made progress, we’ve made defensive progress. Offensively I think we’re still a work in progress. I think we’re learning that our best offensive players need to be the ones who get to shoot the ball the most.Coach Smart

In what has sort of become an annual tradition, VCU left their exempt tournament in November 1-2 with more questions than answers. Now VCU is 17-4, a career best start for Coach Smart and VCU’s best start since Anthony Grant led the team to 21-4 in 2007–the year Eric Maynor hit “the dagger” against Duke in the NCAA Tournament.

After impressive wins on the road against Dayton and La Salle last week, the 2013-14 Rams are shaping into form at just the right time. They’ve won nine of their last ten games; Briante Weber, who is now three steals away from breaking VCU’s career steals record with his relentless defense, is starting to get noticed for his poise as a floor general; and the Rams’ two preseason all-conference players, Juvonte Reddic and Treveon Graham, have reestablished themselves after a somewhat rocky start to the season.

Winning is the norm rather than the exception at VCU, but this team is different. The 2013-14 Rams aren’t a one trick…Ram. In 2011 VCU went to the Final Four behind record setting 3-point shooting. In 2012 they found success because of an insane number of steals and forced turnovers but they couldn’t score. In 2013, the Rams scored with greater ease because of the emergence of Treveon Graham but they still struggled when HAVOC! wasn’t HAVOC!ing.

This season, the pieces are still coming together, but the known parts are turning into a much more multi-dimensional HAVOC! machine than in the past.

“They’re one of the premier teams in the conference, and one of the reasons is they can win a lot of ways.”Coach Pecora

Six Rams scored nine or more points, Juvonte Reddic finished with 10 points and 10 rebounds en route to his 24th career double-double, and the Rams held leading scorers Jon Severe (20.2 PPG) and Branden Frazier (17.8 PPG) to 5-of-23 shooting in a win that was even more lopsided than the final score suggests.

It wasn’t a beautiful brand of basketball, but VCU dominated despite only shooting .338 from the field and scoring only eight more points off of turnovers than Fordham. In fact, both teams made 22 field goals in the game–the Rams finished 23-of-27 at the charity stripe compared to 9-of-18 for Fordham.

Fordham’s not a good team–Head Coach Tom Pecora may even go as far as to say so himself–but the shorthanded Rams took care of business on a snowy Wednesday night sandwiched between an emotional double-overtime victory over La Salle and a rivalry game against a team that punked them once last season. How they will win each game moving forward isn’t as clean cut as past seasons, but the 17-4 VCU Rams are an entirely different team than in November.

After a taxing week on the road, the Rams could have looked more crisp at home but they got the job done without Terrance Shannon (out for the 3rd straight game with a sprained knee) and Treveon Graham who sprained his big toe on his left foot in the second half.

Treveon Graham will work hard to rehab the injury leading up to Saturday’s big crosstown show down with Richmond and Coach Smart, “guessed [his return] will be soon.” Terrance Shannon dressed for the game and went through warmups but didn’t play. He’s still not 100% but he should return soon.

VCU’s production was extremely balanced so it’s tough to give this award to any one player. Jordan Burgess tipped the scale by being the glue guy that held it all together. He dove for balls, rebounded well, and found a few of his teammates open. Plus/minus isn’t the best stat, but he led the Rams at +25. Reddic was second closest at +19 and no one else was better than +12.

He’s 6-of-11 from 3-point range in the last three games and he’s hit an early 3-pointer to kickstart the Rams in all three of those games.

Crosstown rival Richmond visits the Siegel Center on Saturday morning at 11:00 AM for the Black & Blue Classic Part 1. The game will be on ESPN2. 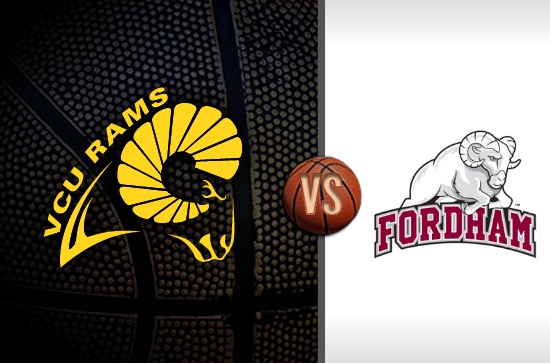