Meet me at the murals: Broth paints a new chapter Mickael Broth’s past is well known. He spent almost a year in prison for painting graffiti. An ambitious prosecution team sought and exacted a maximum penalty based primarily on him spraying his one time moniker and motto, “Refuse” (short for “Refuse to be Smart”), on a CSX bridge over I-295. The ordeal began when he and his now wife Brionna were awakened in their bedroom by an aggressive police force. The government was looking to hurl the book at graffiti artists and they got their man. They swiftly threw Broth into a dicey mix of hardened convicts whose weapons were a bit more lethal than a spray can. His capture and imprisonment were a gleaming success for the prosecution and seemed a gloomy setback for Broth. However the story of Refuse is no longer a story of retribution and community blight. It’s a story of redemption and community might. 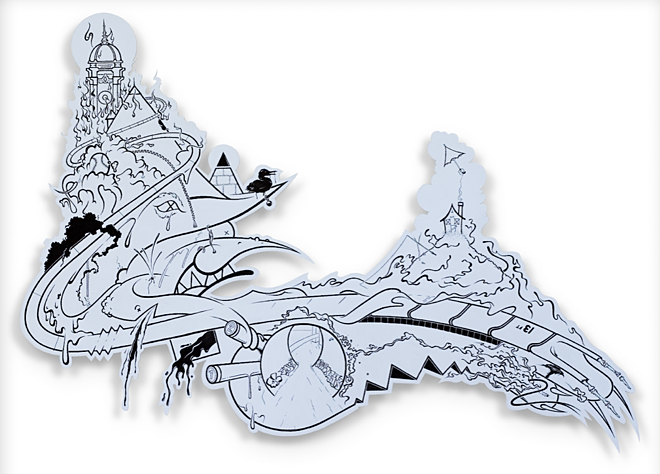 While in prison, Broth refused to let the bars halt his creative energy. He mixed watercolors out of Skittles and M&Ms and painted with q-tips. He drew on notebook paper with ballpoint pens issued in minute sizes so they not double as weapons. As the MacGyver of artists, he proved that art cannot be stopped. Broth not only let his art live, he also fine-tuned his craft. His pen on paper works became a strength, with much of his best work still coming from this style. Those trademark drawings express his personal journey with extraordinarily precise line work that flows from one dramatic image to another–like the current of his life.

After his release, Broth went on to graduate from VCU with a BA in Painting and Printmaking and since has shown his work in galleries around the country. After being awarded a prestigious VMFA Fellowship, he was invited before the Virginia General Assembly where he was honored as a valuable contributor to the Commonwealth. He returned to the embrace of his loyal loved ones and to the causes he calls his own. If you spend any time with him, you will immediately realize his warmth, humility, and energy were best freed. He and his wife own a home on Richmond’s Northside, and Brionna was just named Teacher of the Year by Elizabeth Redd Elementary. They are a couple very focused on the betterment of RVA.

Broth also promptly returned to prolific painting in the streets-only now his art is called a commission rather than a crime. His sign work shines on Richmond restaurants Mom’s Siam, Sticky Rice, and Third Street Diner, and he has regularly backed up Ed Trask on many of his well known murals. Similarly, he silently stepped in at the last minute to assist an ailing Aryz in completing his incredible elephant mural on Main Street. You can also see Broth’s exterior art on hip clothing-boutique-turn-yogurt-lemming Rumors, edgy club Empire, Brookland Park Tattoo, and a sudsy sign at Car Pool. He painted those colorful mini murals on Broad Street’s traffic control boxes as part of an arts district beautification project sponsored by Altria and Venture Richmond that also included fellow RVA Street Art Festival (RVASAF) artists Ed Trask, Ham, and El Kamino. All of this art brightens rather than blights those businesses and streets and the surrounding neighborhoods.

The current chapter in the history of graffiti art, especially in RVA, is about how many of these artists are awakening, enhancing, and energizing the community. Broth’s experience with the criminal justice system has certainly shaped him, but in our time together he rebuffs the chance to engage in the bitter old debate over graffiti, in favor of a positive conversation about art moving us forward.

“Yes, graffiti is a crime…but that doesn’t mean graffiti writers can’t create incredible works of art for the community to enjoy.”

The recent RVA Street Art Fest is a prime example. Like Broth, many of the RVASAF artists have long histories in illegal graffiti and almost all have turned their talents toward sanctioned, shining public art.

“It is funny to think that I spent ten months in jail only a few blocks from where the murals were painted. Personally, I’m excited to be a part of the energy that is bringing positive, forward momentum to the city.” 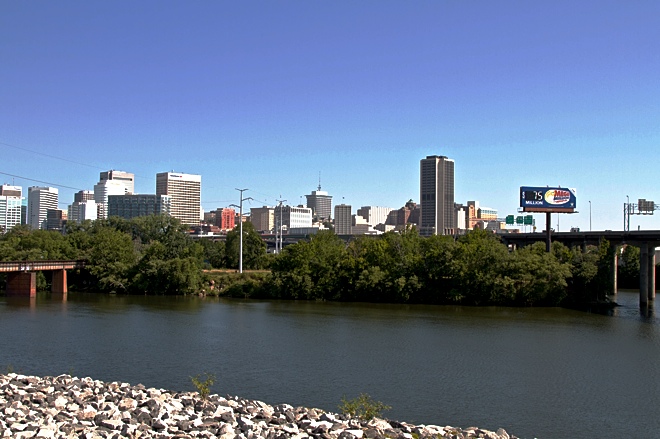 Broth has not only created at the power plant an easy to enjoy work of art but has used his wall to comment on a community cause. Painted during April’s RVASAF, his Mayo Island mural is a critique on a sorely missing piece in our riverfront lifestyle.

Mayo Island, an invaluable strip of 16 acres, sits in the middle of the James River bisected by the Mayo Bridge which connects 14th Street in the Shockoe Design District to Hull Street in Manchester. The island boasts fantastic views of the Richmond skyline and Tobacco Row to the north, Great Shiplock Park and Ancarrow’s Landing downriver, as well as the south side portion of the Richmond Slave Trail. The river’s waters on the eastern end of the island are flat and shallow, inviting swimmers, stand-up paddleboarders, boaters, and fishermen. The island’s western end connects to an archipelago of scenic river islands, including the great blue heron rookery. Maybe most notably, Mayo lies just below the peering eyes of millions of travelers who traverse the I-95 bridge–a marketer’s dream.

Because of the Mayo Bridge, the island is easily accessible. However, portions of the island are privately owned, and as a result, except for a recycling center where trash is processed and a few secretive artist studios, a whole lot of nothing goes on there. The owners have gated and fenced the eastern half of the island preventing public access and allowing unsightly underbrush and urban decay. Essentially, instead of beautiful, it’s a blight.

Broth is absolutely indignant about the bars around Richmond’s riverfront gem.

“A gorgeous piece of land should not sit unused for decades simply because the property owner is waiting to sell it to the highest bidder.”

His sentiment is not some displaced rant. The 2009 Downtown Master Plan envisioned Mayo Island as the centerpiece of the Riverfront. The 2012 draft Riverfront Plan refers to it as Central Riverfront Park, insisting that the City acquire it for public use and unleash this unique asset. The plan calls for walking and biking trails, multiple watercraft launches, open green spaces, interactive art installations, play areas, overlooks, and event space for music festivals, farmer’s markets, cycling events, and skate events. Anyone who remembers the awe inspiring shots during the 1999 X Games trials of legend Tony Hawk sky high above a vert ramp with the downtown Richmond skyline as a backdrop has to like that last part. The 2012 Plan emphasizes:

The acquisition and transformation of Mayo’s Island into public open space is a priority for protecting the integrity of the James River as an accessible landscape, reflective of Richmond’s rich natural and cultural heritage: Mayo’s Island becomes the “green jewel” of the Richmond Riverfront. 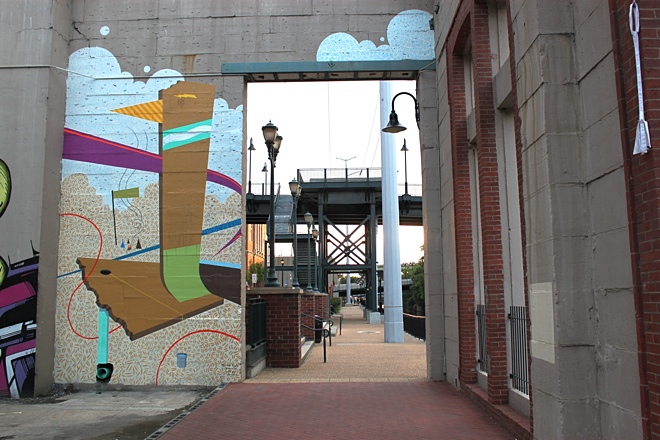 Broth tells me his RVASAF mural is a “memorial to a place that’s potential is nowhere near realized.” In the mural, abstract geometric shapes and lines define the island’s landscape and most prominent features. The composition calls to mind graphic design drawings by architects and planners of what the island could be. However the substance of Broth’s mural captures what the island is instead. He painted the tiny tent village on the Eastern end of the island where the homeless created a community kept warm by campfires. Ironically, Broth salutes CSX as a major player in the island’s history with a vintage yellow lightning bolt, a logo once found on the trains that rumble through. The infamous Virginia Lottery billboard above the I-95 bridge sits below a sweeping neon interstate. Birds fill the blue sky. As if to make a point about Mayo’s current posture, the proud, almighty James River appears as a diminutive, narrow and lifeless blue strip, dwarfed by concrete and misuse.

The most prominent feature of the painting is a towering skate ramp that rises above all else. Until the private owners recently locked down the island, there was, for a time, a lively skate scene there and the kids who used it took care of it. Broth and his friends spent many afternoons shredding in the shadow of the Richmond skyline. His time taking in those views, watching the herons, swimming in the James, and enjoying this rich perch smack in the middle of his city uniquely positioned him to speak up about a special place.

“It’s an incredibly beautiful part of the City that most people don’t know about since it’s only frequented by skateboarders and the homeless….and now that it has been locked and fenced, just a few artists who rent space in a run-down building.”

Broth is a very open and welcoming guy. At his insistence, he and I spent an entire day exploring some of his haunts. He had a six pack of cold beer in hand when I arrived–he’s nothing if not generous. So if you want to evoke his ire, show him an awesome community spot where the community is unwelcome.

He long ago broke free of his rebellious Refuse alter ego. At the power plant, he successfully redirects his street-art energy into a striking mural and his message into an important community cause. Broth thus joins Milk, Ham, and El Kamino in painting on the power plant huge monuments to a river that looms so large in our past, present, and future. Each shows how talents developed in the streets are now being used to beautify and enliven.

With clouds and blue sky, the Mayo mural travels up and around the frame of the power plant’s exit door, where you leave the street art gallery. The open door seems to serve as an invitation to your imagination. That architecture allows loads of natural light and varying views of RVA to flow into the gallery and all kinds of possibility to shoot out into the world.

Broth will be showing some of his work at Studio Two Three at 1617 West Main Street. Other artists featured include Greg Bethmann, Matt Betts, Tyler Thomas and Ross Trimmer. The exhibit opens with a reception this Friday, July 6th at 7:00pm and features a performance by Julie Karr. Mike Broth is writing a book called Gated Community about his experience with the criminal justice system and a look at youth, vandalism, property ownership, and incarceration.