Jarred Barr, an incredible 11-year-old street art enthusiast, had the opportunity to paint along some of his heroes. One of the many striking things you notice during a meeting at the murals is the number of kids visiting the power plant. Their infectious energy bounces from mural to mural; they pose for pictures, picking out their favorites. You fear that their eyes will pop out of their little heads and can almost watch their minds loop on a roller coaster of imagination and creativity. There appears to be an established game of being the first to the coolest mural for a photo opp. However, for one lucky local 11-year-old boy, the murals are far from child’s play.

Jarred Barr, of Chesterfield, Virginia, is a street art enthusiast. He keeps up with all the best artists and fills his own sketch books with drawings, often attempting to replicate the art he finds on Flickr. For a while, he has responded to the standard adult inquiry “What do you want be when you grow up?” with “I want to do what Ed Trask does.” Over last Christmas break, he spent 13 hours painting three murals in his church’s youth building. He designed and drew the newest postcard promoting the Petersburg Area Art League. Again, he’s 11.

His family has embraced his interest, and in April they loaded up the family minivan and headed to the Fan. There they watched Aryz work up his elephant mural and chatted up the artist.

The next morning Jarred’s mother Stephanie happened to read an article about Mickael Broth–detailing his art as well as his incarceration. Later that day the minivan again set off to the city and toward the Aryz mural. Instead of Aryz on a ladder, they found Mickael Broth. The always humble Broth, when asked whether he was part of G40, shouted down, “No I’m just a local guy helping out.” Stephanie refused to accept this answer and soon learned the stand-in was the very artist she had read about earlier. That day Broth left some expert brush strokes on an incredible mural and a major impression on a star gazing young man. Jarred’s mother told me about the time Mickael spent with Jarred, talking about art and his life lessons.

“Mickael was so very kind to Jarred and generous with his time, he left a huge impression on Jarred because of his honesty and his experiences.”

Well of course the Barr van would venture to RVA Street Art Fest. First, to the artist talk at the VMFA where Broth again took time to catch up with his young fan. The painting could not start soon enough for Jarred; his family was at the power plant on the first day. They met many of Jarred’s heroes as each took a break to shake the hand of the young muralist.

“Once again, we were blown away by the kindness and generosity of all these artists.” 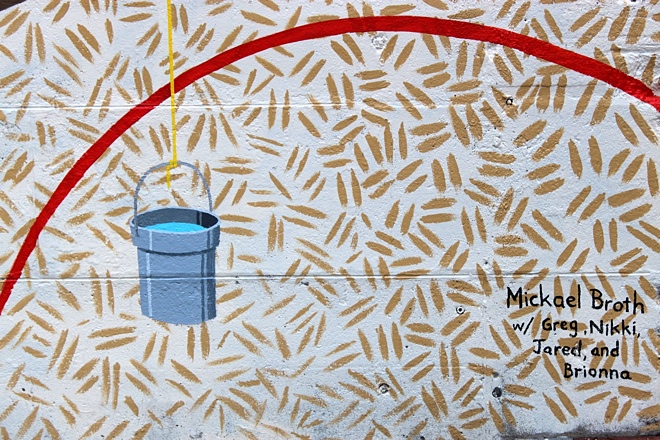 Then things went next level. Broth’s wife Brionna grabbed Jarred and said, “Mickael needs your help.” Broth handed Jarred a paintbrush and a sketch and set him free on Mayo Island. He painted much of the background, etching away for over an hour. The encounter was a good test of composure for the ecstatic artist, good practice for his chosen career, and created a memory he will not soon forget. When I asked Jarred how he enjoyed working on the mural, I realized I had posed the world’s dumbest question.

That covered, I learned Jarred really knows his street art. “My favorite part was painting with Mickael. And getting to paint alongside the other artists too, like HENSE, El Kamino, Pose, and Jeff Soto, who I have admired for a long time. The art is all so different and so amazing. And they are all really great guys.”

I asked Jarred whether he would want to paint a large scale mural when he gets older and he again one-upped me: “Definitely. I’d like to do one now actually.” I don’t recommend betting against him.

Jarred also shared with me a precocious intellect for creating. “I like being able to express myself. I like the start to finish process. And I like seeing the final product of something that started in my head.”

Amazing how a street art festival that started in Jon Baliles’s head, when paired with some incredible artists and incredible people, can spin out so many positive products for our community.