Meet me at the murals: El Kamino calls the wild

Although graffiti is an urban art, El Kamino’s love of the great outdoors is apparent in his paintings. You’ve probably seen his work that features Blue Herons and catfish on Broad Street, in Carver, or down by the Canal Walk. Wildstyle is one of the oldest graffiti types. Graffiti writer El Kamino spends a lot of time in the wild–only for him, that means communing with wildlife. Below is a photo of the artist with one of the many catfish he has pulled from the James River, in this instance from an unsuspecting school below Hollywood Cemetery in downtown Richmond. 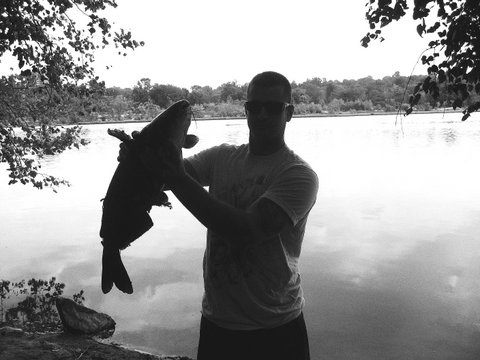 Although graffiti is an urban art, El Kamino’s love of the great outdoors is apparent in his paintings. Translating loosely to “the road” and connoting a seeker or wanderer, El Kamino’s ethos echoes the tapestry of places he has been and experiences he has had.

“My life and my work are one in the same. I paint the things I see and I pay tribute to the things that are important to me.”

His tribute to RVA is a rich one. Although he no longer lives in Richmond, you can tell this place is important to him. At the RVA Street Art Fest (RVASAF) in April, El Kamino graciously redid a “Richmond” piece because the original in the City’s historic Carver neighborhood recently fell with the demolition of the building connected to it. El Kamino jumped at the opportunity to paint another one. 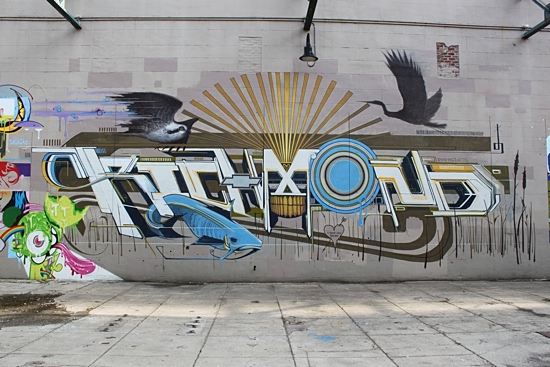 Most noticeable are the mural’s allusions to the James River behind it, including gorgeous expressions of the river’s ospreys, the great blue heron rookery, and the giant catfish the artist enjoys pulling from the river bed–with gear pulled from the bed of his Chevy. In an incredible moment after the street art festival, as the sun began to set over the James and El Kamino sat atop his lift, up walked a local gentleman named Deerslayer from his fishing hole around the corner with a 30 pound catfish in hand to, as all good fishermen do, compare fish sizes and grab a photo opp.

The wildlife in the mural is a reminder to Richmonders that a wealth of stunning scenes exist a river rock’s throw from the mural site. Walk east along the James away from the power plant’s murals and you’ll find a rough path and metal ladder to the pipeline walk, which welcomes you into the mystical home of dozens of great blue herons and other water birds, views of ferocious Class III and IV rapids contesting their courageous paddlers, and several fisherman hoping to snag a giant blue catfish like the ones El Kamino pulls from the spot. He tells us he has spent countless hours on the pipeline, long before it was so easily accessible.

“There is a certain energy that place holds and you can’t help but be affected by it.”

While the artist prefers to stow his public persona in the shadows, with brush strokes his soulful spirit shines brightly. A true outdoorsman, his work depicts wildlife as both beautiful and base, capturing nature’s innate essence on concrete walls. Converse recently commissioned him for a sky high mural on the side of its Rubber Tracks recording studio in the heart of Williamsburg, Brooklyn.

Our regal herons have especially spoken to him. You will see them in many of his “interior” paintings, in the Converse mural, in the RVASAF mural, and in the signs he painted in the spring of 2011 at First and Broad Street as part of a downtown revitalization project sponsored by Altria. 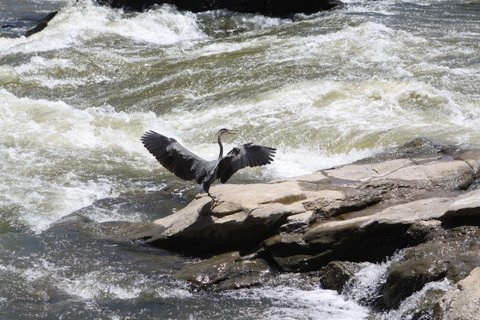 “The heron has become my symbol for all things river. From the wildlife to the scenery, to the history, these majestic birds embody every aspect of what I enjoy about the outdoors, and the James River in particular. I like to think that Richmonders of the long past looked upon them with the same sense of awe and respect as we do.”

Raised in the suburbs of Richmond, El Kamino started wall painting/graffiti as a teenager, before landing in art school at VCU. However his draw to street art, before street art was cool, pushed him back out onto his own after two years as a Ram. The raw creativity in his background combined with the fine art training shows in his stew of breathtaking detail alongside the harder edges and traditional graffiti piecing lines.

El Kamino’s RVASAF piece, of course, spells out “Richmond.” Like all great graffiti artists, his lettering style is uniquely his own. The mural’s “M” lets us see the artist processing some recently lost loved ones in a meaningful manner that would amaze local artist Noah Scalin, and the “O” seems a proper drippy, trippy homage to the outlandish neighboring artists to his left, each of which are close friends.

“Graffiti is rooted in a desire to be recognized. To get your name out there and let people know who you are…To let the world know that you exist.”

Urban kids began tagging, bombing, piecing, and scheming in force in the late 1960s and early 1970s to speak out and climb out of a place where they felt forgotten.
That effort in art progressed from the tag, which is a quick spray paint scribble of one’s name on a train, to the more colorful, detailed, often elaborate masterpieces, or “pieces” young artists used to express their identity. Train painting eventually evolved to walls. The craft was invented and mastered by very young men in a significant period for art history. El Kamino spent years as a youth painting his name in numerous cities and towns but as he grew older began to realize that “something was missing from the equation.”

By, instead, painting the name of a city or neighborhood where he is working, he effectively flips the message from “look at me!” into “look at us!” His expression is no longer look how cool El Kamino is, but look how cool Richmond, Seattle, Oklahoma are. The inclusion of adored symbols of the area speak to that purpose. 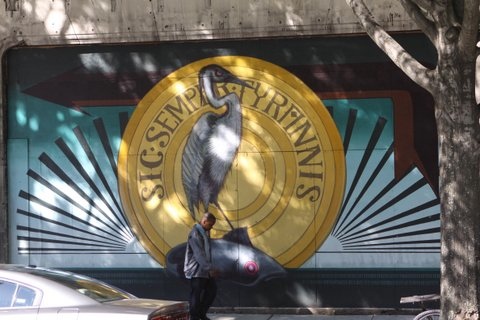 He accomplished that goal with aplomb at the power plant on the Canal Walk and also in the RVA Arts District where a year previous he painted vintage signs as part of a “Beautify Broad Street” project. These signs, too, highlight our town. One appears as an advertisement for The Mighty James River–noting that it has been “Serving Richmonders Since 1607.” Another is a representation of the Commonwealth’s flag, only with El Kamino’s heron at the center straddling a catfish, reflecting a likely scene at a number of hot spots on the James. Alongside the flag, he points us to some of those haunts with old timey signs advertising popular river spots: Buzzard’s Island, The Nickel Bridge, The Pipeline, Reedy Creek, Texas Beach, Belle Isle, Ancarrow’s Landing, and 42nd Street.

“I would hope that by using the natural world in my pieces, folks think about how great our river is. By seeing the state flag, they walk away with a sense of pride.”

As far as the signs, El Kamino tells me:

“They are all spots along the river where I have spent time. I figured folks would know most of them, and I was hoping it might make them curious to ask about the places that they don’t know about.”

El Kamino thus also alludes to the lively conversation that street art sparks. Everyone can look at the Richmond piece on the power plant and the signs on Broad Street and feel a sense of community.

“Richmond has such an amazing amount of history, both righteous and shameful, and I would like to think that my work helps to keep it as a topic of conversation. Being proud of where you are from, knowing your history, and cherishing the things that make our city unique.”

In getting to know these diverse artists, this word “conversation” keeps coming up. Go look at the art and, more importantly, have a conversation. Alongside a lot of conflict among us is even more commonality. Foremost of which is adoration of our rich city and the river that runs through it. El Kamino reveals a lot of sincere love for RVA in our conversations. But it is his painting that speaks a thousand words.

Books, Bikes and Beyond thrift store at 7 W. Broad Street will be hosting an installation of El Kamino’s work beginning on July’s First Friday (July 6th). Check out the installation, then go see the James River signs a block away and plan your next Saturday.