Meet me at the murals: HENSE hangs “Loose” in Richmond

His paintings hang in the halls of international corporations, grace the highways of Atlanta, and appear on the sides of Kias. Now we have a HENSE’s in our very own city, and it happens to span 1200 square feet. His paintings hang in the halls of the finest international corporations, law firms, and hotels; fill the collections of the most exclusive collectors; grace the highways of Atlanta; and appear on the sides of Kias. Now we have a HENSE in our very own city, and it happens to span 1200 square feet.

All in RVA truly appreciate his grand addition to April’s RVA Street Art Festival (RVASAF) on the Canal Walk. The dizzying array of beautiful expression he left behind blesses what was once one of our most barren sights. Even better, the sentiment is shared. About the location of his latest large scale mural:

“I really loved it. I enjoyed the history of the building. I think being there by the river was really cool as well. It made for a very inspirational area to create in.”

Born and raised in Atlanta, Alex Brewer, better known as HENSE, has been painting for about twenty years, making him one of the true veterans at RVASAF. His client list includes AOL, Atlanta Beltline, Adidas, Sprite, Hilton Hotels, TED, T-Mobile, Ford, and Kia. He’s created commissioned public art for the City of Atlanta on the Beltline, the Shops Around Lenox, and for the permanent collection of public art at the Atlanta Office of Cultural Affairs. After a humble beginning roaming the roads with a spray paint can as a young man, his career has recently exploded like the pastel shapes and scribbles of his paintings.

HENSE has also painted in numerous cities outside of Atlanta and abroad in Spain, France, Japan, Taiwan and Mexico. His work has been exhibited in galleries in Atlanta, Richmond, Los Angeles, Minneapolis, Miami, New York, San Francisco, Tokyo, Taipei, and Barcelona. His resume seems to have no end.

I caught up with Beverly Reynolds, director of Richmond’s revered Reynolds Gallery in the Fan, while flipping through some of HENSE’s fine art work done on paper. Reynolds met HENSE as he painted at RVASAF and was drawn to his work. She quickly collected a stunning set of his drawings for her gallery.

“I am so thrilled to have HENSE’s work in Richmond. His drawings are inspired and fresh. A true talent on the rise.” 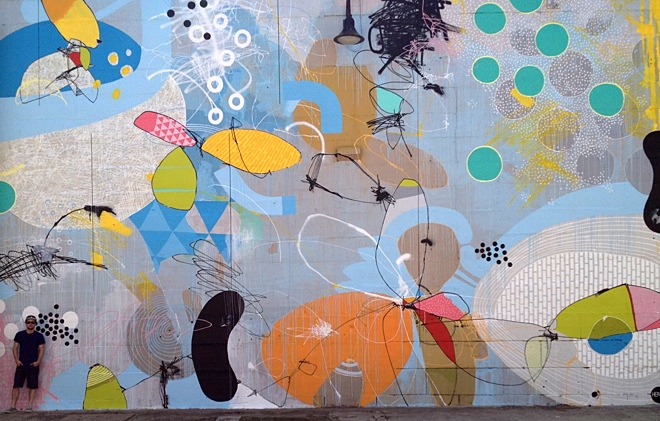 Unlike many of the other RVASAF murals, the lively Loose stands squarely in a frame.

“Because there were going to be murals to the left and right of the piece I thought it would be nice to keep it as a square or rectangle, like a giant painting. I generally like to work on exterior pieces in a very similar way I work on paintings in my studio.”

Only those precise borders keep Loose tightly bound in a box. It’s an inexplicable and agitated tangle of shapes, symbols, lines and marks, almost all of which glow in luminous pastel colors. For HENSE, art is where the real and the unreal intersect. He tells me his paintings do not intentionally represent any particular objects but he loves “that people can see things from their own perspective.”

Passersby may point out aqua bubbles, a white brick road, cheery white Cheerios, boundless bunnies, technicolor propellers, pink polka dots, or golden eggs. However the “what is it?” game seems to limit the levels of interpretation. If you gaze at HENSE’s gargantuan painting long enough you may embark on a roller coaster ride of emotions. Those twists and turns could leave you angry, inspired, perturbed, or peaceful. Despite the chaos along the way, ultimately arriving at a sense of serenity would not surprise HENSE, who points to the softer colors and natural peace of the location as features that distinguish Loose from the noisy bricolage of many of his urban murals. For HENSE, the painting process is its own journey.

“It’s about making a mess and then having to deal with it. The process was very layered and we basically made decisions based on what happened that day.”

Fine art, mainstream fame notwithstanding, labeling a graffiti artist like HENSE is a foolish game. However, his gestural splashes certainly bring to mind innovative abstract expressionists like Jackson Pollock, Franz Kline, and Willem de Kooning. For them, and for HENSE, painting is an encounter between the artist and the canvas. “I generally work on things in a very instinctive way. I paint, spray or draw shapes and marks, then decide on what stays and what goes.” The painting takes on a life of its own in the process. Remarkably, that often requires re-doing, re-painting, or destroying major portions of the mural during the course of its construction. Often several murals lie underneath each finished product adding literal and figurative depth to his paintings. Loose, too, is thick with three days of history.

“I try to never be afraid to paint over something or make changes. I think that’s when breakthroughs occur. Sometimes the part you hate the most about a painting becomes the most layered and interesting area once you’ve destroyed it.” 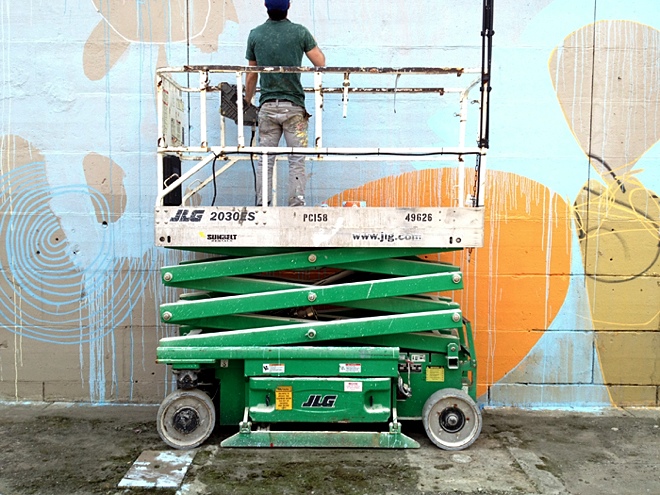 Directing this drama even impresses his peers. Muralist Mickael Broth, a long-time fan of his fellow artist, says “I think the wall I’m most stoked on is HENSE’s. Watching the way he worked was incredible.”

After hanging Loose on the Canal Walk, HENSE showed his crazy range with the spray can, placing an old-school piece on one insane, and mobile, canvas. Driving around the Fan you may stumble across a giant vintage Suburban Scottsdale taking up a number of coveted parking spots. Here you will leave the expressionist Alex and arrive at the graffiti piecing heritage of HENSE. As a nod to graffit’s roots in subways and on trains, the artist put some bubble letters on the “Burban” at the close of RVASAF and a tag for his crew, Mad Society Kings, or MSK. 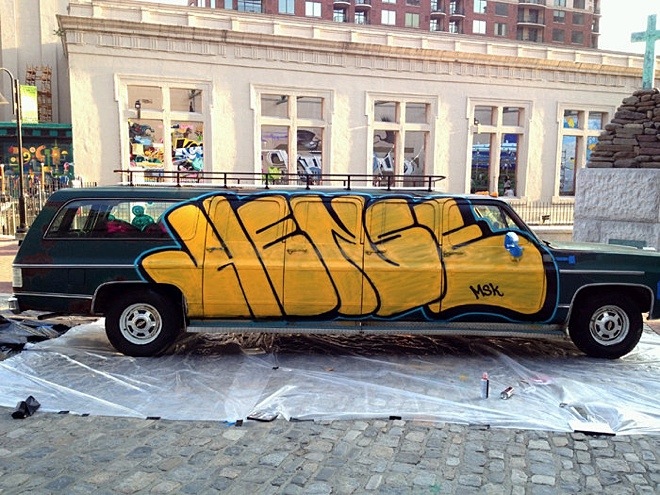 HENSE spent a short time at VCU way back in 1998 and thoroughly enjoyed his return to RVA for a little hang time.

“The event was rad. I can’t really say enough about how cool everyone was there. I’m looking forward to coming back to Richmond to work on murals in the future.”

Well then, what do you say we make this a regular thing?

In April, Alex left some amazing drawings in the good hands of the Reynolds Gallery. He has a solo show at Sandler Hudson Gallery in Atlanta on September 14th and a return to Virginia scheduled for this summer–to complete a mural for the Virginia Museum of Contemporary Art in Virginia Beach.