When Rumors opened, the owners, Casey and Marshe, had no money. Five years later their business is a Fan staple and they’re expanding to new digs. Out of desperation, Casey Longyear and Marshe Wyche posted to Facebook. Roughly two thousand pounds of merchandise and materials needed to move from Rumors Boutique on Harrison Street to the store’s new 723 W. Broad Street location. Within the hour, Marshe said dozens of people–friends and strangers alike–showed up. “It was a real motley crew.” The impromptu flood of help testifies to Richmond’s appreciation of Rumors and the store’s two young owners.

On June 1st, the pair celebrated five years of business partnership, and instead of planning parties they had just one month to find a new location. Their longtime landlord and owner of the adjacent Village Cafe, Herb Rueger, told Casey and Marshe that he wanted to build a yogurt shop next to the restaurant. He would need Rumors’ space, forcing the two to find a new location.

“We had to do this really fast,” said Casey last week. 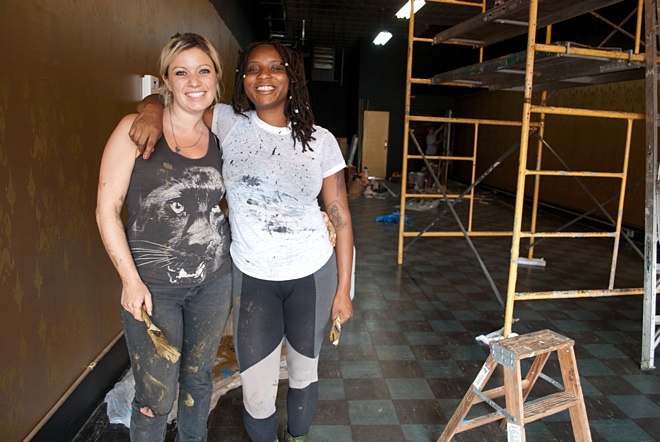 Not long after turning 21, Casey and Marshe (mar-SHAY) split a single bedroom in a house with other eight roommates. Casey had recently graduated from VCU with a degree in fashion merchandising, and Marshe had moved to Richmond for the punk and hardcore scene. “I used to be a missionary,” said Marshe of her teen years. “The church and the hardcore scene has prepared me for where we are now.”

Marshe and Casey had spoken about opening a business together before. They were noncommittal about the idea until Casey took a trip to Spain. One night, Casey texted Marshe: Do you want to open a store? Casey waited for a response, her phone buzzed. Yes.

The two composed a near 40-page business plan for Rumors. They outlined how they would create a boutique that catered to independent designers in their 20s, exposing Richmond to lines of clothing made in places like South Africa, Columbia, and other locations. The business plan was thorough, pragmatic, and would have been a pleasant surprise for loan officers at area banks–if they had bothered to read it.

“Banks wouldn’t even look at it,” said Casey.

With banks wary of a business partnership, Casey and Marshe decided to fund Rumors on their own. The two ate rice, avoided unnecessary expenditures, and saved money. Rumors opened on June 1, 2007. “The day we opened we had zero dollars,” said Casey. Although nearby Stuffy’s and Village Cafe had to donate food to feed them, the two had made it: Rumors was real.

But no one was buying.

While they were of one the few shops in the city selling independent clothing from designers around the world, college students were reluctant to spend the money. One year later, they decided to reboot Rumors. “We got rid of those items in three days and started over,” said Casey. They switched Rumors from an indie-focused retailer to a chic thrift store. Most of the initial stock came from their personal collections, donations from friends, and finds from around town. The new approach took off, and Rumors went from averaging 20 customers each day to having 20 people in the store at any moment.

To maintain the store’s inventory, Casey and Marshe continually seek out clothing and accessories. It often takes them beyond state lines. Last September, the two hauled 17,000 pounds of merchandise from Colorado, renting an Amtrak car to bring the items back to Richmond. This August, the two will travel to Los Angeles and attend a clothing trade show to hobnob with designers. They expect to return home with more than just their suitcases.

Rumors’ new location puts them on the edge of the First Friday’s Art Walk and next to the forthcoming VCU contemporary art building. Casey said that the new store will display and sell local art for under $50, with all of the proceeds going directly to the artist. They also plan to partner with Catholic Foster Care and Twin Oaks Commune to donate close to 4,000 items of clothing per month.

Despite owning Rumors for five years, Casey and Marshe were again denied a business loan to help renovate the new space. The nearly $18,000 that has gone into the location has been self-funded (“We’re really good at saving money when we have to,” said Casey). 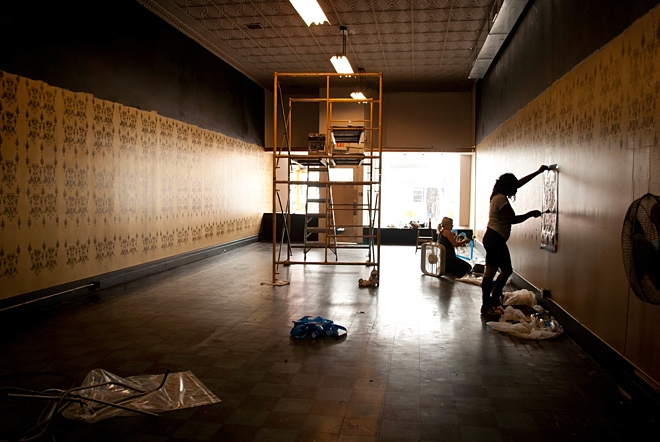 After their new Broad Street location gets off the ground, what’s next for the duo? They plan on locating a Rumors store outside of the state within a vibrant, college community. While they haven’t chosen a finalist, the two mentioned Greensboro, North Carolina or somewhere in California as possibilities. However, they are emphatic that Rumors will stay in Richmond. Part of the transition to the new store will be to “try to make a team to keep it running,” said Casey. Celebrating nearly 10 years in Richmond, Casey and Marshe are excited about Richmond’s economic and cultural potential.

“Richmond has always been on the cusp,” said Marshe. “We all need to start packaging Richmond as a whole.” She thinks that there is something for everybody, no matter what your age or interests. “You can make it happen here.”