HAVOC 4.0 was about Coach Smart and his players, but VCU’s decade of success transcends any one individual. A little more than four years ago, Coach Shaka Smart made a promise: “we are going to wreak HAVOC! on our opponent’s psyche and plan of attack.” For the fourth straight season, Coach Smart and the Virginia Commonwealth University Rams delivered on his promise.

The 2010-11 season was all about offense. Joey Rodriguez, Brandon Rozzell, Bradford Burgess, and Jamie Skeen were all very dynamic players that could score from anywhere on the court. They could defend and they could force turnovers, but HAVOC! was still in development.

With coach Smart’s recruits finally in place, the 2011-12 season was all about defense. The Rams struggled to score at times, but their stifling defense carried them to a CAA Championship and the third round of the NCAA Tournament.

2012-13 was the Rams’ high-octane 2011 offense meet their high-pressure, stingy 2012 defense–and the results were impressive. After a 3-3 start, VCU won 13 straight games. Despite making the leap from the CAA to the Atlantic 10 (and from the 146th strongest schedule to the 42nd strongest) the Rams continued winning en route a 2nd place finish in the extremely deep A-10.

Their offensive efficiency improved from 97th to 19th behind the consistency of breakout player Treveon Graham, the 3-point shooting of Troy Daniels, and a defense that finished 31st in the nation. They weren’t without their flaws, but the body of work is extremely impressive considering VCU was still in the CAA in May 2012.

The Rams’ season ended abruptly on March 22nd at the hands of five future NBA players and a former UR coach. Tonight Michigan plays in the national championship, and while VCU lost they never backed down from a challenge.

People had their doubts. Can HAVOC! work in the A-10? How will Briante Weber and Darius Theus force turnovers against faster more sure handed point guards? How will the Rams undersized front court play against bigger, longer teams? VCU answered by winning 27 games, they spent 7 weeks in top-25 polls, and they destroyed Akron, 88-42, in the NCAA Tournament.

The best part about VCU’s past decade of success is no one person owns it. The success transcends any individuals. Jeff Capel and Anthony Grant did incredible jobs, but they’re both gone. VCU has seen several athletic directors, dozens of players, and two very different university presidents, but the program’s rise has not faltered. Ryan Kopasci and Chris Crowley may be the program’s strongest ties to the days of Mack McCarthy.

Each person has enthusiastically contributed his or her little piece, and the product is one of the most special programs in America. A program worth mentioning in the same sentences as Gonzaga and Butler. A program with a big-name coach, a strong brand, the best pep band, 35 straight sell-outs, and the Naismith Student Section of the Year.

Welcome to the new standard, but of course VCU has no interest in a baseline or staying in the same place. Let the countdown begin, because the 2013-14 promises to be filled with even more progress.

It was the Ram’s highest anticipated regular season game of the year. Fans built Shakaville and Coach Smart even hand delivered pizza. The narrative was approaching an epic battle between two of the most successful young coaches in college basketball–someone forgot to tell VCU. The Rams smoked #20 Butler to the tune of 32 points.

Despite trailing by seven points with 37 seconds remaining in regulation, the Spiders forced overtime and beat #19 Virginia Commonwealth University, 86-74, in the Robins Center–but you probably didn’t need to be reminded.

ETSU isn’t exactly an A-10 caliber team, but when Troy Daniels crossed the state line between Virginia and Tennessee on January 2nd, he was in range.

The Hilltoppers turned the ball over on 10 of their first 13 possessions and were limited to 16 first half points. Before emptying the bench, VCU led 73-34 and WKU could barely get the ball across the timeline. 21 of Darius Theus’s 31 defensive possessions ended in turnovers. The bottom line: HAVOC! was wreaked. Oh yeah, and this happened: 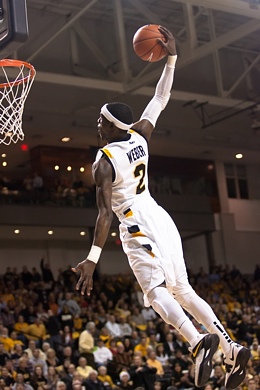 Darius Theus and Troy Daniels are special players whose names will live on in the VCU record books for decades. Losing starters isn’t easy, but on paper VCU looks to be an even better team next season.

Leading scorers and rebounders Juvonte Reddic (14.4 PPG, 8.3 RPG) and Treveon Graham (15.5 PPG, 6 RPG) will headline arguably the top front court in the A-10 next season. Both earned second team A-10 honors this season, and both could end up on the first team next season.

The backcourt has more question marks and the ceiling for the 2013-14 campaign could be decided by the point guard position. Briante Weber is the heir apparent in a long line of spectacular lead guards. After Eric Maynor, people had their doubts about Joey Rodriguez. After Rodriguez, people had their doubts about Theus. Weber has the tools to be great: he’s an elite defender, an incredible athlete, and he has shown ability as a distributor. If he works hard this summer, he could be a stat sheet stuffer next season as a starter.

Troy Daniels hit 124 3-pointers this season, and that probably won’t be topped by anyone wearing black & gold for a long time. The Rams will have to replace those 3-pointers by committee. Rob Brandenberg, Treveon Graham, and Melvin Johnson will get more looks, but Jordan Burgess could benefit from the opening at the 3-spot the most next season. Recruits Douglas Brooks and JeQuan Lewis could also do some damage from 3-point range in their limited minutes.