Catching up with Ryan Kopasci of the VCU Pep Band

Ryan Kopacsi took over the VCU Pep Band at the young age of 19. Now entering his 15th season, Kopacsi’s presence is a fixture at VCU basketball games. Ryan Kopacsi took over the VCU Pep Band at the young age of 19. Now entering his 15th season, Kopacsi’s presence is a fixture at VCU basketball games. “The Peppas” have been recognized by the media across the country for their huge sound, constant innovation, and radiating enthusiasm. Their presence at the Siegel Center, CAA Tournament, and NCAA Tournament has certainly changed the course of games. VCU’s most powerful ambassadors, the pep band captured the imaginations of America in 2011 before becoming the Men’s Final Four Battle of the Bands Champion.

Aaron Williams: How does the move to the A10 affect the pep band?

Ryan Kopacsi: The move mostly affects us because we’ve got to learn a whole new set of fan bases, players, and coaches. We like to be antagonists at games so we will have to work extra hard this year to learn who our foes are. Obviously not having the A-10 tournament in Richmond is quite different, but the kids get pretty pumped for trips, especially to Brooklyn.

AW: Which CAA team will you miss cheering against the most?

RK: Always ODU. Beating them is always the most fun. Of course a close second to them in Richmond, so we still have a team that we can fight back and forth with.

AW: “The Peppas” are an establishment in college basketball. Even ESPN’s Dana O’Neil called you the best pep band. When you took over the band at 19 years old, did you ever imagine it would become this big?

RK: I had no vision at 19. I think vision is a very mature concept, and not that I’m very mature now, but at 19 I certainly had no vision. It was all off the cuff. It has, though, indeed developed into our own brand–something I am extremely proud of. We are an extra dimension to the game. I love for the local media guys and the national media to recognize us. It means we are doing something more. I by no means want to be your average show, I want people to remember us. I want kids to say “Mommy, daddy, I want to be in the band!”

AW: A decade ago, average student attendance to games was under 500. The band was instrumental in developing a status quo of rowdiness. How have things changed in the past ten years?

RK: The trend has been up, up, and away. It’s really quite amazing. All along the band’s mission has been to entertain and support the teams. I think such energy is infectious. Mix in some really smart people behind the scenes and high profile coaches, players, and wins and its the perfect storm for what we have going on right now. Still, it can be better. 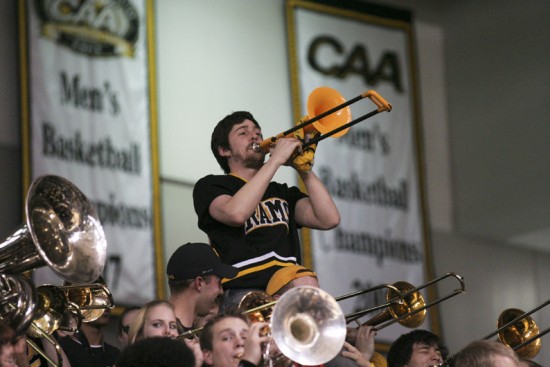 AW: What kind of growth has the pep band experienced since the Final Four, and even after last season’s success? Do you limit membership? Do you have limited seating in the Siegel Center?

RK: We do indeed have limited space, however I must not have reached it yet because no one has ever said anything to me. We take people based on auditions, and I have to this day never turned away any person who could play, that wanted to play, and could make the commitment.

AW: It seems as if the Peppas play constantly. How many and what kinds of gigs does the band play outside of basketball games?

RK: Great question! This is what people don’t realize. We play ALL year. We play soccer, volleyball, field hockey, NASCAR, Flying Squirrels, charity events, golf tournaments–the list goes on and on. We even play on the street just to play. We enjoy what we do. We like getting out and sharing music and the positive energy it creates. We want Richmond to share that experience with us, so whenever feasible we do that!

AW: What is your favorite moment from the past 14 seasons?

RK: A couple come to mind. 2007 when Maynor hit the shot to beat Duke was huge. I was screaming so much I thought for sure my head would explode. Last year CAA tournament playing GMU and winning in the first half something like 32 to 6. The whole trip to the Final Four capped off with winning the Final Four battle of the bands! And having Scott Van Pelt talk about us on his national radio show. My goal however is to make Sportscenter or have a small feature on us. The amount of desire, passion, and work thats goes into our product deserves it I think. I would love to see that displayed on a national platform.

AW: If Ram fans or the Athletic Department could change or improve one thing to take the Siegel Center to the next level, what would you recommend?

RK: Thats a tough question because we always try new things. Some work, and some don’t. Some are big things and some are small. All in all I think what we have is pretty special, and its going to be hard to take another big step forward, but I’m sure we will somehow.

AW: River boat rides. Bagpipes. American flag pants. The band never ceases to explore new territory. Can you give us any hints about the upcoming season?

RK: No hints as of yet…just some new music as we try to get some different stuff every year. Different stuff you don’t hear other bands playing. Hopefully another Final Four battle of the bands trophy and a national title for the team! 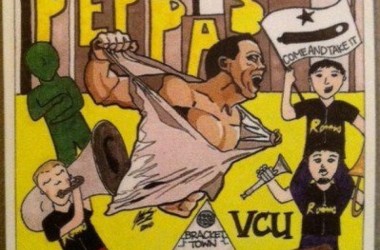 The Peppa’s debut album can be purchased in the lobby at all VCU basketball games.