Electric Football: This convention’s gonna be a ball Check out Nathan Cushing’s piece about electric football (and the art show it inspired) from back in 2013. It is intriguing!

There’s a big convention rolling into town this weekend that’s got a lot of people excited, and you’re in the right place to read about it! Pack your best gear and grab your favorite team’s jersey, because this is THE place to be for big fans and hobbyists and even spectators. The 2015 Electric Football World Championships and Convention begins this weekend in our fair city!

“What on earth is electric football?” you might be asking, that is, if you’re anything like me. Being the intrepid reporter who’s all about quirky sports, I set out to investigate the matter.

Electric Football is a tabletop sport for fans of traditional NFL football, created by Tudor Games. None of that Madden NFL for these players! And to make it that much more unique, the game also incorporates creativity in the form of game pieces that you can paint yourself.

“A very dynamic game of chess” is the way Jerry McGhee put it when I asked him to explain the game to me. McGhee is on the Miniature Football Coaches Association, a group that (despite its name) is small only in regards to the game they play. Their enthusiasm looms large, and as far as I could tell from McGhee’s account, they are not teeny tiny minifig-sized football coaches. But let’s back up a minute. 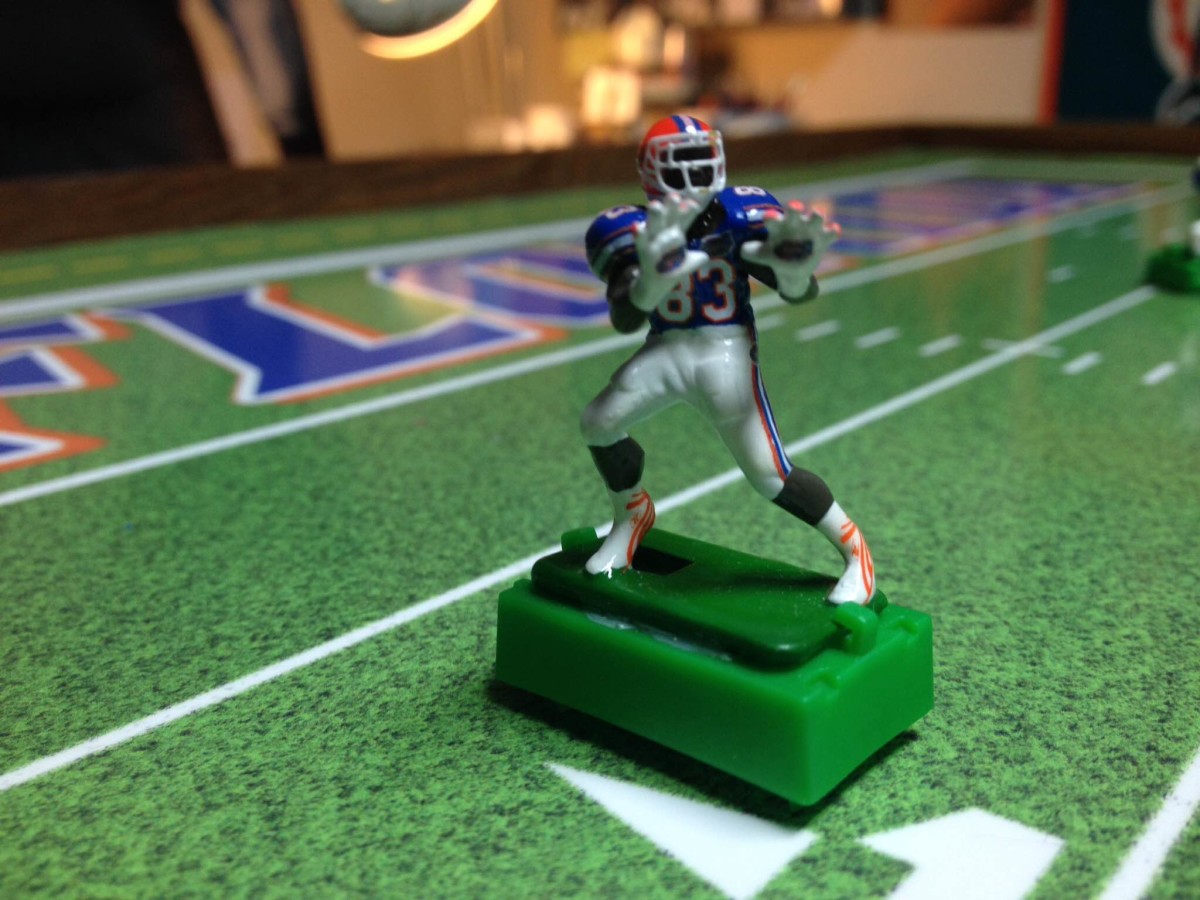 “What drew you to electric football?” I asked McGhee.

“My brothers had it when I was a kid, and they used to play with their sets, and then when I got my own set I mowed enough lawns to buy my own from the Sears-Roebuck catalog. That was the day’s Amazon.” It was a big purchase for him. “For being seven, eight years old, $20…” he laughed “Might as well have been $200.”

The competitions, he explained, have a set of rules that allow people to “live vicariously through your little men as much as you need to, but don’t be a jerk. Be cool. Keep your head about you. It’s a hobby and they’re there to have fun, and competition can get quite intense because literally and truly you built your team, your squad, and you coach it, and you can make it go the way you want it to go.”

On coming back to the hobby as an adult, McGhee pointed out one of the best things about being an adult with a hobby, whether it’s painting electric football figurines or collecting action figures: “We’ve rediscovered [electric football] as adults and discovered, hey, we make money now, we like this hobby…Then the Internet came about, and that created idea-sharing and connection, and we all stayed connected. I’ve been back in this hobby for 19 years now. I’ve got friendships with guys from all around the country, and we get together a few times a year, we compete, we fellowship with each other. My god, we’ve been through each other’s kids being born, divorces, deaths, marriages, remarriages, you name it, we’ve been there for each other.”

The Internet has without a doubt made a huge impact on keeping the sport alive. “We’ve got this neat little fraternity of guys. It has no bounds on social status, really; we’ll take you as you are. As long as you’re willing to play electric football and enjoy each other’s company, that’s all we ask. If you’re a gamer or a CEO of a company…we have a full range of employment.”

Of course, as McGhee pointed out, the love of football is definitely a trait among players of the electric variety. “Usually if you’re attracted to electric football you’re also a football fan some way or another. You may not have been able to play the game due to physical limitations or…couldn’t stay competitive. What electric football does is [it] makes you a coach. Your players don’t talk back to you, it’s all in your head–you make ’em go the way you want. It’s like a moving chess board. You’re playing a very dynamic game of chess with your opponent who’s an actual physical human being who’s three feet away from you who’s trying to score or trying to stop you from scoring.”

And the banter is definitely something unique to this “fantasy” version of football IRL: “I’ve listened to my son play online Xbox games and I’ve listened to the chatter and thought, ‘Wow, this is really unrefined.'”

“That is one way to put it. So you really have to have some decorum with this?” I asked.

“We do,” McGhee confirmed. “We have some social expectations–we welcome you as you are, now behave yourself, and have fun.”

So it seems like if you’re looking for a fun hobby that ticks off all the boxes of promoting good sportsmanship and decorum, being open to players of all ages, and isn’t something that ties you to a digital screen, electric football might be the game for you. No training camp required!

Ada Gallery presents the Electric Football™ Game Art Show, which opens Friday, July 31st. The Main Event, the 2015 Electric Football™ World Championships and Convention will electric-kick off Friday, July 31st at 5:00 PM and run through Sunday, August 2nd at the Four Points Sheraton–Richmond Airport, 4700 Laburnum Avenue. Don’t run through the convention shouting “JERRY MCGHEE! I AM A HUGE FAN!” even though you definitely want to by now.