It may be a relic of the past, but the history and art of the old-school game has plenty of life left in it. Way before ESPN, Madden video games, and even the Super Bowl itself, millions huddled around a small-scale football field they’d pump with electricity and watch as teams of plastic men vibrated and jostled to either their charged failure or electric glory.

Electric Football was once the football game played in American homes, having sold over 40 million units since it debuted in 1949. But it’s dominance faded with the rise of digital devices. Now the game occupies the occasional hobby shop and eBay auctions visited by enthusiasts.

But on August 2nd, Electric Football will once again have its day. The ADA Gallery will premiere “The Electric Football Game Art Show” featuring handcrafted boards and roughly 1,200 hand-painted figurines crafted by the game’s devotees. In addition to seeing both retro and modern players personified by the careful hands of hobbyists, visitors will also learn about a game that helped popularize the NFL and just might have a renaissance.

In 1968, Earl Shores had his “best Christmas ever.” The Philadelphia native received a Tudor Games Model 620 Electric Football set featuring the Browns and the Giants.1 He likens the gift to Ralphie’s in A Christmas Story: “[It] was my red rifle BB gun equivalent.”

Co-author of the recent book The Unforgettable Buzz: The History of Electric Football and Tudor, Shores knows the game’s historical playbook.

“The NFL was still somewhat fledgling” in the 50s and 60s, Shores said. As a result, the NFL began to market itself to bolster its brand and lure people to games2 in an age without the 24-hour coverage and merchandise we now take for granted. “You didn’t have [those] things,” he said. “You didn’t have ESPN with highlights.” 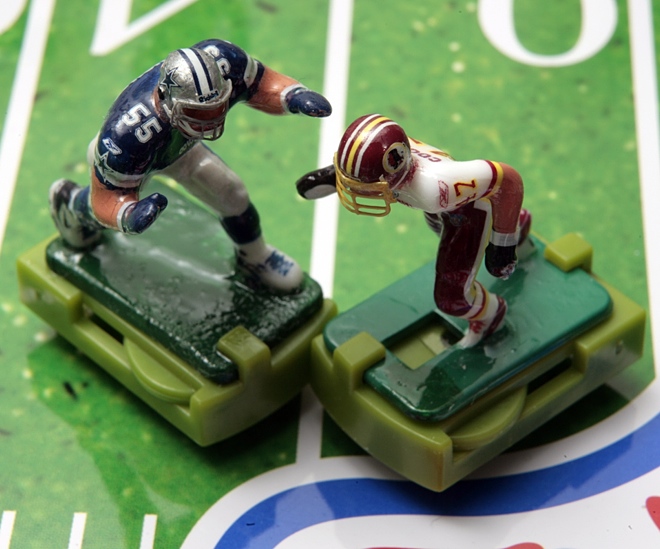 Hence the beauty of Electric Football. “Tudor put the NFL in your living room, on your floor,” he said. “There was nothing else like it…you had a stadium in your house.”

After Shores received his Electric Football set, he mailed a $3 order for two sets of Eagles teams (both white and green jerseys, $1.50 apiece) to have his team play in his living room when he wasn’t watching them on television or at Franklin Field.

Players like Shores would line up their teams like real-life coaches to run specific plays. Attached to each plastic figurine was a pronged base that propelled the men forward or backward when players flipped a switch and electrified the field, creating the buzz for which the game is known. “Some of your guys could go better than others,” Shores said. So some players became crafty, taking lighters and weights to figurines to alter how they moved during play.

But even with these alterations, Electric Football games were seldom played with the fluidity and grace of real football players. Figurines would topple over, move merely an inch, or run the wrong way. But occasionally, “some moment would be like real football,” Shores said. “And that would be enough.”

Still talking about it

Electric Football turned out to be the marketing tool the NFL had wanted. The game put a semblance of professional football in every home.

“It’s one of the reasons I fell in love with the NFL,” said Chris Bopst, organizer of the upcoming ADA exhibit. “If you play it right, it’s the closest you can get to football without physically playing it.”

Bopst was about 8-years-old when he received his first set. One of the people that encouraged him was his neighbor who happened to be a former Detroit Lions player, and was the then-assistant coach for the Washington Redskins, LaVern Torgeson. Not only did Bopst talk with Torgeson, he would also see and interact with Redskins players just hanging out at the coach’s house across the street. 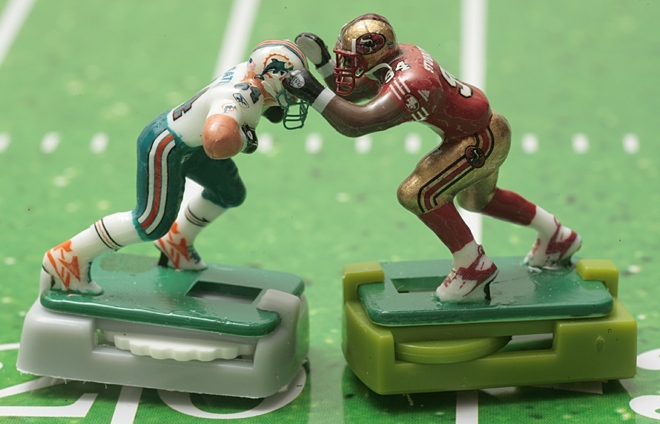 “Football to me was very personal because I could see the guys,” Bopst said. He and his brother started collecting Redskins figurines “so we’d have the players that we’d met” in real life.

Bopst has fond memories of playing Electric Football, memories he has no interest in letting go. “One of the guys I played with is a professor of religious studies at Brown University, and we still talk about Electric Football,” he said.

But when Bopst entered high school, the appeal of Electric Football lost out to music and girls. Bands and females weren’t the only opposition to the game’s popularity. It had a much more formidable opponent.

In the late 1970s, Mattel released its first electronic football game. It was the beginning of the end. “You could see where things were going,” Earl Shores said. “There was no going back once you had had handhelds.”

Even Tudor could see the future, re-focusing its efforts on selling NFL Huddles, miniature versions of team mascots. And as electronic games, and gaming systems like Nintendo and Sega, boomed in the 1980s, teenagers and young adults saw Electric Football as an obsolete relic. It would even become the subject of comedic ridicule in an episode of The Critic:

But the 1990s brought a “toy collection surge,” Shores said. People who played Electric Football in the 1950s,60s, and 70s began reassembling and building up their collections to, as Shores put it, “touch” their childhood. The internet has “made it much easier to find games and teams” than ever before, he said.

One of the first things Chris Bopst typed into his search engine after getting internet access in 1997 was “Electric Football.” As it did with others, the search results immediately flooded back memories of his childhood. It was hard to resist. “I bought some of the new players…I got a bunch of teams,” he said. 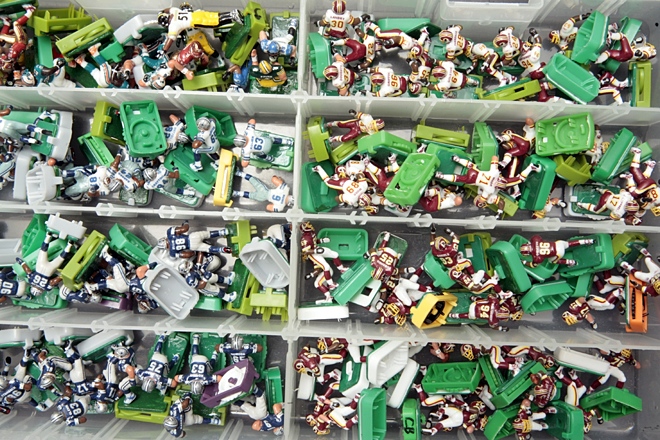 He also learned that Electric Football lived well beyond the shelves of collectors: there are local leagues and tournaments that still preserve gameplay. Some of that is captured in this ESPN segment:

And he learned that there are artists that meticulously paint individual figurines, even entire teams. “Guys will spend 50-60 hours on [them] painting,” Bopst said. “I mean, these guys work with jewelers glasses.”

Doug Strohm said custom painting existed back in the 1960s-80s. But more recently, fans were now trying to paint figurines to make them more real, sometimes with dizzying command.

“People paint soldiers and model cars, so it’s an extension of that phenomena (the sports version of D&D?),” he said. “It adds to the whole idea of making the game as real as possible. The work is truly amazing.”

These painters, and those collectors and players who commission their work, have injected new life into the old game. But if Electric Football is going to live on, it must go beyond hand painted figurines. It must touch the childhoods of today’s younger generation.

And it will if Doug Strohm has his way.

The future of buzz

Doug Strohm grew up with four sisters in rural Ohio where there was little to do in the winter. He passed the time by playing Tudor’s electric baseball game. In 1977, at the age of 15, he created his own derivation. But instead of developing it, he went to college in California and later worked for IBM and other software companies.

“I’ve always been in high tech, but I always had it in the back of my mind to return” to games, he said.

He returned to them in a big way on February 8, 2012 when he became the third owner of Tudor Games. Not only did he develop and release the baseball game he created 35 years prior, Ballpark Classics, but he also committed to make Electric Football, and other old games, relevant in the modern age. 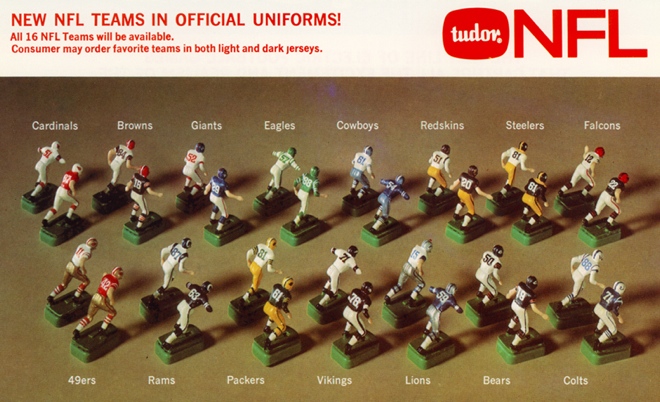 For instance: since 2007, Tudor has been without the NFL license that helped propel its popularity. As a result, subsequent sales of Electric Football sets have not featured NFL teams like they once did, but rather teams painted either red or white. Strohm is currently negotiating with the NFL give Tudor those rights once again.

Another way he plans to make Tudor games more relevant is through bringing physical games to market with “virtual and digital elements to it.” While not going into specific details about this, he hopes that games with digital add-ons will arrive in 2014.

But as he eyes Tudor’s future, he still recognizes the “core group” of Electric Football fans and enthusiasts who have helped the game endure over the years.

Chris Bopst decided to highlight the work those fans and enthusiasts have contributed shortly after it was announced last year that the Redskins would move their summer training camp to Richmond. He thought the artistic quality merited an exhibit.

But when he talked about his idea with artists, he found pushback. Many artists snubbed the notion of treating a football game as art for no other reason than “because its football,” he said. Sports, in any shape or form, can’t be art.

Conversely, many of the Electric Football figurine painters also snubbed his idea, albeit for a different reason. “None of these guys think they’re artists,” Bopst said. This initial resistance from both camps motivated Bopst all the more. “That really solidified it for me, that sort of juxtaposition of the different cultures,” Bopst said.

He’s curated an exhibit featuring roughly 20 artists and 1,200 figurines from across the country. Bopst said rows of miniature players will line the gallery’s walls, with various boards and historical miscellanea from “games going back to the 50s all the way up to the modern day” also on display. And people will have the opportunity to buy individual figurines and teams from some of the artists.

Tudor’s president, Doug Strohm, said attendees will be impressed why what they see: a “depth of detail that artists have put in painting a plain white plastic figure…[turning it into] something amazing to look at.”

If not still amazing to hear.