“Get on your broom!”

There aren’t many sports that begin with such a shout, but that’s exactly what echoes over the field. You have to stay straddled on your broom when you’re playing Quidditch. It’s one of the rules. Luckily, being able to fly on your broom isn’t.

“Get on your broom!”

There aren’t many sports that begin with such a shout, but on this (almost) warm Sunday in February at Petronius (or maybe, just for today, Patronus…) Jones park, that’s exactly what echoes over the field. Everyone’s warming up, and a few team members playfully bludgeon their teammate, who dutifully stays on his broom while shouting at them to do the same, even as they continue to toss volleyballs his way. You have to stay straddled on your broom when you’re playing Quidditch. It’s one of the rules. Luckily, being able to fly on your broom isn’t.

VCU’s Wizengamot Quidditch team was founded in 2008*. The team started practicing on a small patch of grass near the VCU Commons, and flyers were posted on bulletin boards all over campus in an attempt to round up enough players to form a team. Since that time, the team has gone to the Quidditch World Cup in New York, and has 6 golden Quidditch hoops that tower over the field — a far cry from the simple orange cones used to designate goal hoops in the beginning.

I chatted with Amber Cummings, one of the founding and still active members of the team, asking her to talk to me to me about the changes that have taken place since the team’s inception. One of the biggest changes is also one of the most recent: the team has added intramural teams in addition to the main competitive team. 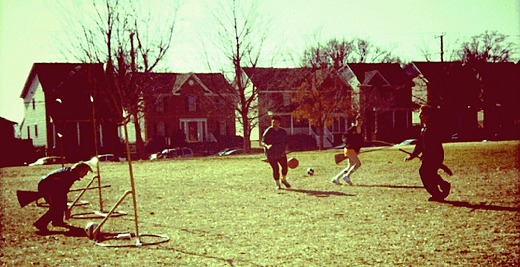 “Basically we have too many people — it got to the point where people would come to the games, and wouldn’t even get to play.” How many members did the team start with? “Six!” Amber laughs, then adds for comparison, “Now we’ll have 40-some come out to games…it’s crazy! With the intramural teams, now everybody gets to play.”

A call comes up from Jessica Jude (another founding-and-still-active member) for everyone to break up into their smaller intramural team units, and players begin to toss volleyballs back and forth, each member keeping one hand behind their back at all times, and straddling a broom at the same time. It’s tricky, and without the use of magic to stay on the broom in flight, standing while keeping a broom horizontal AND trying to catch a ball one-handed isn’t easy. It’s even harder when team members start running to make goals and dodge the Bludgers at the same time.

I should probably back up. If you’re going to be following a Quidditch match or two with me this season (you are, aren’t you? It’s swell, and you’ll be pretty sad if you decide to skip it) you’ll probably want to get some of the basics nailed down.

In Quidditch and Muggle Quidditch (that’s Harry Potter book Quidditch vs Alas We Can’t Fly Quidditch), there are several different positions: there are Beaters, Chasers, a Keeper, and a Seeker. And the Golden Snitch of course. 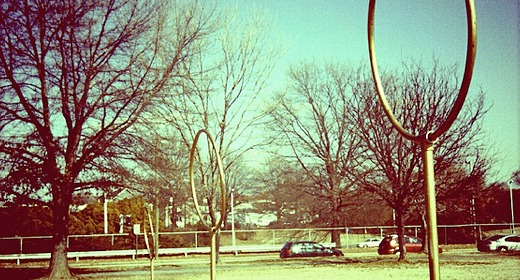 The Beaters “knock out” other players by tagging them with balls called Bludgers. Chasers are the goal-scorers, and the targets for the Beaters who try to knock them out in order to prevent them from scoring those goals with the Quaffle (another type of ball, not to be confused with a Bludger). The Keeper is the goalie, and the Seeker has the job of capturing the Golden Snitch Runner.

The Golden Snitch seems to be the common area of confusion regarding Quidditch (aside from the isn’t-this-game-meant-to-be-played-in-the-air? question). I was rather confused myself about how it could work when I first learned of Muggle Quidditch. After all, the Golden Snitch in the books is a small winged orb that is neutral to both teams, and if the Seeker catches it, then the game is officially over. Since in Muggle Quidditch, there is no such luxury of a sentient winged golden orb, there’s a person playing the part of the Snitch. But how can a team member be neutral to his or her own team?

Amber sighed ruefully when I asked her this question before she ran to join her team. “I wish that we could have a neutral Snitch, because sometimes they aren’t as impartial as they’re supposed to be. But, at the World Cup they purposefully set it up so that nobody ever gets their own Snitch in their own game.” Still, the Snitch Runners know that they have the job of being impartial, and it hasn’t been a big problem.

So until Golden Snitches from the Harry Potter universe become readily available (I’m looking at you, innovative inventors of the future), the Snitch is a Muggle. And really, all the better, since it’s a superbly fun position to play — you get to dress in gold, and run around trying not to get caught while the scoring and chasing and bludgeoning takes place around you. It’s sort of like playing tag football with one other person (the Seeker) while another game is played at the same time. The International Quidditch Association rulebook states that “Snitch Runners are encouraged to be creative in their evasive tactics.” Creative evasion? Sounds like the best job description to me.

Back at Patronus Park (Petronius, that is — sorry, City of Richmond…it’s just such an easy Harry Potter joke to make), the official first team practice involving multiple intramural teams is underway. “Aim small, miss small!” is a common shout as Beaters take turns racing across the field throwing their Bludgers, and Chasers try to evade them while making goals with the Quaffle. One team member gets hit in the face with a Bludger, and for a moment there’s a check to make sure glasses aren’t broken, and then it’s right back to Beating and Chasing in the warmth of February sunshine**. This isn’t a game for people who don’t enjoy a good rough-and-tumble time. But it is most definitely a sport for people who can multi-task and fly on their feet (while carrying a broom).

Grab a Butterbeer (is that on tap at Crossroads now?) and join me as I regale you with the tale of the VCU Wizengamot team’s battle for victory against…well, we’ll see. Maybe they’ll play their close-to-home opponents, the University of Richmond Acromantulas (witty, U of R team – I like it), or the Christopher Newport Captains of Crucio (eep!)…whatever the lineup, it’ll be coming soon to a Quidditch pitch (that’s the playing field) near you!

Want more? Make sure you watch our gameplay video of VCU’s Quidditch team!

*In the interest of full disclosure, yours truly was also one of the founding members, but then I graduated and couldn’t play on the school team anymore. Life isn’t fair, is it?

**Is there a magic spell to make this weather continue?