Important BRT dates—past, present, and future—and the dominos that had to fall in order for us to be where we are. Every day, our readers, our friends, and our countrymen ask questions-to us, to each other, to the City, to the Internet-about Richmond’s proposed Bus Rapid Transit system. A couple times a week, we’re examining one small piece of the BRT with a microscope. As we go, we’ll be compiling an easy-to-read resource for any interested party.

If something new comes up, you think we’ve missed an important component, or you have more data for us, feel free to let us know in the comments or submit a correction (see the options at the bottom of this post). We want to have a complete a picture as possible.

The full list of BRT FAQs will always be available for you to leaf through.

While it may seem like BRT has rapidly busted onto the scene out of nowhere over the last couple months, it’s actually been a consistent part of transportation conversations in the region for at least a decade. Below, if you’re so inclined, you can read through the chain of studies that began in 2003 and ended in 2014 with GRTC winning a $25 million grant from the feds. It’s a lot of boring dates and PDFs, but the key takeaway: this has been in the works since before iPhones existed.

All the way back in 2003, the Richmond Rail Transit Feasibility Study (PDF)1 looked at–I bet you can guess–the feasibility of rail transit in and around Richmond. One of its many recommendations was light rail down the Broad Street corridor, additionally the study noted that a more cost effective alternative to that could be a BRT.

Early 20082, the GRTC released their Comprehensive Operations Analysis (PDF) which laid out three phases of recommendations: 1) Immediate routing and service improvements, 2) Identification and implementation of transfer center sites, and 3) Development of a Bus Rapid Transit line. It’s that last one that we’re still talking about, sometimes in loud and angry voices, today. The COA laid out a BRT route that stretched from Downtown to Willow Lawn with an additional line from Main Street Train Station to Rocketts Landing. That should definitely sound familiar, as it looks super similar to today’s BRT route! 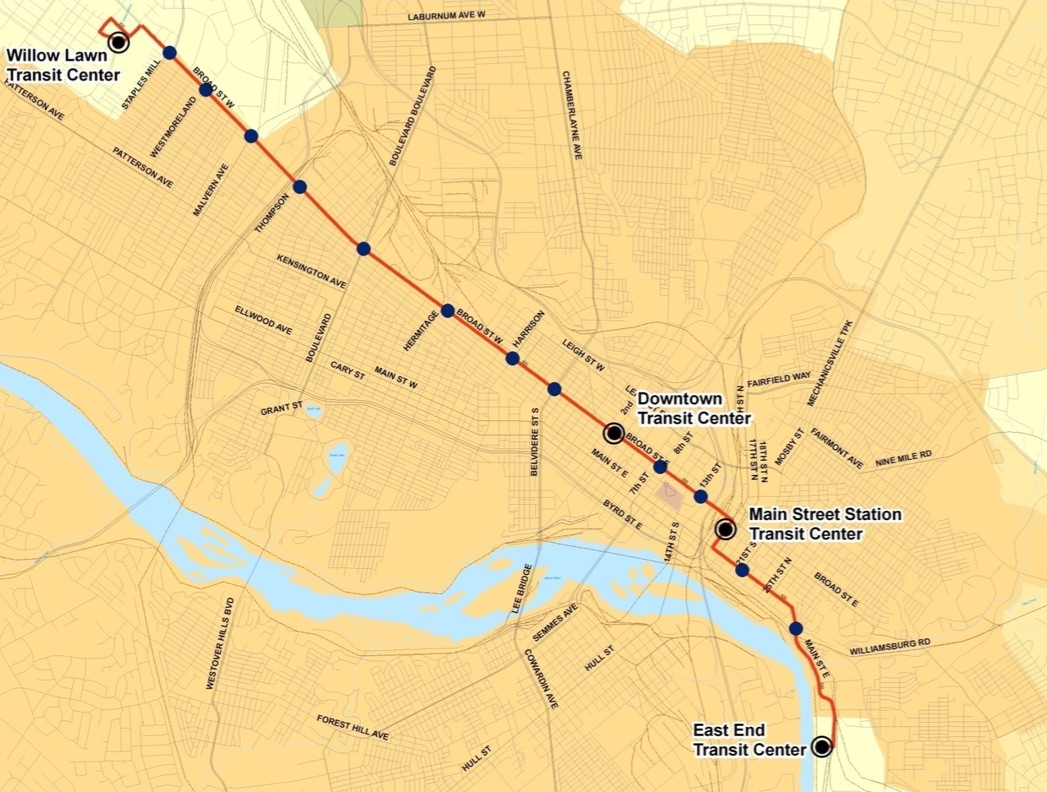 A map of the BRT route that has been available for about 2,500 days.

The 2008 COA projected that the BRT would be completed in 2012, which, oops! But hey, better late than never! Later that same year, the Richmond Regional Mass Transit Study (PDF) dropped, citing planned BRT systems in Albany, New York and Charlotte, North Carolina as possible models for Richmond’s own transportation needs. It also noted the substantial cost differences between light rail and BRT (5.5% of the capital costs and 24% of the annual operating costs).

And then who can forget 2009, the year we got a Downtown Plan (PDF)! I remember the charettes fondly! Anyway, as you can guess, the plan put the Broad Street BRT square in the “less than five years” category of transportation stuff to implement (oops, again!).

Over those next five years, though, GRTC worked on putting together the Broad Street Rapid Transit Study (PDF). Delivered spring of 2014, this is the foundational study for all things BRT–route, stations, fare collection, costs, everything. Meanwhile, in 2013 the Richmond Strategic Multimodal Transportation Plan (PDF) release put a Broad Street BRT at the very top of their high priority transit recommendations list.

Then, in April 2014, GRTC filed for a $25 million TIGER grant, which was awarded in September 2014. From there the project design kicked off with more documents, more public meetings, and lots of public opinion.

That about catches us up with the current timeline document, which you should totally familiarize yourself with: 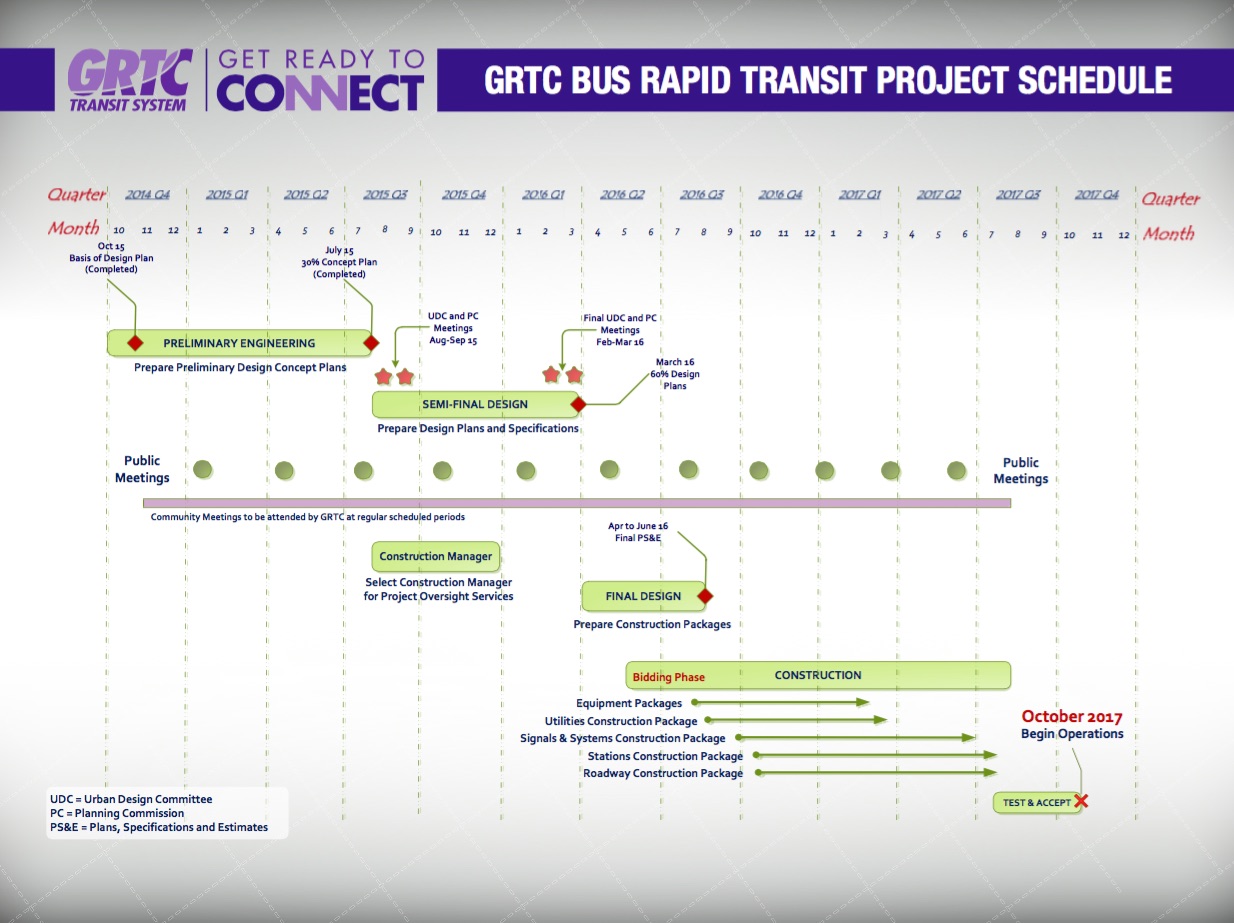 Here’s your map for future BRT progress. Get excited for October 2017!

The 30% design phase was just completed a couple of months ago and ended with even more public meetings that detailed some of the changes GRTC has incorporated from public feedback (things like: more parking, more left turns, wider medians).

In late summer 2015, both the Urban Design Committee and the Planning Commission approved the BRT 30% design phase and gave some additional recommendations, including converting the 4th – 14th Streets section to a media-running BRT.