Now you know what it is, let’s talk about where it will take you (literally, not figuratively). 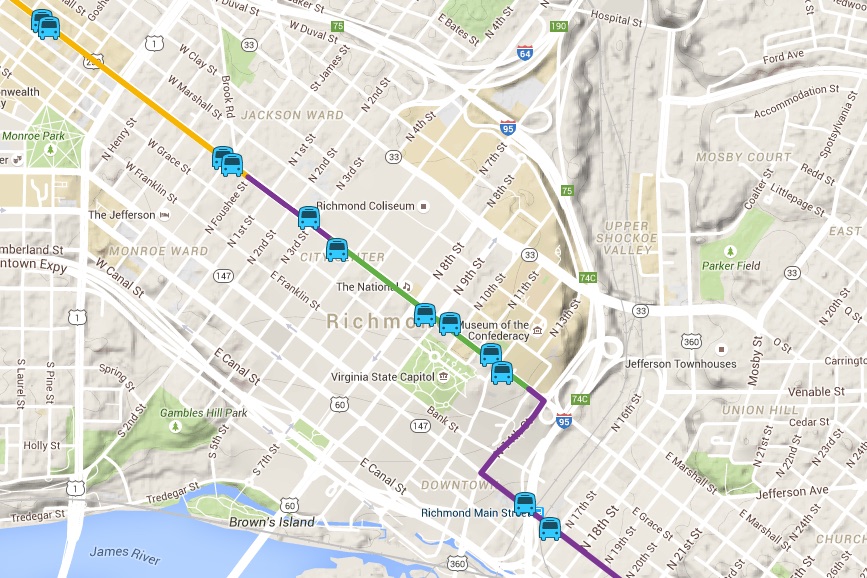 Every day, our readers, our friends, and our countrymen ask questions-to us, to each other, to the City, to the Internet-about Richmond’s proposed Bus Rapid Transit system. A couple times a week, we’re examining one small piece of the BRT with a microscope. As we go, we’ll be compiling an easy-to-read resource for any interested party.

If something new comes up, you think we’ve missed an important component, or you have more data for us, feel free to let us know in the comments or submit a correction (see the options at the bottom of this post). We want to have a complete a picture as possible.

The full list of BRT FAQs will always be available for you to leaf through.

So now that you know what even is a BRT, you’re probably wondering where does our specific BRT go and where it can take you. Allow me to present The Map:

If you’ve spent any time reading the one million public documents on the GRTC Pulse website, you’re already plenty familiar with this guy.

The GRTC Pulse route will stretch 7.6 miles, beginning (or ending, depending on how you look at it) at Willow lawn and ending (or beginning!) at Rocketts Landing by way of Broad Street and E. Main Street. While a single route, the buses will operate in three different modes:

As you take the GRTC Pulse from one end of town to the other, you’ll zip along at various speeds as the bus moves in and out of different modes. Despite the whole route not running through the median–its optimal, rapid home–you’ll still be able to make the whole trip, from end to end, in about a half an hour.1 That same trek would take you slightly longer in a car of your own and over an hour on a GRTC local bus.

But why Broad Street, anyway? Well, it’s the major east-west corridor in Richmond!

All the way back in 2003, the Richmond Rail Transit Feasibility Study (PDF)2 identified Broad Street as a place to locate new mass transit projects. In 2008, the Richmond Regional Mass Transit Study (massive PDF) and accompanying GRTC Comprehensive Operations Analysis (PDF) identified Broad Street as ripe for mass transit opportunities. The TIGER3 application, which is how we secured $25 million of federal money for the BRT project, has an entire section called “Economic Competitiveness” filled with maps (development potential, disadvantaged populations, population density, district features) supporting the Broad Street corridor as a great choice for BRT. But I think the 2009 Downtown Master Plan4 puts it best:

Broad Street is Richmond’s grand avenue and was designed as the widest street Downtown. Today it remains its primary image corridor and major spine for transit and pedestrian/vehicular traffic running east-west through the central business district and is remarkably intact west of 5th Street. It serves as the front door of state government, both campuses of Virginia Commonwealth University, City government, and the region’s tourism industry. The ten-block stretch of historic commercial buildings between 4th and Belvidere Streets, many with residential uses in upper floors, combined with historic and contemporary commercial, civic, and institutional buildings, reflect both the diversity and vibrancy of Downtown.

Plus, you can walk to many, many things from Broad Street, probably a million of which just sprung into your mind. For example, here are the walking distances from a bunch of Richmond’s breweries to their nearest BRT station.5

Here’s handy zoomable/pannable Google map if you want to see what else is nearby.