Oh, it’s easy, just divide the total cost by the number of miles and you get…a potentially really misleading number! Building a new bus line through the center of a city sounds like a time- and money-intensive task. But just how money-intensive? Like, a billion bucks, or what? Let’s wade into some numbers!

The total estimated cost of the 7.6 mile GRTC Pulse bus rapid transit line is $53.8 million. With a couple million already spent on preliminary engineering, we’ve got $49.8 million left in projected design and construction costs. That significant chunk of change is funded through four different sources:

Funding the Pulse (in millions) 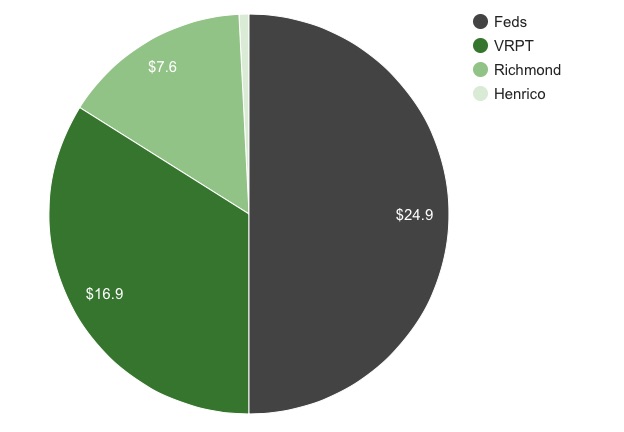 You can see how all that money gets allocated in the following table taken from the Broad Street Rapid Transit Study (Apendix A-13 (PDF)), which was commissioned by the GRTC, the Federal Transit Administration, and the Virginia Department of Rail and Public Transportation. Stations, sitework1, systems2, and vehicles make up the bulk of the costs. 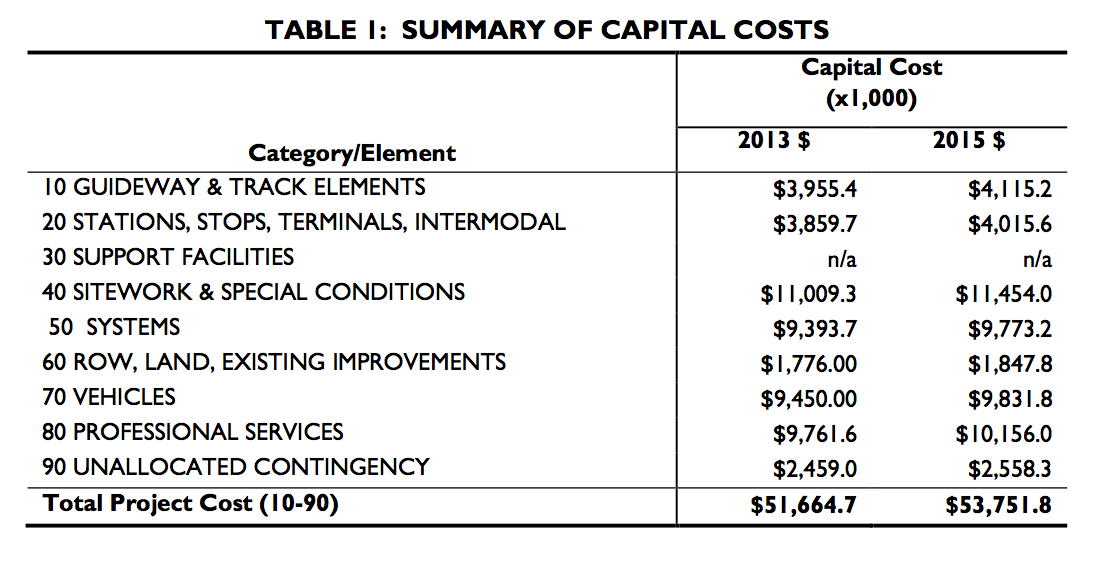 So for about $50 million in funding, with 84% of that coming from federal and state sources, Richmond gets the first major upgrade to our public transportation system in years? Decades? A long, long time.

The mysterious and misleading cost per mile

So how does the projected cost of the Pulse compare to other BRTs around the country? Turns out, that’s a really challenging question to answer. So much of any given transportation system is designed specifically to work with the existing geography and infrastructure of its locality that it’s hard to get a direct comparison. But that doesn’t stop armchair analysts (like myself) from mashing some numbers together and seeing what comes out the other side.

The most straightforward way to compare BRTs (or any route-based system) is cost per mile–it’s so easy! Just take the total cost of a project and divide it by length of the route, and boom, you’re done. The Pulse’s cost per mile is: $7.08 million. This is super cheap when you compare it to similar systems (which the Broad Street Rapid Transit Study does in Appendix 13 on page 4). But, cost per mile can be very misleading. Stay with me as I run through a few examples:

Our neighbors to the southeast built a light rail! Maybe we should be jealous! But maybe not, since the rail is built at sea level, and that place is slowly sinking into the sea.

Cleveland’s system is the gold standard for BRTs in America4, we probably should be legit jealous of this one.

Eugene is not Portland, but they are in Oregon, so they probably still have some of that West Coast transit magic.

So why is that misleading?

Part of the concern with the current Pulse plan is that, when compared to other systems around the country, $7.08 million per mile just seems so dang cheap. Surely that’s too good to be true, right? You don’t have to Google too hard to come across articles skeptical of the purported low cost of bus rapid transit. Here’s one from The Transport Politic in 2011:

Nor is the difference in costs between rail lines and BRT nearly as great as some would argue. The Journal article quotes Dennis Hinebaugh, head of a transportation center at the University of South Florida, saying “You can build up to 10 BRT lines for the cost of one light-rail line.” That might be true if you’re comparing a train operating entirely in its own right-of-way with a bus running in a lane painted on the street. [emphasis mine]

For Richmond, the part in bold is the case for significant portions of the current Pulse Plan. Only 3.1 miles of the entire (current) Pulse route have dedicated BRT lanes. Large sections on either end of the route are “mixed-traffic operations”–aka just a bus riding around as it normally would with some signal priority technology thrown in.

I’m not sure what the cost breakdown for each and every mile of the Pulse is, although I have a pretty good feeling that that data is buried somewhere in the massive stack of PDFs sitting in my Dropbox. Even without that information, we can guess that the 40% of it requiring ripping up roads and building dedicated lanes will be much more expensive than the 60% that does not. So you can see how cost per mile doesn’t always tell the whole story.

Here’s another way to look at it. And, please, keep in mind that some of these numbers are made up (and indicated as such) to illustrate a point that data can be grossly mishandled. Don’t you dare quote this out of context. That said:

The only section of the Pulse in Henrico is the western terminus and about 1/3 mile of the route. The county is paying $400,000 for that, or $1.2 million per mile. If we say that’s the cost of the mixed-traffic operations sections of the route (which is a bad and stupid thing to say) that gives us a cost per mile for the rest of the route of $15.61 million. That number is way more in line with what folks generally think a BRT costs per mile.5

See! Cost per mile! You’ve got to read a lot of information to really see what’s going on.