Much Ado About Nothing: Times sure haven’t changed

If you thought director and cult hero Joss Whedon could do no wrong, you’re…mostly right! 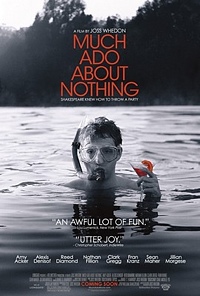 The following contains some mild criticisms that are difficult for me to even think, much less write. But in a world where an M. Night Shyamalan flick didn’t make me try to choke myself on popcorn, I guess anything’s possible.

I think it’s hard to do Shakespeare on-screen in a way that’s truly fresh. We’re so used to the galloping, over-emphasized-so-you-can-actually-get-the-meaning style that stage Shakespeareans so often employ (and they do so with good reason), but it seems rare that directors take advantage of the opportunity to get a little more subtle with it all. The major difference between screen and stage is the ability to go in for a close-up, allowing for whispers and minute facial expressions, right? With the driest and cleverest of all filmmakers calling the shots for this most reason adaptation of the bard’s most loved comedy, physical humor and genius timing abounds…but I’m not sure these actors are really cut out for this gig.

WHICH actors? Only the entire Joss Whedon line-up of greatness.

This crew is skilled at being funny and even being dramatic, but Shakespearean actors they are not. That’s not to say they didn’t give it their all, but their deliveries were forgettable at best. Tumbling down stairs and dog-paddling in pools—there’s where they shine. Luckily, there’s plenty of that to keep the film afloat.

But I guess you just have to work with the script you’re given. PSYCH! It’s the best script ever. Plus, Kenneth Branagh and Emma Thompson nailed it 20 years ago, so the bar is pretty damn high.2

Setting the story in a contemporary framework poses another set of problems, as the plot hinges heavily on Hero, the gentle daughter of the week-long party’s host, being a virgin. You could get away with nudging this into more of a “Oh no, Hero was caught cheating on Claudio” situation instead of a “Oh no, Hero was caught POSSIBLY THINKING ABOUT HAVING SEXUAL RELATIONS, but unfortunately, the script is all “Maid, maid, maid, maid, maidenhood, maiden, virgin, maid.” There’s just no getting around it. Branagh’s version worked fine, because it was set in the 19th Century and people were still dicks back then. In a 2013 environment, though?

Possibly the group of revelers and their returning…politician?3…are just fundamentalists of some sort of religion. But hark! The film leads with the post-coital shame of Benedick and Beatrice, an event that Joss uses to explain the whole “He gave me his heart once” speech that implies a history between the two.

Well, shit! No one gives a damn if Beatrice is a maid or not, I guess. She’s drinking champagne and doing lap dances on whomever she wants, just like the rest of us liberated ladies. But Hero talks with one dude out of her window, and her father wishes she would die rather than face the shame it causes her? It’s a distracting contradiction that nagged at my enjoyment throughout.

But even the weakest Joss is better than the strongest Every Other Director, and the comic framing, pacing, staging, and everything else, really, is top of the line, with special marks for Nathan Fillion as the ass, Dogberry. He and the always-entertaining Tom Lenk (Dogberry’s assistant, Verges) were the film’s buffoons, yet delivered some of the most fine-tuned acting in the whole production.

Gorgeous cinematography and memorable comedy make Much Ado a perfectly wonderful way to spend an evening and a solid addition to the Joss Whedon canon. I just hope this is the only Shakespeare he attempts.

You have heard of any of the above actors.

You just said, “Buffy? Didn’t that involve Luke Perry?” Just kidding, you don’t need to be a Buffy fan to enjoy this film, but you should probably not be Kenneth Branagh.

Technical pass. Hero and her maid speak briefly about what dress she’s going to wear to her wedding. But to be fair, I don’t think anyone has a conversation with anyone else in Much Ado without mentioning perforce the object of their desire. And to be super fair, William Shakespeare wrote this thing four hundred years ago.