The Avengers: a hulkin’ good time

The Avengers! Finally, after four years of methodically releasing individual superhero films, Marvel Comics finally had the pieces in play to create the most super of superhero films: the Superhero Supergroup Film. The Avengers! Finally, after four years of methodically releasing individual superhero films, Marvel Comics finally had the pieces in play to create the most super of superhero films: the Superhero Supergroup Film.1 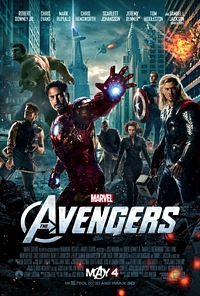 The path to The Avengers began with the 2008 release of Iron Man followed by The Incredible Hulk, Iron Man 2, Thor, and Captain America: The First Avenger. It’s a collection of movies called the Marvel Cinematic Universe, some wonderful (Iron Man) some…not so wonderful (The Incredible Hulk), with half a dozen more films planned.2 It’s quite a body of work. What’s impressive is the way Marvel has plowed forward, casting aside continuity3 and sometimes quality, racing towards the inevitable goal of The Avengers. It’s not all awesome, but it’s all extremely lucrative.4

While the execs over at DC Comics were sitting smugly in their Hall of Justice counting their Batman Begins money bags, Marvel Comics was busy re-acquiring the rights to all of their most popular intellectual property and starting to self-fund their own movies. It’s been extremely successful for them, to the tune of almost $3 billion worldwide, especially when compared to the other guys’ offerings.5 And the thing is, the other guys could be doing this very same thing with the Justice League! THE JUSTICE LEAGUE IS AWESOME.

So anyway, The Avengers. Things start off with a group of S.H.I.E.L.D. scientists tampering with the tesseract, an otherworldly source of power beyond all understanding. Things go predictably wrong and out of the tesseract pops not clean, renewable energy but super villain Loki (who’s charmingly played by Tom Hiddleston). Loki walks away with the tesseract and threatens to rule/end the world. The typical means of stopping a baddie–guns and bullets–don’t seem to work on Loki (he is a god after all) so S.H.I.E.L.D. head hancho Nick Fury (Samuel L. Jackson) decides it’s time to call in the reinforcements: the Avengers.

From there, we are introduced to earth’s mightiest heroes–Black Widow, Captain America, Hawkeye, the Hulk, Iron Man, and Thor–as the team is slowly built. Prepare yourself for the only complaint I have against The Avengers: The film is 143 minutes long and spends too much of that time backstorying and gathering the heroes together. Once the Avengers are assembled the pacing is wonderful and quick, but for the first thirty minutes the thing plods. Director Joss Whedon (The Cabin in the Woods, Firefly) is awesome at crafting not just compelling and witty scenes but entire movies. The first thirty minutes of The Avengers feels like it’s directed by another person.6

But who cares! Because once things get revved up and moving, they are great and fantastic! There’s action, there’s stunning visuals, there’s comedy, there’s Robert Downey Jr., there’s Mark Ruffalo, there are scenes with Robert Downey Jr. and Mark Ruffalo! You knew going in that RDJ + Ruffalo = something special, and it’s not that the other characters are played by wooden automatons (well, other than Scarlett Johansson’s Black Widow), it’s just that those two dudes are so good. Chris Evans (Captain America) and Chris Hemsworth (Thor) are well cast to play anachronisms and both have a couple of great moments, but it’s Iron Man and the Hulk that really shine.

Actually, the script shines too. For a movie that’s basically a two hour battle scene, there’s a surprising amount of really funny jokes and priceless physical comedy. It makes me want to watch a movie where The Avengers just do regular-type stuff as a group of friends. Whedon is aware of this: stay until the end of the credits for a kicker.

Finally, I wish you could have read this review last Friday morning, because watching a movie that lots of people really care about on opening night is pretty incredible. Think the crowd at The Hunger Games but in the polar opposite emotional direction. Guys, there was hooting and hollering–I may have hooted and hollered.7 It was awesome. If there is a reason to still see movies in the theatre it is to share an experience with several hundred other humans. This has value! It has value that you won’t find at home in front of your TV. But if you missed it this time don’t worry about it too much, the next Avengers movie is most likely just around the corner.

Actually, now that opening weekend has passed, you may just want to wait to RedBox it as you won’t get the experience of sitting in front of a row full of people who think the Hulk is the absolute coolest thing to have ever existed.