The Cabin in the Woods: don’t read this review

OK guys, realtalk: The Cabin in the Woods is wonderful. But if you value storytelling and surprise, stop reading this review right now. Some movies rely on familiar stories and patterns to make you feel comfortable. Some movies hinge on clever plot twists that are revealed in the movie’s final minutes1 to make you go “ooooooooh!” Some movies take a familiar pattern, introduce a twist, and reveal it at the very beginning of the film. Actually, maybe just one movie does that. The Cabin in the Woods is that movie.

OK guys, realtalk: The Cabin in the Woods is wonderful. If you’ve seen a ton of horror movies, or maybe you’ve been dragged to a ton of horror movies by your charmingly enthusiastic spouse,2 you’re going to enjoy every stomach-rending minute of The Cabin in the Woods. The problem is your very enjoyment hinges on the way director and co-writer Drew Goddard (Buffy the Vampire Slayer, Lost) cleverly plays out his cleverly written twist from the very first clever minute. Which, if I don’t want to spoil the surprise, makes writing about this movie difficult. So please, if you value storytelling and surprise, stop reading this review right now.

But if you hate fun (or have already seen the film), by all means read on. 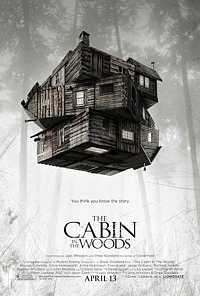 The Cabin in the Woods begins not in the woods but in the austere governmental office of two white-collar cubical types, Richard & Steve (Richard Jenkins and Bradley Whitford3), who are busy discussing (while doing a walk-and-talk4) their seemingly important, although incredibly vague and boring jobs. Simultaneously five teens ready themselves for your run-of-the-mill trip to an extremely creepy and isolated cabin in the woods.

Quickly, like immediately after the titles, you realize that the two plotlines are connected and that Richard & Steve are actually employed to guide these ill-fated teens to their IMPENDING CABIN-RELATED DOOM. As the story unfolds you learn that the standard horror movie conventions you know and love exist because of the guidelines Richard & Steve must follow while doing their jobs. Five young kids, cabins in the woods, splitting up instead of sticking together, last minute cave-ins, all of these are artifacts of The Way Things Must Be. This particular trip into the woods isn’t like a horror movie, horror movies are like this trip into the woods.

It’s all very meta or maybe even metameta. I’m not sure.

What Goddard and co-writer/producer Joss Whedon (Firefly, The Avengers) have set out to create is the successor (usurper?) to Scream. It’s a movie that, while being aware of the horror genre and making some pretty funny jokes at its expense,5 is still a tense and scary movie in its own right. Not only that, but the Richard & Steve storyline provides some awesome and well-timed comic relief until it is woven into the teenager’s storyline–that’s when (perhaps literally) all hell breaks loose.

I’m telling you, the thing is brilliantly written.

It’s also really well acted…in its own way: everyone involved delivers exactly the performance required of them. Which for most of them, turns out, is pretty ordinary and uninspired. But this is awesome! It’s part of the joke! Apart from the wooden and chiseled teenagers, you’re going to love the pants off of watching Jenkins (Six Feet Under) and Whitford (The West Wing) on screen together during the Richard & Steve scenes.

But seriously, there are so many wonderful jokes I wish I could share with you,6 but that would ruin everything. So I’ll just sit here in my office, chuckling quietly in the corner while I add The Cabin in the Woods to my Netflix queue.

Despite all the meta, humor, and metahumor, at its core The Cabin in the Woods is still a horror movie. If horror movies aren’t your thing, or if the thought of rusty, sharp implements stabbing through various body parts makes you lose your lunch, you may want to skip this one (BUT YOU’RE REALLY MISSING OUT!).