After Earth: An official non-bummer

Just when you thought M. Night Shyamalan couldn’t get any worse…he doesn’t? It’s his greatest twist! It’s long been a treasured hobby of mine to dissect the films of M. Night Shyamalan, the world’s worst big-budget director.1 The guy has made a dubious name for himself by incorporating lame and increasingly predictable “twists” into films that seem to become more like high school film projects as the years go by. His most recent atrocity, The Last Airbender, took the world’s best television show and turned it into a plodding nightmare.

We thought it couldn’t get any worse after that.

Well, hey! Turns out we were right!

Shyamalan’s latest twist is that HE MIGHT NO LONGER SUCK? And I’m as shocked as you are to hear it. I sat in the theater as After Earth spun out its drippy first scenes—my entire being alert and ready to pick up on every flat line and ridiculously simplistic plot device. I was ready to embrace the utter lack of feeling and spew out a vitriolic review with evil glee. Over the last hundred or so of Shamyalan’s films, it’s almost almost become a ritual. 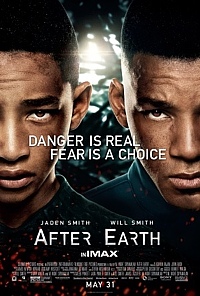 The film’s beginning was shaky—a quick establishing voiceover bringing us up to speed about how we assholes effed up our chance on Earth. Below it, stock disaster footage plays out. It’s not only trite and lazy (like Shyamalan likes it), but it’s almost identical to the opening of Tom Cruise’s latest sci-fi flick, Oblivion.

We move quickly past it, though. Just like in John Hillcoat’s adaptation of Cormac McCarthy’s post-apocalyptic fill-your-soul-with-despair flick, The Road, HOW Earth was effed isn’t important. The resulting scenario just provides an interesting framework upon which some very relatable family dynamics play out. Will Smith and his very lucky son, Jaden, could have explored these issues with a setting depicting any number of particularly abhorrent scenarios: hiking in the tundra, being stranded at sea, or navigating a regular, middle-class life filled with Nissans and Old Navy.

Prime Commander of all Humans (or something), Will Smith’s spaceship goes down on ol’ Earth, and…nuts! He’s got two broken legs. Guess who’s going to have to travel a few miles to get to the tail of the ship and grab a working rescue beacon in order to save them from this damaged, pissed-off planet? Tiny Will Smith! I have never seen or heard of an interview in which Jaden wasn’t acting like a complete tool, but I have to say…he might be a good actor? This role, at least, requires a very concerned, high-strung fellow, who looks at his dad with worshipful eyes and can sprint lithely over tree trunks and streams. Check and check! Will suppresses his “Aw HAIL no, I’ma lovable tough guy who’s about to crack a joke while I jump from an overpass onto the roof of a car” and allows himself to be a different kind of jerk—a grim, withholding one (don’t worry, he has a heart underneath it all).

Like I said, it’s very simple. Jaden runs around a lush, Amazon-like setting, solving problems as they arise and confronting his own fear. That last part is important, because there’s a human-killing monster on the loose who can literally smell fear, something that’s clearly oozing out of Jaden’s adolescent pores. The blessedly brief beginning doesn’t let us dwell in an embarrassingly cliche uber-clean future-world for long, and the ending may be wrapped up too neatly, but again, it doesn’t last long, and it has some surprisingly clever dialogue that prevents it from being a total bummer. There’s no twist, no storytelling, just a really long middle section in which Shyamalan takes his time (for once) and focuses on facial expressions, feelings, and pretty details.

Don’t get me wrong, After Earth isn’t going into anyone’s Top Films of the 21st Century lists. Or even Top Films of 2013’s Second Quarter. It’s clearly a vehicle for Will Smith to get his son a similarly bangin’ show biz career, and there is absolutely some back-patting in the Smith household about the depth of the father-son metaphor and how it relates to Jaden trying to impress his own dad in real life. And then they try to high five, but it’s uncomfortable because of all of their bejeweled rings, so they just sit down, beaming, and quietly eat their dinner of pearl soup and gold leaf salad.

But who gives a crap about all that. You go, Smiths, have some successes. All I care about is that After Earth has changed the fabric of filmmaking–if just because we all have to adjust our expectations of the director we love to hate.

It’s a phenomenon the world hasn’t experienced since 1999. You’ll want to tell your children where you were on this fateful day.

You’re a stickler for believable science. There’s a “rescue beacon,” a tiny machine that sends what appears to be a huge ring of light THROUGHOUT SPACE and brings paramedics to your dying dad’s side just in time. That’s true M. Night style, but believe me when I tell you those moments are few and far between.