Oblivion: The future is in good hands

As long as Tom Cruise is still out there somewhere, running his little legs off, the world can never truly be lost. Last year’s Rock of Ages really did a number on my subconscious. I started having Tom Cruise dreams—not sexy dreams or anything. Tom would just show up here and there, like it was no big deal that he was a neighbor, a doctor, a friend, whomever. At some point in the past couple of months I gave in and just started watching Cruise movies, searching for whatever it was that the universe was trying to tell me. 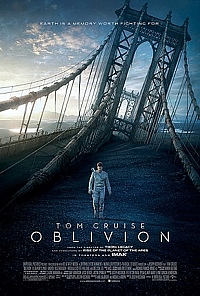 Then I saw Oblivion last night, and I was all like, “Ohhhhhhh!”

The answer, of course, is that Tom Cruise will most likely be the one to save us from an alien attack. Obviously. I don’t know why I didn’t think of that before. He’s little, he’s spry, he works hard, he’s clearly resistant to time’s effects on the body, and he’s an amazingly good liar.

This all works for him in Oblivion, directed by Joseph Kosinski (Tron Legacy). It’s like 2100 or some shit, and Earth is basically uninhabitable due to a Nuclear Space War. Jack Harper (Cruise) and his lady love slash colleague Victoria (Andrea Riseborough, who is so good!) are in charge of monitoring these huge seawater converter things so that humans can have water to drink off in their new digs. You see, everyone from Earth has peaced out to go live on one of Saturn’s moons, via this enormous and extremely sophisticated space station called Tet, which humans built after they completely destroyed their…own…planet………….wait a second.

SOMETHING IS NOT QUITE RIGHT.

Jack’s guard is up from the moment the film begins, but Victoria is super stoked about their pending ascension to Tet and then Titan beyond. He’s haunted by weird dreams that may or may not be memories, while she’s happily OK with the fact that their memories were wiped before their mission began. Everyday she sits in her control tower and communicates with her gal pal Sally (Melissa Leo) on Tet, taking orders for Jack as he repairs droids and avoids the aliens still hanging around in the ruins of the New York Public Library, as everything always does.1

Cruise does his normal thing, which is to be awesome. He seems tired and unsatisfied, while Riseborough’s longing for their promised reward and her wide-eyed love for Jack are totally convincing. I’d even go so far as to say she was the star. Certainly not Olga Kurylenko, who plays Julia, a mysterious-yet-beautiful human Jack rescues from a spaceshipwreck. Their chemistry is supposed to be out of this world, but I felt nothing. Maybe not her fault, though. Her character just does a lot of clutching and gasping and wearing overly fitted jumpsuits. Not a lot of room for breathtaking performances.

But Riseborough! Her unsettlingly huge eyes fill with water and then dry up again at a moment’s notice. She alternates between steely and vulnerable admirably, and I kind of want her to be in every movie.

Seriously. Oblivion’s main problem is not knowing exactly what it wants to be. Jack both creates and stumbles upon so much tension and intrigue, and as a viewer, you’re fully engaged from the start. Then there will be a silly, overlong action scene that will exasperate you to tears while you wait for Things to Be Revealed. And the plot has so many, many holes that could have been sewn up had explosions not taken up so much of the film’s significant screen time.

In the end, Oblivion is admirable in many ways: gripping, moving, intriguing, and surprising. It just wastes too much gas on the unimportant parts and prevents itself from ever getting off the ground.

The future looks pretty awesome (despite all that nuclear war stuff)—astronauts, if not Tom Cruise, are only hired if they’re stunningly beautiful women. And, in 2100, you wake up perfectly coiffed with false eyelashes on, sorting through your entirely beige wardrobe, in a shockingly clean home every single day. It’s comforting, somehow, to see that the future is still exactly as we figured it would be.

(Also, there’s some pretty good filmmaking. Especially at the end.)

Without any exaggeration, I would estimate that all four of the film’s other characters say the name “Jack” approximately 200 times total. Tom Cruise looks a little sad. “Jack?” The spaceship feels like it’s going to crash! “Jack!” You’re waking up from a deep sleep. “…….Jaaack?” You can’t find your colleague. “Jack? JACK??”2