You know Rock of Ages, it’s that colorful, boisterous musical based on the music of 80s hair bands. The one with the trailer that made you shudder hard and proclaim in loud, scornful tones that moviemaking is simply not what it used to be and Tom Cruise has NO business strutting around shirtless on a stage.

I know this is painful to hear, but the truth is…Tom Cruise has plenty of business strutting around shirtless wherever he wants. 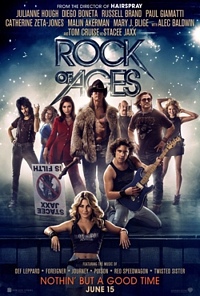 There are plenty of actors who could have been brought on board to play Stacee Jaxx, the fictional rock god of the film’s 1987 Los Angeles. Russell Brand comes to mind, as the character is in the same ballpark as Aldous Snow, but Brand is already booked as Lonny, a goofy lackey at The Bourbon Room. There, he mostly follows around club owner Dennis Dupree (Alec Baldwin) as the two fret about the decline of rock and roll and whether or not they’ll be able to stay in business. Stacee Jaxx, the biggest and most unreliable star in eyeliner and leather pants, is their meal ticket out of the woods.

So that’s one story. There’s another, less exciting one in which boy meets girl and they don’t stop believin’. Their budding romance, crucial misunderstanding, and tearful reunion is beyond predictable, and far too much time is spent fleshing out what doesn’t need to be fleshed. Because, speaking of flesh, there’s more Tom Cruise screen time to be had. As Jaxx, the swaggering, tattooed, alcoholic, raspy-voiced, sorta crazy rocker who’s just past his prime, Cruise just…he just…I don’t even know what he does. That man is a marvel.

I know, we’re supposed to hate him because of the weird thing he did on Oprah’s couch and the whole “postpartum depression is a myth” tomfoolery, but it’s so great to see someone do something really, really well. And what Cruise does is bear hug an acting challenge and turn himself inside out to deliver the goods. Honestly, I wasn’t surprised. Anyone who grew up in the 80s is basically hardwired to view Cruise as A#1 Actor Extraordinaire. And with Rock of Ages, our secret loyalty is rewarded. Cruise plays Stacee Jaxx with subtle and seductive enthusiasm. The rest of the cast is just fine (although the impossibly fresh-faced Julianne Hough and Diego Boneta could have been a little more interesting), and there’s one scene with Baldwin and Brand that is simply genius, but that’s more to director Adam Shankman’s credit than anything else.

Musically, it lives up to the hype as well. Turns out, 80s hair band tunes are cheesy enough to work in this kind of glitzy extravaganza, although watered-down the film is not. There’s plenty of sex–even to the point of awkwardness. But it all factors into the comedy of the moment, and the film doesn’t do things halfway. Funny moments are funnier than anything you’ve seen lately (I promise), and corny moments are camp enough to get by.

There are all sorts of flaws. The film’s women are suspiciously cardboard, and the pervading theme of “only men can be in bands” is distressing. Hough and Boneta tend to drag the pacing down, but the spectacular talents of Baldwin, Brand, Cruise, and Paul Giamatti bolster the crap out of it. If you can walk in accepting that boy-meets-girl is going to be lame-kinda cool-lame, the various subplots under the main arc will reward you a thousandfold.

You’ve experienced one of the following at least five times:

You were born after 1989. I, for one, can’t wait for Singles: The Musical , in which Matt Dillon belts out tunes alongside Chris Cornell. But for now, the 80s rock sensation is what we’re getting all nostalgic over, so embrace wholeheartedly or go home.