Despite having not played in six days, VCU looked good coming out of the locker room as they jumped out to a 17-10 lead. The Hawks looked a step slow after finishing a game less than 24 hours before the tip. It was a perfect scenario for VCU to wear down their opponent en route to an easy win. Then the fouls happened.

Treveon Graham was the first to head to the bench with two fouls. Moments later Juvonte Reddic picked up his second. Forced to play the 4 spot, it wasn’t long until Troy Daniels joined them on the bench with his 2nd foul. 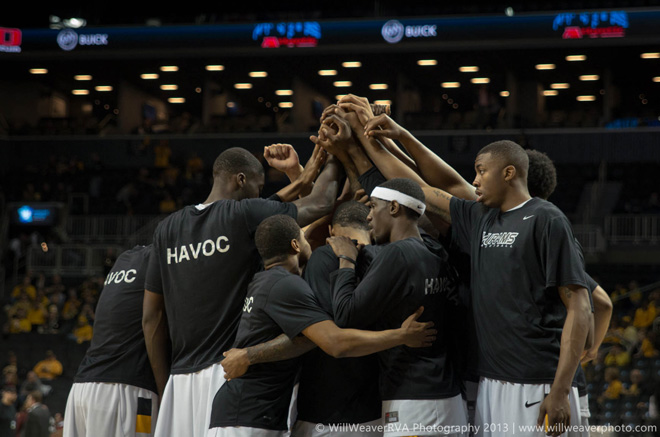 Days removed from losing junior 7-footer DJ Haley, the last thing the Rams wanted was for their depth to be tested. The call was made, and Justin Tuoyo, David Hinton, and Jarred Guest answered. The three players were averaging a combined 11.6mpg in the past five games, but they played 30 minutes on Friday.

Tuoyo played great defense and even stepped out and drained his third 3-pointer of the season. After the game Coach Smart told him, “It’s just one shot, but I don’t know if you noticed, we won by 3.” The moment David Hinton entered the game, Halil Kanacevic entered attack mode. On back to back possessions, Kanacevic posted up, but Hinton was like a brick wall. The second possession ended in a Briante Weber steal turned two points. Recently, Jarred Guest has solidified his role in Coach Smart’s rotation, but he typically plays the four spot alongside of Juvonte Reddic. Despite being seriously “outweighed”, Guest saw minutes at the five spot which will be invaluable moving forward without Haley.

The defense of the young front line was important as the Hawks only scored 6 points in the final 8 minutes and VCU entered halftime with a 33-23 lead. The Rams also got important offense from freshman Melvin Johnson. A Bronx native, Johnson was immediately assertive. He scored six straight points in the first half to expand VCU’s lead from two to eight. His maturation has been invaluable to the Rams over the past month. 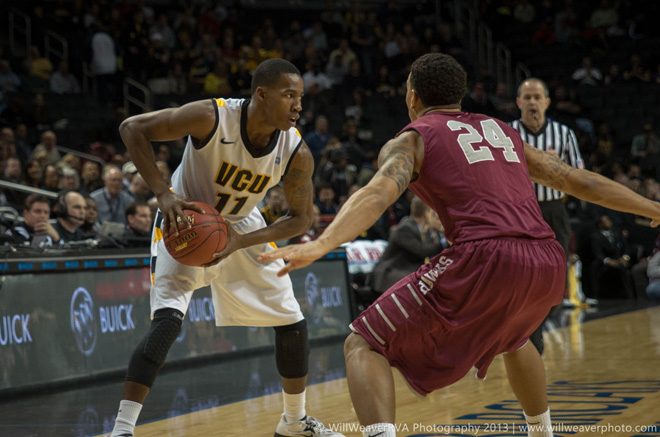 This team’s swagger falls short Joey Rodriguez and Brandon Rozzell, so coach Smart counts on guys like Johnson and Briante Weber, “We always want Melvin to be aggressive whether we are playing in New York or Timbuktu.”

In the second half, Saint Joseph’s made a run behind Langston Galloway and Carl Jones, but VCU responded. The Rams hit three 3-pointers in a row and Troy Daniels finished with four second half 3-pointers as the Rams’ lead ballooned to as many as seventeen points.

With 2:08 remaining, a Troy Daniels layup put VCU up 72-57. The Rams were in position to cruise to their first A-10 tournament victory, but Carl Jones and Langston Galloway had other plans. Jones finished a 3-point play which Galloway followed up with a 3-pointer putting the Hawks within striking distance. Juvonte Reddic responded by hitting 5-6 free throws to put the Rams up 79-71 with 27 seconds remaining.

With nine seconds remaining, Langston Galloway drained another 3-pointer. The Rams immediately inbounded the ball, Darius Theus passed it, and Briante Weber delivered an emphatic dunk. Papa Ndao drained a buzzer beating 3-pointer, but it was too little, too late. The Rams escaped despite Saint Joseph’s scoring 22 points in the final 1:57 and six points in the final 9 seconds.

When questioned why he didn’t follow “conventional wisdom” and slow down the game in the final two minutes, Coach Smart responded, “I don’t know how much you know about us, but we’re not conventional.”

In two games against Saint Joseph’s this season, Darius Theus has 34 points on 14-22 shooting, 16 assists, 5 steals, 1 block, and only 5 turnovers. In the first meeting, he drove to the rim at will. In the rematch, Saint Joseph’s was more deliberate about keeping Theus out of the lane, but he still finished a perfect 5-5 from the field, and he was excellent at finding VCU’s shooters open on the perimeter. Considering Saint Joseph’s momentum, his play to avoid getting fouled while passing the ball to Briante Weber could be the reason VCU walked away with a W. 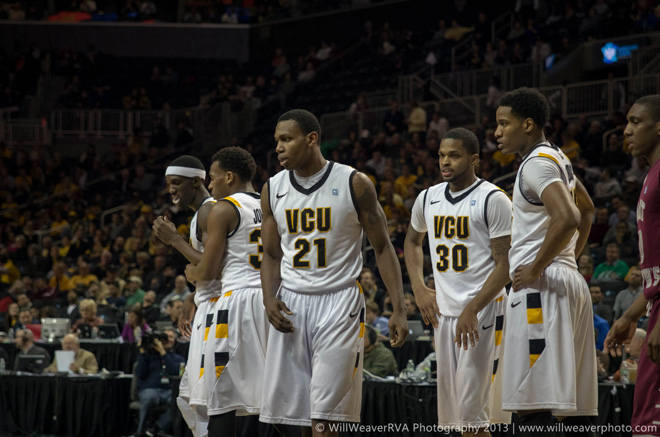