Erie SeaWolves and YOUR DOG at the Diamond this week

On Wednesday night you can bring your dog into The Diamond. No joke. It is going to be a sight to see.

The Erie SeaWolves come to Richmond on a tear and looking to snatch second place but have to first deal with the sharp end of the Flying Squirrels pitching staff.

The Erie SeaWolves (21-16) are holding 3rd place in the Western Division, a game back from the 2nd place Flying Squirrels (22-15)(who are themselves only 1/2 game behind the Altoona Curve). Like the Squirrels, the SeaWolves stumbled to begin the season but have gotten hot: Erie dropped their first 8 but have since gone 21-8. The Flying Squirrels lost 6 of their first 7 but have gone 21-9 after that first week.

The two teams have for the most part played different sets of Eastern League clubs. While the Squirrels were playing the Reading Phillies, Harrisburg Senators, and New Britain Rock Cats, the SeaWolves were trading series with the Binghamton Mets, Trenton Thunder, and Akron Aeros. The only clubs that they have both faced are the Bowie Baysox and the Altoona Curve, with the SeaWolves holding an advantage in both series. The SeaWolves are 5-1 vs Bowie and 7-3 vs Altoona. Richmond is 6-4 vs Bowie and 4-7 vs Altoona.

This series will be a test of Erie’s offense against Richmond’s pitching & defense. Erie has been winning higher scoring games by getting on average almost 5 runs per game, Richmond has been winning by holding their opponents to right at 3 runs per game. The Richmond pitching staff leads the league at 2.83 ERA (the only team under 3.0), with Richmond starter Daryl Maday unbeaten at after 7 starts and holding a league-leading 1.54 ERA. The SeaWolves, on the other hand, lead the league in homeruns and triples, and their leftfielder Wilkin Ramirez is one of 3 players in the Eastern League with 8 homeruns. 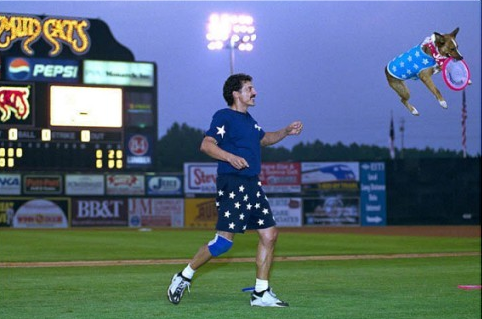 Tuesday May 18 – 7:05PM (HOME)
Maday (6-0,1.54) vs Oliver (3-1,4.28)
Richmond Flying Squirrels vs Erie SeaWolves
“It’s Tribute to the Peanut Night at The Diamond presented by Virginia Peanut Growers Association, Inc.! AND KRAFT Singles Tuesday Night Tickets: Buy 1 Ticket, Get 1 Free from KRAFT Singles with purchase. Bring your package wrapper to a Flying Squirrels Game on Tuesdays for a steal of a deal!”

Wednesday May 19 – 7:05PM (HOME)
Richmond Flying Squirrels vs Erie SeaWolves
The Diamond goes to the dogs on Wednesday for Bark in the Park Night presented by VCA Animal Hospital, Richmond SPCA, and Holiday Barn. Fans are encouraged to bring their dogs out to The Diamond & there will also be a performance from Skyy Dog USA.

Thursday May 20 – 10:35PM (HOME)
Richmond Flying Squirrels vs Erie SeaWolves
“Education Day: All schools are invited out to The Diamond for an educational opportunity involving baseball!”