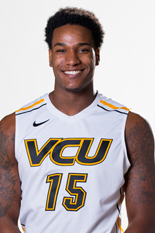 Juvonte Reddic is on pace to finish career top-10 at VCU in scoring, field goals, field goal percentage, free-throws, rebounds, steals, and double-doubles. He has improved every season and he is poised to dominate this year. This summer, Reddic attended the Amar’e Stoudemire Skills Camp and the LeBron James Skills Academy.

Reddic is a serious candidate for A-10 Player of the Year alongside Treveon Graham, Dwayne Evans, and Chaz Williams. This is Reddic’s last opportunity to lead VCU through another March run, but he should be the next VCU great to join the NBA.

In his first three seasons, Reddic has 1,025 points, 601 rebounds, and 113 steals. This season he shot the sixth best shooting percentage in VCU history, and his 17 double-doubles ranks 7th all time at VCU. There is a reason Shaka Smart calls Juvonte Reddic VCU’s most talented player.

Highlight: Reddic had five double-doubles in the course of six games–including fifteen points and seventeen rebounds in an overtime win against Saint Joseph’s.

At the VCU Media Day, Coach Shaka Smart left little doubt that Juvonte Reddic is the Ram’s most talented player. Reddic is an impressive athlete with the size to guard big men but the speed to play full court defense and keep up with the Ram’s transition offense. His 0.80-1 steal-to-turnover ratio would be impressive for a guard, but it is incredible for a forward. Despite his talents and ability to put up big numbers, Reddic has also disappears at times. In May, Reddic had back surgery on a herniated disk, but he appears to be fully recovered and in better health than the end of last season when he only averaged 5.3 PPG and 3.7 RPG in the final three games.

Room for improvement: After improving in almost every statistical category between his first two seasons, Reddic is poised to have a very successful junior season. The departure of Bradford Burgess should give him more shot attempts and the Ram’s improved 3-point shooting should buy him more space to operate in the paint. Averaging 14 PPG and 8 RPG is not out of the question even in the Atlantic 10, but for the Ram’s to win a conference title, Reddic needs to prove he can be counted on in every game.

Key stat: In a season that the Rams struggled to shoot, especially in the half-court offense, Juvonte Reddic led the team shooting .514 from the field.

Reddic’s coming out party was during the 2011 NCAA tournament when he scored 12 points against First Team All-American JaJuan Johnson from Purdue. Reddic is versatile and explosive on both ends of the court. Sometimes he can disappear, but his assertiveness is paramount to VCU’s future success. Juvonte Reddic made the leap and successfully elevated his game during his Sophomore campaign. Even more so than Jamie Skeen or Larry Sanders, Reddic has the perfect combination of size and speed to thrive in Coach Smart’s system.

Highlight: It’s tough to remember a more dominant performance than Juvonte Reddic’s first half against William & Mary in the Siegel Center. At halftime Reddic had 19 points, five rebounds and six steals. Even more surprisingly, Reddic was the only player on either team without a foul, even after 37 minutes of action.