City Council approved the new City Jail with a 7-2 votes in front of a packed audience, including a man in…a prisoner costume?

City Council is in session for the premier fight of the Jones administration. The Mayor is back, as dapper and as unflappable as ever, and he’s brought his troops with him. The entire right side of the auditorium is filled with Sherriff’s Office employees. They are a quiet, well dressed lot and seemingly in a good mood. They look more inclined to celebrate than intimidate. After all, they have a lot at stake in this debate. It can’t be a picnic working at a jail with 1,400 inmates stewing in their own juices. That’s something no one discusses, but on top of being miserable, it’s got to smell real bad in there. I spent one night without air conditioning last week and thought I was going to jump out of my 7th floor window. These guys have got to show up at work each day and deal with difficult people in difficult circumstances. Yeah, a new air conditioned jail is a big deal to them too.

As council members settle in to their big recliners, Council President Kathy Graziano calls the meeting to order, and Sheriff Woody makes an opening statement accompanied by a Power Point presentation. He spoke of difficult working conditions, dedicated employees, and the difficulty of keeping them. Jones administration officials touted the benefits of the winning bid and its price tag: 11.5 million under budget.

Councilman Tyler then led a brief interrogation where he challenged the Minority Business Enterprise (MBE) statistics that put the Tompkins/Ballard bid over the top. From where I sit, he had a point. Minority set asides have always involved a lot of smoke and mirrors. A minority contractor can get credit for millions of dollars of procurement that they only supervise. There are Federal guidelines for this, but lost in the debate is the real purpose which is to funnel work towards minority businesses, contractors, and employees. The impact is often a lot less than meets the eye. After more questioning by Reva Trammell and Marty Jewell the hearing moved on to the public comment portion starting with the nays. 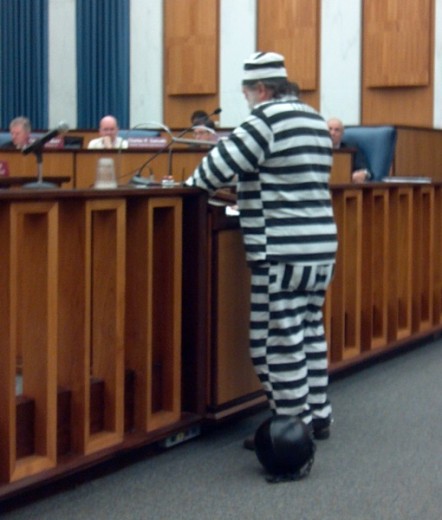 Space doesn’t allow for a detailed rendition of the comments, but the nays definitely had it over the yeas, at least in terms of presentation. The nays spent less time criticizing the winning contract than lamenting the idea of spending millions on a jail instead of schools, jobs and families. One, Charles Hughes, came in costume as an inmate in strips, complete with ball and chain. Chris Dorsey announced that he was running for sheriff and the jail was a scam to bilk millions of dollars from the city. Gandhi and Aristotle were quoted, but my favorite quote came from Audrey Jacovs, “We don’t need edifices, we need services.” About 8 to 10 people spoke against the jail, including one recent inmate.

When it was the yeas turn to speak, a good 25 people lined up for their chance at the microphone (including the same inmate), and more than a few took their full allotted 3 minutes as the hearing passed the two hour mark. The quote of the day came from Reverend Ray Smith who said, “There’s only one other place I know that is hotter than the the city jail.” There was no question about which place he was talking about and it wasn’t my apartment. Mostly people, including a number of volunteers and former residents of the jail, spoke about the need to provide humane treatment to the prisoners and the danger of doing nothing. City Council then proceeded with their own debate. About this time, Mayor Jones simply got up and walked off the floor.

All that could be said, pretty much had been said, but that didn’t stop each councilperson from making a final statement. Marty Jewell gave the most impassioned speech of the evening summing up all his objections, of which there were many. There was a last minute move to delay the final vote till September which was voted down 5 against, 3 for, including surprisingly Charles Samuels, and one abstention (Reva Trammell). Shortly thereafter the city jail was approved 7 – 2 with Marty Jewell and Bruce Tyler voting against. When President Graziano announced the measure had passed, the room exploded with applause. They Mayor got his victory, the jailers got their jail and the citizens get a $116 million dollar facility they hope they will never see.