A peculiar tone set in at last night’s City Council meaning, but it did not derail the passing of Charles Samuels’s new noise ordinance. Also an impassioned plea from an otherwise subdued Mayor Jones continued the debate on the new City Jail.

I thought I was ready to sub as reporter for last night’s city council meeting. I’ve been to quite a few and participated in one form or another, so I thought I knew the routine, but tonight they switched it up on me. Instead of the usual sequence of wading through endless announcements and awards, the council made quick work of the consent agenda and skipped through the rest of the time consuming business of district reports, smoke detector hawking, and citizen comments and jumped direct into the new city jail debate. They were 10 minutes into the process before I realize what they’d done. It’s not that I wasn’t listening, but I wasn’t taking notes yet. OK, so the dog ate my homework, but here’s what happened.

Earlier today Mayor Jones held a press conference with Sheriff Woody laying down his line in the sand in support of a new jail. Basically he wasn’t going to take a “No” lying down. He released a lengthy statement that began this way:

“This is not a new issue for our City. We’ve been struggling with the need for a new jail for more than a decade. When I started this process to get a new jail built for the City of Richmond, it wasn’t a popular undertaking. A new jail is not a stylish issue. It’s a matter that comes with built-in objections. It’s not a feel-good issue at all. And, it’s not the issue of my administration that I want to have to fight for, but it is the issue that I must fight for because change in this area is so important to the overall future of our city.”

And ended this way:

“Our recommendation is the right firm, the right design, the right price, and the right timeline. I’m urging City Council to support the recommendation tonight and let’s do what’s right for the City. If the personal agendas that are working against our progress are allowed to derail this effort, it will be a sad day for the City of Richmond and one that I hope won’t easily be forgotten.”

For our mild-mannered mayor, these constitute fightin’ words, and there was a place at the table for him this evening in what promised to be a lively show. As the saying goes, “Promises were meant to be broken.” Except for a little bit of peevishness from the Bruce Tyler faction (i.e. Tyler, E. Martin Jewell and Reva M. Trammell, pictured above, the latter two council members have been snubbed in key council roles and have coalesced with Tyler to increase their political leverage) there was a remarkable lack of passion on all sides. Maybe this is because before they started, they agreed to continue the public hearing until Thursday where they get to do this all over again. Maybe everyone was just keeping their powder dry and saving their best shots for the final act. There were remarkably few speakers, and before they wrapped it up, a straw poll revealed most of the audience was in favor of the Mayor’s proposal. 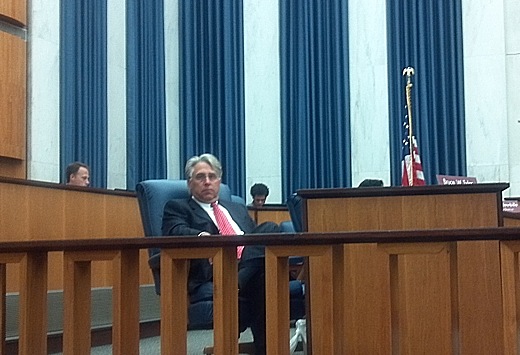 The second major item on the agenda was Charles Samuels’s noise ordinance. Considering all the hyperbole that has surrounded this issue, again you would have expect more of the same here tonight. There wasn’t. This could have easily been left on the consent agenda where it started. I think they pealed it off as much to shine a spotlight on Mr. Samuels as to give the public one last chance to comment on this. Public comment consisted of a half a dozen “thank you’s” from Fan and Shockoe Bottom residents, and one half-hearted comment on the other side that didn’t exactly oppose the ordinance. After Samuels’s summary, he collected congratulations from the rest of the council after which the ordinance was passed unanimously.

One other item of note was item seven on the consent agenda:

Ord. No. 2011-141 (Patron: Mayor Jones – By Request) – To authorize the special use of the property known as 7 North 2nd Street for the purpose of authorizing a hostel.

As I said earlier, the consent agenda passed so quickly, I don’t think the small crowd from the Richmond Hostel Project even realized they’d cleared the final hurdle standing in the way of their purchase of the former Otis Elevator building. I’m sorry that they weren’t at least acknowledged, but I’m sure they are more than happy to get their permit approved and move on towards bringing something new to downtown.

The good news for me was when I finally got home an hour later, Council was still dealing with personal announcements, Reva Trammel was still hawking smoke alarms and I got an extra hour added to my life. Everybody won.