It’s been suggested that I report on the informal sessions that precede the Formal Session and I agree, it’s a good idea. Thanks to Christopher Columbus I have the day off and what better way to spend it than at an afternoon session of City Council. It’s been suggested that I report on the informal sessions that precede the Formal Session and I agree, it’s a good idea. Frequently, this is where the guts of legislating takes place: deals are struck, papers are continued. A pesky day job usually gets in the way, but thanks to Christopher Columbus I have the day off and what better way to spend it than at an afternoon session of City Council. Today’s agenda makes it even more auspicious. There are no appointments, no awards, and no items on the Regular Agenda, so if anything is going to happen, it’s going to happen here.

First up is a presentation by Mark Flynn–of the Virginia Municipal League (VML), an advocacy group of municipalities throughout the state. Their concern is an amendment to the state constitution making it more difficult for cities to condemn property via eminent domain for the purpose of economic development. Virginia already has restrictions written into state law, but ever since the U.S. Supreme Court ruled that City of New London, Connecticut could do just that, property rights groups across the nation have been lobbying for laws and amendments banning the process. A Republican legislature and governor have done just that in an amendment that goes before the voters next month (PDF). Flynn and others are concerned this will hamstring local governments’ ability to deal with things like blight abatement, discourage development, and cost taxpayers millions of dollars. Critics feel the amendment is poorly written and once part of the state constitution will be difficult to repeal. With little public opposition, it is expected to pass easily.

The next presentation is an early look at the Council’s legislative agenda in the legislature. There’s not much too it yet, but aside from the usual suspects like education funding and sewer projects, are the taxing internet sales from companies like Amazon and the implementation of the Affordable Care Act. The draft document is full of revisions and stricken passages. I’ll update this when there’s more to report.

Item 1 on the Consent Agenda is a paper by Charles Samuels that has long been in the works. After the debacle over the funding of the City Jail, Council wants to appoint a member of the committee that reviews Public-Private Educational Facilities and Infrastructure Act (PPEA) projects. Here’s the description from Virginia.gov:

The Public-Private Education and Infrastructure Act of 2002 (PPEA) was designed to bring private sector expertise to bear on public projects – saving time and money. 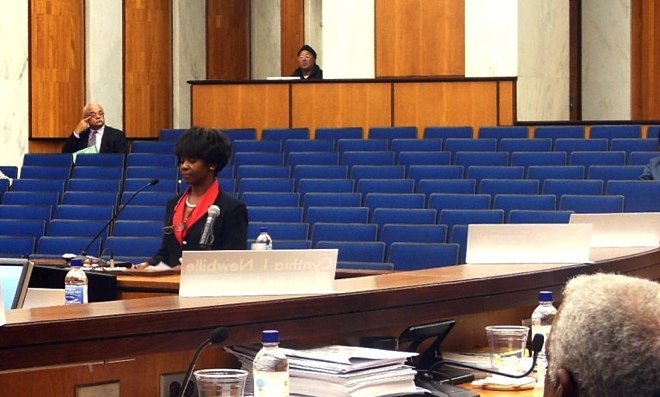 In English that means “private entities” can propose projects and work out the details with the City Administration before presenting them to Council. In the case of the city jail, the Mayor’s office worked on the project for two years behind the scenes, then dropped it in front of City County with only months to review, amend, and pass. You can look back a few issues to see how much fun and embarrassing that was. Ever since, Council has wanted a seat at the table. The Administration on the other hand objects and Cheryl Wright, Director of Procurement, is here to say that according to “best practices” there should be a firewall between the legislative body and the procurement process and that she will go the extra mile to insure that Council is better informed in the future. Her surprisingly passionate plea goes unheeded. Samuels refuses to pull his paper and it stays on the Consent Agenda.

The Council then sifts through the rest of the Consent Agenda, continuing about half of them. Remaining items include a handful of Special Use Permits for residential properties on Cary Street and Monument Avenue, $1.5 million for the Richmond Public School for American With Disabilities Act (ADA) compliance projects, and $785,000 to construct a roundabout on Brookland Park Boulevard.

An so the Informal Session comes to a an uneventful end, and I’m home in time for dinner. A brief look at the broadcast shows Marty Jewell hauling CAO Byron Marshall over the coals with his usual flair for the dramatic. Reva Trammell is also pleading for action on behalf of her elderly constituents for everything from sidewalks to street lights to weed cutting. This is Reva’s stock-in-trade. She’s a pitbull on behalf of her constituents and never shy about pressing her case. She can leave hapless department heads speechless. Mr. Marshall, to his credit, never loses his temper and promises to attend to a raft of complaints.

One more meeting before the election. There bound to be a few surprises between now and then. I’ll keep you updated.