City Council: Nobody left here but us ‘Chickunz’

Last night’s City Council meeting began as a standing-room-only event. By the end of the evening, however, only a few remained. Children were honored, budgets were discussed, and chicken owners rallied behind their cause. You know, just your typical council meeting. It’s crunch time at City Hall. According to state law, the school budget has to be approved by May 15th. On top of that, the City Council must submit a city budget by May 31st. If they don’t, the Mayor’s budget will go into effect. So, come hell or high water, they are going to pass a budget tonight. Of course not without a bit of drama and grandstanding.

Tonight promises to be long and grinding. It’s standing room only. I don’t remember a crowd this big, at least since I’ve been covering these stories. A crowd this big can mean only two things: lots and lots of citizen input and a ready-made crowd for ambitious Council people.

Many of the regulars are here including Donald Corker, Donald Hatcher, and a contingent from Occupy Richmond. Even Silver Persinger is back after another long absence. He seems more refreshed and relaxed than ever.

The theme tonight is kids, grade schoolers, middle schoolers, and high schoolers. Part 1 features the students themselves, being recognized for excellence and civic participation. As usual this is the fun, uplifting part of the meeting. Part 2 will be less fun when the showdown over the Richmond Public School (RPS) budget begins. Meanwhile, the Chickunz lobby is here in force with five speakers signed up for Part 3, the Citizen Comment period. They are in for a long wait.

Nearly all of the best and brightest of the RPS are here to be recognized. There are too many names to mention—81 in all—but they are honored individually and by category.

Also receiving an award tonight is the retiring founder and director of Boaz and Ruth, a job service agency for former city jail inmates, Martha Rollins. She is highly praised and very gracious in accepting her award. 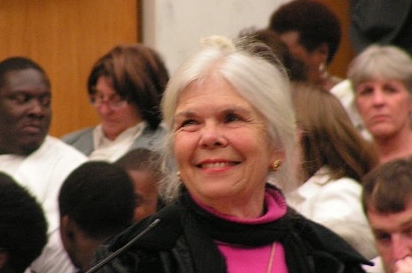 This portion is entirely made up of budget items including 18 amendments to the Mayor’s budget that were hashed out over the last two months.

First up is a $1.2 million grant to the RPS foundation, apparently the brain child of Councilman Hilbert who is conspicuously absent tonight. Matching funds from the community could double this amount. This is money dispensed by the foundation, not the school board and it passes after brief discussion.

Before the council can take up the big items, the Capital and the General Fund budget, Councilman Bruce Tyler makes a move to increase school funding another $3 million. This is to be paid for with an additional 1% across the board budget cut (Mayor Jones budget already includes a 1% cut on behalf of the RPS). This is a diversion. Tyler already knows he will lose this vote. It will play to a supportive crowd, lose and delay the entire meeting by a full hour. Marty Jewell leads the charge for this motion with oratory lasting 15 minutes. Tyler adds his own more sober comments. Reva Trammel point out that this will cost the police and fire departments hundreds of thousands of dollars. It turns out 1% is a lot of money. The rest of council wants to dispense with this and get on with business, but each must defend their position. Council then votes down Tyler’s amendment 5 – 3, with Trammel voting with the minority. 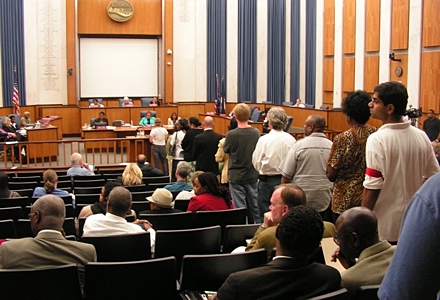 Now on to the general fund budget and there is a big crowd eager to condemn, cajole, and plead for more money for the RPS, whose request for a $24 million increase in city funding was dead on arrival. The mayor and his budget commission scraped up about $6 million and the council has added nearly $3 million. The School Board, however, is still $15 million short of its goal and threaten layoffs and salary cuts. The Mayor and Council, on the other hand, are seeking budget reforms, outsourcing, and less drastic cutbacks. There was passionate pleading for full funding and angry demands and accusations from activists and threats of revenge at the polls. Some 25 speakers and 90 minutes later, the matter went back to Council where each pledged their dedication to education and the constraints of a tight budget in hard times. After the formalities the budget passed on a 7 – 1 vote. Only Reva Trammell voted against.

The Capital Improvement Budget then passes with very little discussion.

With the business portion over, the long suffering citizen commenters finally get their turn before an empty chamber, but a vast TV audience of at least one (including myself) having surrendered at 8:30 to watch the rest at home. It is nearly 11:00pm, but all this waiting has not been in vain. The Chickunz lobby light-hearted campaign for urban chicken has finally won them a couple of friends on City Council. Charles Samuels has promised a resolution to the Mayor and Marty Jewell jumped on board as a co-sponsor. Fresh eggs may be coming soon to a backyard near you.

Finally, Silver Persinger steps up for what sounded like his farewell address, with a call for citizens to run for office, and a primer on how to do it. He also urged citizens to not only attend regular Council meetings, but sub-committee meetings where much of the real work gets done. After carrying the torch for many years he appears to be moving on. While perceived as a pest from time to time, he was invariably well-informed and well-spoken, which is exceptional for a self-described Council gadfly.

That’s about it for this meeting. Two papers involving the Landmark Theater were continued to the next session on the 28th. I’ll be there and I’ll see you here the next day.