Over 40 years ago, Martha Rollins moved to Richmond. In her time here, she has fought against racism, recidivism, and misogyny. Now, approaching her 70th birthday, she’s making plans to pass the baton. Martha Rollins points out the window to show me where murders took place many years ago. She remembers six, each one within a two-block radius of where we stand. She tells me this macabre history at Fire House 15 while we chat over breakfast.

“It’s taken years to overcome that,” says Rollins, 69. The area is the Meadowbridge Corridor (PDF) in the city’s Northside. Rollins said that the area saw a 61% reduction in crime by 2009. It’s difficult to give one sole individual credit for such a dramatic reduction. If you were so inclined, however, Martha Rollins would top your list.

Rollins, for whom it seems impossible to go ten seconds without offering an ebullient smile, is founder and CEO for Boaz & Ruth, a local faith-based organization that almost single-handedly fostered Meadowbridge’s redevelopment. According to census figures, of the seven city blocks with the highest number of returning prisoners, six are in the Meadowbridge Corridor. Boaz & Ruth wants to not only keep people away from incarceration, but give their lives purpose and meaning. “Changing people’s hearts and minds,” says Rollins. It’s been her stock and trade for most of her life. 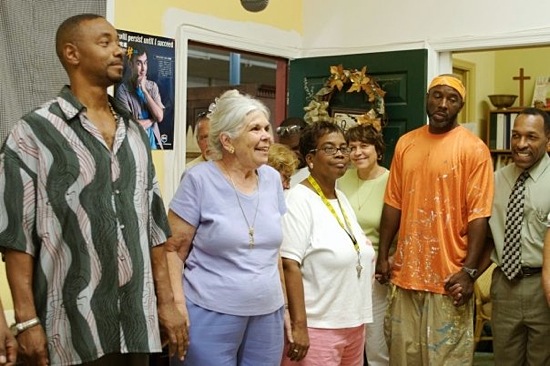 Rollins grew up in Martinsville, Virginia. In 1963, while studying at Duke University, she participated in a faith-based opportunity working with Henry Street Settlement in New York City’s Lower East Side. She lived on the “peace block” amidst gang territories while engaging with children from low-income families. The goal then—as it remains for her now—is “to provide presence in a place of conflict.” She graduated from Duke in 1968, the same year that the university desegregated. She recalls being inspired by the then recent release of Betty Friedan’s The Feminine Mystique. It was, she says, a “very exciting time.”

She and her husband moved to Richmond in 1968, settling in a Byrd Park home. The neighborhood had recently become “broken” (the parlance used at the time) because black families were moving in while white families were moving out. They were the “first white family to move in” after that. The perception that black residents were unfit for homeownership unsettled Rollins and her husband. She helped form a civic association to counter it, and her husband brought litigation against a local newspaper that segregated their housing classifieds based on the racial makeup of the area in which the purchasable property stood.

To combat racism in her Byrd Park neighborhood, she went on to help create the still on-going Arts in the Park event. In 1972, despite contrary cultural norms for women, she opened an antique shop in Carytown. It was here that the “genesis” for her social work came about. She recalled that young VCU students found her and her shop particularly hospitable. It was there that wayward youth watched Rollins welcome discarded objects in disrepair, fix them, and sell them to customers. The antique shop embodied a metaphor: “To create beauty out of brokenness,” says Rollins.

Her attention turned away from Carytown in late 2001 to the Meadowbridge Corridor. Back then, she says, “80% of buildings were boarded up.” She points out that same window during our breakfast: this one…that one…over there, she says. “It was a mess.”

In 2002, she founded Boaz & Ruth. Its aim is three-fold: rebuild the lives of men and women, the community, and connections that the Meadowbridge Corridor has with the rest of the city. The organization offers a one-year program to provide individuals with relational and emotional competency, leadership abilities, and technical skills. Individuals who complete the program graduate in a ceremony held at the Police Academy. Former Gov. Mark Warner even attended one event. 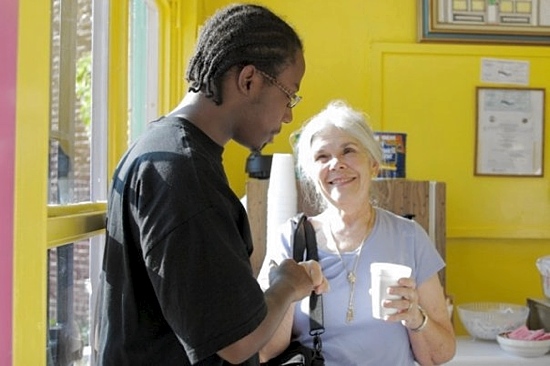 To help fund this extraordinary endeavor, Boaz & Ruth has several businesses that both employ local residents and generate money for the non-profit. There is the restaurant (where the Commonwealth’s Attorney General, Ken Cuccinelli, dined the previous evening), Mountain Movers residential and business moving service, and Parable furniture restoration. There is also Sunny Days thrift clothing.

One of the women in charge of managing the store is a woman named Ruth (the “real” Ruth, said Rollins). “We’ve grown so much beyond murder,” says Ruth when we chat in the Sunny Days thrift store. Ruth was the first individual to join the Boaz & Ruth program who was never incarcerated. The strong suicidal tendencies that Ruth had lived with persuaded Rollins to admit her into the program. As a result, Ruth said her life is infinitely better. “She was so much to us,” says Ruth about Rollins. “A part of me is afraid to let her go.” There are others that feel the same way.

Later this year, Rollins will step down from her chaired position in Boaz & Ruth’s board of directors. Talk of transitioning began back in August 2002 when she attended a “transition guide” program in Baltimore for organization founders. “We’ve had a [transition] plan since Summer 2007,” she said.

Rollins will turn 70 next March and said that there will be a large party “not to celebrate me but to celebrate the neighborhood.” While she still finds lasting reward and fulfillment in her work, she does not want Boaz & Ruth to falter or dissolve because of a future illness or her eventual death. She wants it to endure.

When asked how the city can take part in the continual redevelopment of people and property along the Meadowbridge Corridor, Rollins asks that people only “change their shopping patterns…just a little.” She says this with a smile. Increasing patronage to local businesses, she says—be them Boaz & Ruth ventures or otherwise—will “help move the economic needle.” A woman who has spent her life combating racism, recidivism, and who helped redefine the social role of women, Rollins hopes that people embrace the cultural eclecticism of the city even after she steps down. “Mix the world up a little more,” she says, smiling all the while.

It was originally reported that Martha Rollins was the current chair of Boaz & Ruth’s board of directors. That position is held by Carlos Brown. Ms. Rollins is the founder and current CEO of the organization.
photos courtesy of Nathan Friedkin