City Council: Hail to the Redskins

Election fever is in the air, presidential debates and Dancing With the Stars are stealing their thunder, but I’m here at City Hall to make sure the public is informed. Election fever is in the air, presidential debates and Dancing With the Stars are stealing their thunder, but I’m here at City Hall to make sure the public is informed.

Kathy Graziano opens business with the announcement that the Redskins training camp will be built on State land behind the DMV. I half expected the Mayor to do the honors, but he’s busy fundraising. It’s a cheerful way to start the meeting and received a smattering of applause from her fellow Councilmembers and the sparse gallery. It threatens to be a long meeting with 24 items on the Consent Agenda, six appointments, six items on the regular agenda, and a veritable who’s who of Council gadflies on the speaker’s list. As usual, we open with a prayer and pledge of allegiance, then start hacking away at tonight’s agenda. When they’re done there are only 15 items left on the Consent Agenda, three on the Regular, and six new members are added to the Affordable Housing Trust Fund Advisory Board.

The speakers will wrap up the show.

The Regular Agenda: Of the original six items, one survives. Two have been added from the Consent Agenda, one to move School Board storage facilities from the Boulevard to Hermitage Road, another to relocate School Board facilities from the Boulevard to Commerce Road, and a related item on the Regular Agenda for the same purpose. There is almost no public comment and after the Administration handles few of whys and wherefores the agenda passes unanimously. We’re halfway through the show and it’s not even 7:00. A promising start.

The Consent Agenda promises more or less of the same, but there are a few items on note.

There’s really not much to say about these and the others, but that doesn’t stop Marty Jewell from making extended comments throughout. Reva Trammell asks her usual “dumb” questions, appreciated by me, because they always shed a little more light on the what and the why fors of these things, but there’s no real opposition to any of these tonight. The clerk calls the roll and all items pass unanimously.

First up, Chris Dorsey, who most recently had his mike cut by President Graziano. Chris hits his usual high points, calling City Council a treasonous entity controlled by the Federal Reserve Bank, the CIA, Ben Bernanke, and the United Nations. The people will be back one day to arrest them all.

An old hand, Bishop West steps up to speak on behalf of children on the Southside (whom he has brought with him) and the lack of recreational facilities. Marty Jewell sees an opening and gives another 10 minute campaign speech. The bylaws give 3three minutes to citizens here and no time for council replies.

Former Councilwoman L. Shirley Harvey is a no show.

The older I get the worse the city gets. All kinds of mess, crime so bad you need a baseball bat to walk the streets. Sidewalks are dirty, streets are dirty, it’s sad, People cussing and carry on. It hasn’t gotten any better in 72 years. Somethin’s gotta be done.

Oddly enough I agree him.

The civilians have their say, then Teddy Parham gets up to put an exclamation point on the end of the evening. It doesn’t go well. Parham starts off with a campaign speech, which Graziano tries to stifle to no avail. Next she starts accusing specific councilmembers with various crimes, another no-no the President fails to squelch. Her best line is, “You eat real good, you need to start bringing your own meals.” Before she’s done, Graziano cuts her mike and calls a 5 minute recess while Teddy is eventually escorted from the chamber. 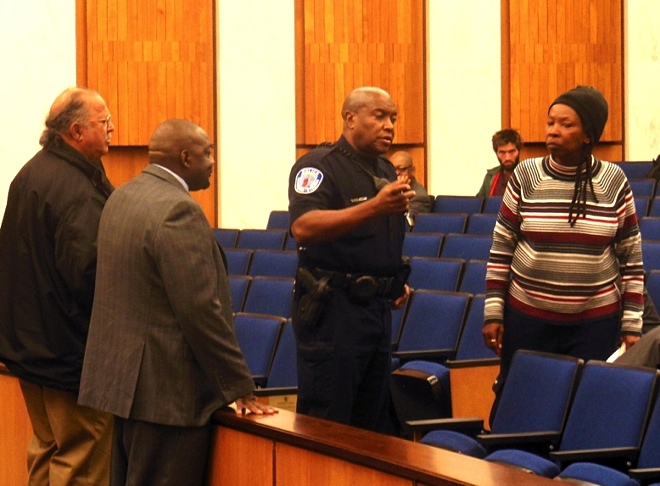 Time for announcements and a quick end to the evening. Not so fast, Marty Jewell has another speech to make, but everyone else is brief.

This is the last session before the election. Next time we meet there may be some new faces or it might be a clean sweep for the incumbents. There are two competitive races, the 2nd (Samuels vs. Diradour) and the 5th (Jewell, Shewmaker and Agelasto). Diradour has raised a lot of (his own) money and has been putting on a full court press on social media. Samuels has received several key endorsements recently, including the Richmond City Democratic Committee and the Richmond Crusade for Voters. In the 5th Agelasto is leading in fundraising and also received the endorsement of the Crusade. Hence the long speeches by Jewell. Jon Baliles is tackling Bruce Tyler in the 1st District. Jon comes with a high profile name (his father was Governor) and a celebrity endorsement from former Senator John Warner, but I don’t think either will count for much in this race. I haven’t seen Baliles put a dent in Tyler’s armor yet.

One last note, Silver Persinger has decided to give the Mayor a run for his money with his own dough. Mayor Jones is sitting on almost $200,000. His opponent, Mike Ryan, has $325. I expect these numbers will reflect the election results. Still get out and vote for someone. It will make you feel good.