Light agenda, but City Council dealt with at least one important item on Monday: the firing of City Clerk Alvin Anderson. Before we begin, I want to follow up on an item from the last Council meeting, the “Vinyl Window War on Monument Ave.” After two hours of heated discussion Council had sent the dispute back to Commission on Architectural Review (CAR) to try to work out a compromise with the homeowner. Nobody seemed pleased or optimistic about the prospect. At the time CAR seemed in no mood to compromise, but facing a very tight deadline and some heavy political pressure, CAR agreed to a 75-day extension to try to work out a deal. I predict they are going to split the baby, allowing the homeowner to keep some of his less visible windows while replacing the most visible ones facing Monument Avenue. If the homeowner disagrees they will all be back here in a couple months.

Light agenda, but at least one important item to deal with tonight. Rumors have been swirling around City Clerk Alvin Anderson recently. A few weeks ago Council President Samuels publicly criticized him after an open government group pointed out that meeting notes from an informal Council were inaccurate. Samuels ordered them to be corrected and curtly stated that this should have never happened and “wouldn’t happen again.” Bob Zullo reported in Monday’s RTD, that Council was trying to avoid firing him outright firing, but by the time tonight’s meeting began there were two expedited papers on the agenda: one to terminate him and another to appoint assistant City Clerk Jean Capel as a temporary replacement. Before the meeting was complete, both of these papers passed unanimously with very little comment.

As a personnel matter you’re unlikely to see any further comment, but the general opinion seemed to be he wasn’t able to handle the job. For those of us who have watched him from the start, he never seemed fully comfortable with it, often stumbling over basic procedure. The City Clerk’s office is a demanding place responsible for handling much of the business of City Council–their job is to stay out of the news. I’m hoping this is a good move for all concerned. Mr. Anderson had held the position since last June.

Here’s how the rest of the meeting went down.

Appointments/Reappointments: There were 18 appointments to various boards and commissions to be approved. These range from Affordable Housing to Lewis Ginter Botanical Gardens to the Richmond Behavioral Health Authority. New appointments have to attend to be approved, and they do count heads. After a couple of tries everybody was accounted for and sent off to the City Clerk’s office to be sworn in.

Awards and Presentations: There were two awards this evening. President Samuels had the honor of presenting an award to his former mediation coach, Carol McCue in honor of Richmond Mediation Month. Ms. McCue is in charge of the Dispute Resolution Office and the Richmond Juvenile Court.

Jon Baliles got to honor one of his neighbors, Mrs. Bertha Burke, by renaming the alley behind her house, “Bertha’s Country Lane.” Mrs. Burke has been steadily tending the alley for 50 years planting roses bushes and other flowers. She received the award along with her husband stating she “just liked to play in the dirt.” 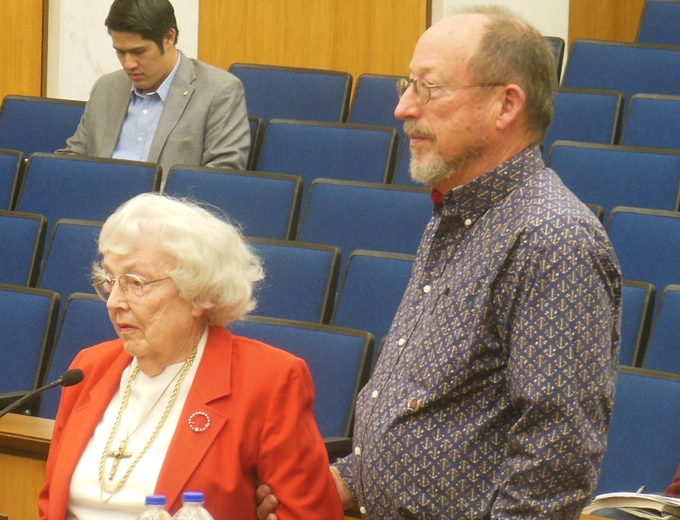 Mrs. Bertha Burke, and her son

The One Voice Chorus was honored at an earlier meeting. This is a multiracial group dedicated to building community through music. They have performed throughout Richmond for 11 years. Anyone willing to devote the time to rehearse can join, and they are open to everyone.

Citizen Comment: Only one speaker tonight. Delores Gordon has been battling to get a hole left in front of her house by a City contractor in October 2008 repaired. She’s made “countless” citizen requests, been told the work has been scheduled, but five years later, the hole is still there. Councilwoman Trammell waved an inch thick folder of papers, chastising the City for forcing senior citizens to come down to City Hall to plead for justice. She was referred to the ever present Administration representative in the back of the chamber. I’ll try to get a follow up on her if I can.

The Regular Agenda: All but one item on the Regular Agenda have been continued to a later meeting. The remaining item, the first of several urban chicken ordinances, has been moved to the Consent Agenda.

The Consent Agenda: Along with several other housekeeping items, a chicken ordinance is finally coming to a vote. Specifically it is to create a new fee for those wishing to raise chickens in the City. “Chickunz” advocate Valerie West expressed surprise that the ordinance was coming to the floor tonight. She had 40 Facebook volunteers signed up to come to the big vote expected at a later meeting. President Samuels reassured her that this vote, perhaps the final one, would take place on April 8th, and it goes before the Planning Commission meeting on April 1st.

The meeting ended quickly and on a positive note. There were no more stumbles from the City Clerk’s office.