So far this year it’s been very quiet, but there are storm clouds on the horizon–and last night’s storms were about windows. So far this year it’s been very quiet, but there are storm clouds on the horizon. The new mix of Council has still been feeling its way–a sort of the calm before the storm. Well tonight’s storms were about windows, houses with them and buildings without them. I’ve been wishing for some kind of controversy to liven things up! Let’s start with the biggest storm.

First up is President Samuels’s resolution to reverse a Commission on Architectural Review (CAR) ruling on vinyl replacement storm windows at 2916 Monument Avenue. If you don’t think that is a big deal then think again. That stretch of Monument Avenue is in an Old and Historic District (OHD) which places severe restrictions on exterior modifications. Anything that alters a home’s historic nature or appearance must be approved by CAR subject to appeal to City Council.

Homeowners in these districts are of two minds. Many, if not most, support these restrictions. They’ve had to work with CAR over the years and insist that others do too. Other homeowners seek some reasonable accommodations to the high cost of maintaining older homes. Tonight’s battle took on elements of a courtroom drama with former Council President Bill Pantele acting as the homeowner’s attorney, Catherine Easterling of CAR as prosecutor, and Charles Samuels as judge. City Attorney Alan Jackson was often consulted for legal opinions and former Councilman Bruce Tyler showed up to speak on behalf of CAR. 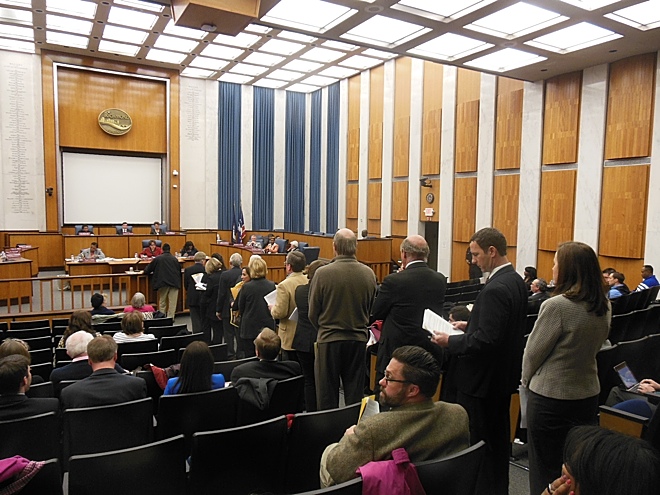 The historic preservation crowd turned out in force to support the CAR decision. A good 20 lined up to speak against the reversal. Here’s a sampling:

Only a few supported the move to reverse CAR including Silver Persinger, a Fan homeowner, and Bill Pantele. Pantele stated that the same windows that the homeowner installed are being used throughout the OHD, including some approved by CAR, and that his clients’ original windows were beyond repair and would cost $47,000 to replace using historic materials. The vinyl windows being used were of high quality and virtually indistinguishable from historic originals.

From there forward, Easterling and Pantele were cross examined by Council. After 30 minutes of questioning, several members, including Agelasto and Trammell, began pushing to send the issue back to CAR to work out a compromise. After considerable confusion, the CAR members present agreed to consider extending the March 4th deadline at a meeting previously scheduled for this afternoon. Easterling was unsure if CAR even had the legal right to discuss the issue since it has not been advertised. If the homeowner and CAR cannot come to an agreement, the issue will have to be voted on during a special meeting of Council on March 4th. So went the first two hours of tonight’s meeting.

The second window war was over a Planning Commission rejection of “windowless” apartment units in a proposed multifamily conversion project at 1815 and 1817 East Franklin Street, which all boiled down to the definition of a window. The attorney for the developer disputed that these were windowless apartments since there were 75 sq ft of dormer/skylight windows in the ceiling that not only let in light, but could be opened for ventilation. Since the windows were not standard windows on the vertical walls, the Planning Commission said they did not meet their recently adopted guidelines. The attorney then pointed out that windows on the vertical walls would only open up onto another brick wall, letting in no light or air. Parker Agelasto, in what President Samuels called the “CAR” option, sought one more time to send this back for remediation. Being no real public opposition to this project , the motion went to a vote where it passed easily.

I did manage to catch a few of the speakers in the Citizen Comment period. Marian Agnew marveled at the care and attention Council gave to seemingly small matters like windows, but could race through a deal as controversial and questionable as the Redskins training camp. As a veteran of the Northern Virginia property wars she expressed fear that once high speed rail reaches Richmond, every inch of public space will be taken over for development. As such she has asked the Commonwealth Attorney to convene a grand jury to investigate it.

Next up, a pair of grieving parents, Janice and Mac McGarity were seeking to bring some meaning to their son’s death. Reid McGarity, not realizing a gap between the spans, fell to his death last November after jumping over a lane divider on the Lee Bridge. Since, they have learned of other similar tragedies in Richmond and around the country and have dedicated themselves to preventing another one. A City traffic engineer has proposed a solution, and Council seems genuinely to want to help them. As they left they were directed to the Administration representative always in attendance.

At this writing (10:30 PM) they were still discussing Samuel’s proposed chicken ordinance. Three more “Chickunz” advocates waited patiently to again ask Council to support this first of three steps to legalize ownership of up to four egg laying hens by City residents–more on that here.