Maat Free selects the five places she thinks are carving out their own place in Richmond’s culinary history, and they aren’t the places you’re always hearing about. Peace! This week on the #untoldrva 5 Things: New Culinary Classics Edition, let’s hold space for some incredible edibles. Have you ever been randomly noshing on one thing or another and suddenly you’re gripped by the fear of it not being on the menu for the rest of your life?

That’s the drop for this latest edition of the #untoldrva 5 Things column. We’re not in timeline format this week so now the whole piece can celebrate those five relatively new and unforgettable RVA dishes whose succulence must be adored like divine ambrosia of the River City gods. Get into it.

This dish is something people actually cry over, drive through red lights for, lament about on Mondays when the restaurant is closed. I’ve been eating Asian Street Food here since before they even had carryout boxes for their takeout. My first visit was on opening day, April Fools 2014. From then on, everyone knows that Maat Free thinks Foo Dog is the sho nuff joint. 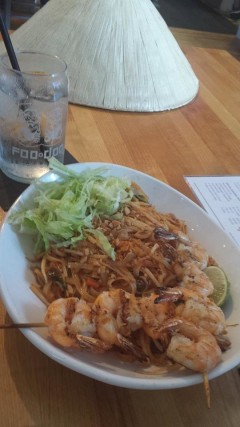 Every time I post a picture of this pad thai on social media, people swoon. I confidently declare that there is no RVA food so completely delicious and spectacular as the shrimp pad thai at Foo Dog on Main Street. What, you ask, makes it a culinary classic? So many things! Coarsely chopped cashews, delicate noodles, firm, juicy shrimp, my beloved cilantro, and basically the way all its flavors are married together just so. Head on over there and try it for yourself. Then count how many times you say “Oh my God” between mouthfuls of savory delight. Don’t hesitate to squeeze your little lime wedge over the top. That’s the critical element that awakens all the dormant beauty of this dish. For the next level perfection, reach over for that burgundy bottle and bless your buds with a light drizzle of Kim Kim sauce. Perfection. Please Foo Dog, don’t ever go away. From day one, you’ve been amazing. I’d marry that pad thai. I’d say I DO.

I can’t ignore how much of a major impact this next place has had on everyone I know. They rave about this place. Really, they do. I made it out there the other day: PACKED. There’s plenty of parking but all the spaces were full. The tables were full. The line was out the door. People were leaving with multiple boxes and bags in their hands. The customers were among the most diverse I have ever seen in Richmond, all sitting together.

I remember when Chicken Fiesta took over the Cameron’s Seafood spot last year. I can’t front, I was kind of heated because that used to be my favorite fish market. It took a while to get up my gumption to try them out, but honey let me tell you right now. DO NOT WAIT. Go see for yourself what they’re doing back in that brick oven. You will do your happy dance over that salmon, no word of a lie. And then there’s the sweet fried plantains and have mercy, those yucca fries bring tears. You really need to go up there. It’s not a joke or a game. People get serious about eating at those long tables. Ain’t no half-stepping. It’s a head down fork in perpetual motion kind of thing. Folks get it in. They grub and so will you, real talk.

Maybe it’s the little bit of sugar they put in the fresh pole beans. It could also be the hot corn muffins that cradle their little pat of butter like a welcome hug. Or perhaps it’s the consistently perfect potato salad, not too pickly, nor too bland. And you could totally blame it on that banging plate of fried chicken they got going on. Either way you look at it, Mama J’s better not go anywhere. PLEASE don’t. I mean…they could do with more seats, a bigger kitchen, a faster way to get those morsels into our mouths but beyond that, I say stay right where you are. How can anyone be living in Richmond and not visit Mama J’s whenever they feel like crushing on some perfectly seasoned homestyle classics? Make your way. Eat some of those mile high cakes. You can even do carryout, but get to where you’re going while your food is still hot. Nothing beats that.

I ate these things one time. I’ve been dreaming of them ever since. It was at Broad Appétit–I got the spinach mushrooom cheese emanadas with the special dipping sauce. Oh my good gracious what in the world. It’s heavenly. It’s bliss. You need to try those things. They’re handmade and so fresh. They’ve got all the elements of quick, saucy, crispy, green, and yummy. What’s not to love? Here’s a family business that literally just showed up on the scene and I can’t ever imagine not being able to find them again. Small, handheld pillows of delicately seasoned fillings are what you’ll find on this truck, along with pressed green plantains fried like tostones and perfect to dip into the rest of your sauce.

Speaking of which, THAT SAUCE! I’m letting you know right now. Get extra. It’s humble ingredients combine to become something incredibly grand. Next time you see that truck, get in line. The spinach mushroom ones are always the first to go bye-bye. If Happy Empanada ever left Richmond, we wouldn’t know what to do.

I know it seems unlikely, but that little University of Richmond café on Broad Street stays jumping like no tomorrow. They have this incredible salad bar in there, and I eat from them like three times a week. It’s only a couple of blocks away from Library of Virginia and pretty much everything else in the Downtown area. The line will let you know what time it is, just as soon as you get in the door.

Order the half salad. It’s plenty big. They have edamame and these dainty little diced tomatoes. Oh, and Kalamata olives, roasted red peppers, grilled asparagus, and even firm cubes of avocado. Right in front of you, there’s someone to grill Thai flank steak, salmon, garlic chicken or spicy shrimp to lay on top of your creation. Go nuts! Everybody’s up on it, you might as well go down there, too. Try the buttermilk tart for dessert or the smoked red pepper gouda cup of soup. Clearly, from all that traffic, they’re hitting on something good up in there.

Don’t forget to keep up with #untoldrva on Facebook and stay tuned for what’s happening with our little side project COMMUNIVERSITY as we make a way for the brightest, brokest folks who deserve to be in the room. Get in touch by emailing joinus@untoldrva.com.