#untoldrva’s COMMUNIVERSITY: The little side project that could

Ever look around at a creative event and notice that everyone kind of looks the same? Maat Free of #untoldrva–in cooperations with the folks at TEDxRVA–may have hit upon the beginnings of the solution. Blurb: Since debuting COMMUNIVERSITY at TEDxRVA, Maat Free of #untoldrva is watching change happen before her very eyes. Get in on the game, and join up with COMMUNIVERSITY to make your events more inclusive.

This way of thinking is downright revolutionary. It makes all kinds of sense to create authentically diverse collaborative spaces where the exchange of ideas between unfamiliar people doing similar work is transformative, organic, and true. Imagine the ideas this concept will spark at your next big gathering, when fresh, interesting voices join the debate and find connection points that resonate beyond the homogenized status quo.

The next stop for COMMUNIVERSITY is the AIGA Member Roundtable on Monday evening, May 4th, at CapTech in the Fan. We’re currently scouting for new COMMUNIVERSITY scholars of all ages and backgrounds to help us expand the narrative at this event. Although the room will be full of new faces, everyone’s super stoked about coming together to help advance the field of creative design as a professional craft and suggest ways this organization can be more inclusionary as a vital cultural force.

Then on the following Monday evening, May 11th, at Ardent Craft Ales in Scott’s Addition, COMMUNIVERSITY will be the official recipient of the donated funds raised by the wildly popular storytelling collective, Secretly Y’all, for their upcoming Ancestor-themed event. This month’s topic is being presented as a very special collaboration with #untoldrva. On that night, Richmond will come together to journey through the mysterious twists and fascinating turns within the forests of our own family trees.

Be sure to check out our friends who run The Cheats Movement for their latest event at Gallery5 on Friday evening, May 8th. They’re curating an unforgettable experience that highlights the intersection between hip hop films and music. Cheats made it possible for us to sponsor five unsuspecting COMMUNIVERSITY scholars to come through and represent. This is gonna be one of those “Everybody was up in there, where were you?” situations. Knowing this, we immediately contacted Art 180 and slid a couple tickets to their dedicated crew of gifted young orators and lyricists. So yeah, you should come. We’ve got a spot for you, even if old school, Golden Age hip hop films have never been your thing. Maybe now they could be. Just reach out. Let us hook you up.

And last but certainly not least, #untoldrva is visiting WRIR 97.3 to kick it in the studio with our homie Chris Dovi to talk about how COMMUNIVERSITY is making a new lane and changing the game. Tune in to Dovi’s show Open Source at 2:00 PM, Friday, May 1st. No telling what plans we’ll hatch when we put our heads together.

Get in touch with COMMUNIVERSITY and #untoldrva

Looking for a way to volunteer or donate or find your way into the room of your dreams? We’d love that! This team is growing every day. It’s all going down so we can open things up and see what happens when cost prohibition is no longer a thing for the brightest and the brokest among us.

In case it wasn’t that way before, you are now rocking with the best.

Long ago, this city was a breeding ground for uncompensated laborers. In a way, it’s kind of still like that. The creative community is a community of people who choose to invest our lives in doing true, soul-fulfilling work to build the world we dream of, but that kind of thing isn’t necessarily going to pay our bills.

Check the math: anything under $40K per year is poverty. Most DIY creative folks in town are in poverty. Yes. The struggle is real.

The first iteration of TEDxRVA in 2012 brought with it $100 conference tickets. $100? side eye Organizers at TED realized the limitations of that price point, so this year they reduced the price to $50. Clearly, it’s worth it. TEDxRVA is creative fuel. So many people deserve to go. So many people NEED to go. But $50 and a day of missed work is a lot to afford.

This cycle repeats over and over. Look at how many cost-prohibitive lectures, workshops, and group sessions going on in RVA. You get tired of hearing about stuff. You know you’re not going to have the cash to get in. Look around the room when you DO make it out to these events. The spectrum of diversity is extremely limited. There are all sorts of fascinating characters who you don’t even know because they can’t afford the ticket price to get past the front door. They would have been the life of the party, their ideas would have opened up whole new lanes of thought-provoking dialogue.

This issue is one that I felt deeply connected to, so in 2013, I started working on a hack to fix it. The challenge: What can I do to help diversify our local event audiences to include a wider demographic so that the architects of RVA’s creative community can expand in all directions? It turned into a nimble little side project called COMMUNIVERSITY, where everyone learns from everyone else. 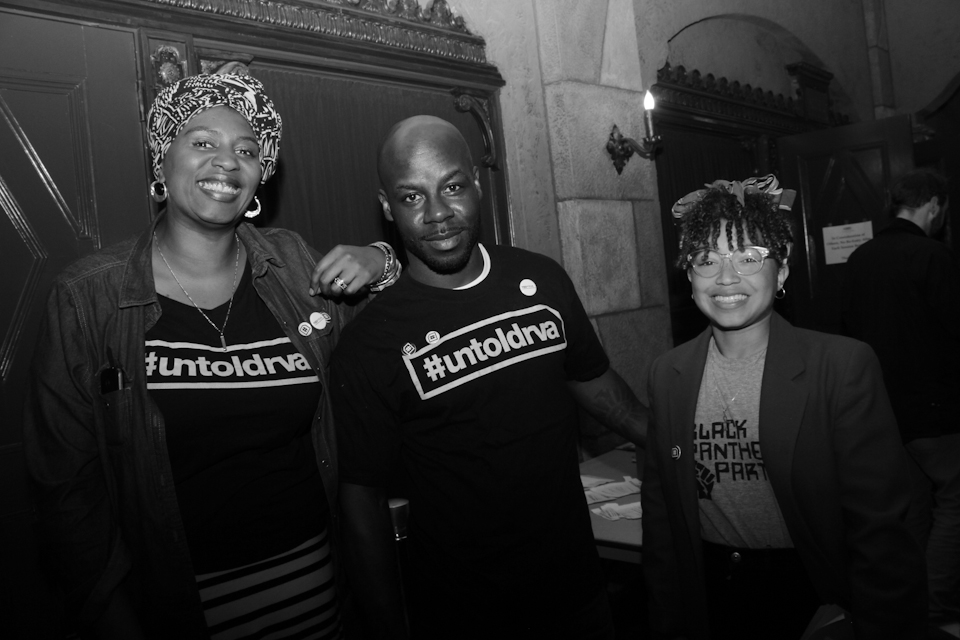 It’s simple. #untoldrva becomes a connector to pair some the sharpest folks in town with comp tickets to the steadily increasing roster of events that need the energy and presence of really bright, talented, everyday people to join the debate, the discourse, the discussion, whatever the topic might be. By doing this, we open a door for those who probably wouldn’t have been able to attend but we also gain a whole new realm of perspectives. 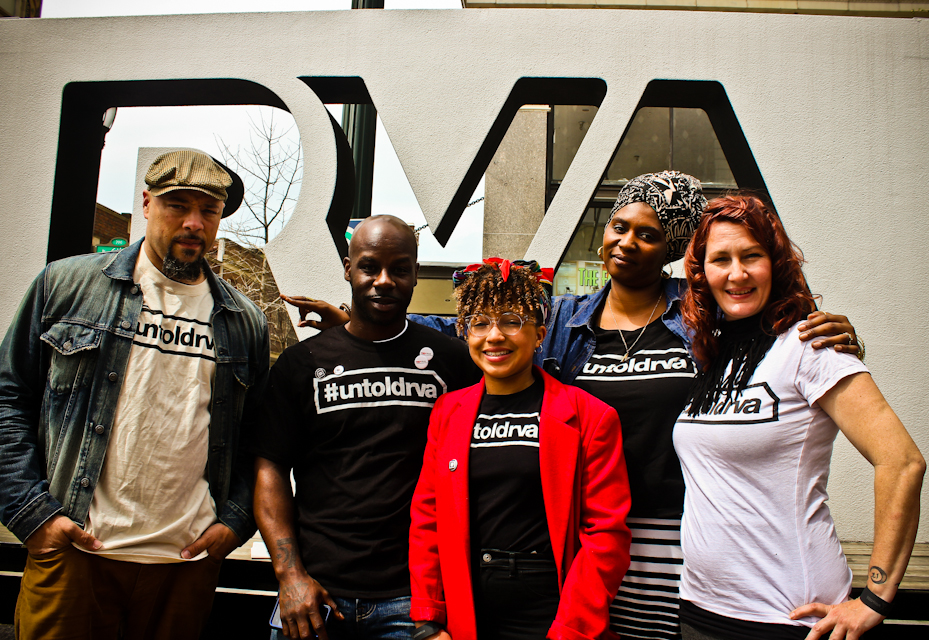 After the event (a day or two later), Untold RVA gets the COMMUNIVERSITY scholars together and hosts a charrette (a cool, laid back creative-type focus group) to process through their observations and experiences. Everyone’s notes are compiled and presented to the event organizers so that the feedback can be used to improve future events while considering the feedback of a previously under-represented demographic (bright and broke).

Last Friday was TEDxRVA and, finally, the launch of the #untoldrva COMMUNIVERSITY. A few of the TEDxRVA event organizers were present at the Self Determination programs on Richmond’s African Burial Ground on April 3rd, where the message of the day was: “White people, open a door for Black folks, just as many of your foreparents opened a door for Black folks escaping to freedom on the Underground Railroad. And Black folks, let White people help you.” Check out the video.

These TEDxRVA folks answered the call to action and donated five tickets to empower the first round of COMMUNIVERSITY Scholars which included a fatherhood initiative liaison, a facilitator of grassroots mental health programming, a historical preservationist, a feisty young Open High School student, and me.

Oh yeah, mad props to TEDxRVA for reducing the general admission ticket price from $100 to $50 for everyone this year and reaching out to some “uncommon” folks to present. 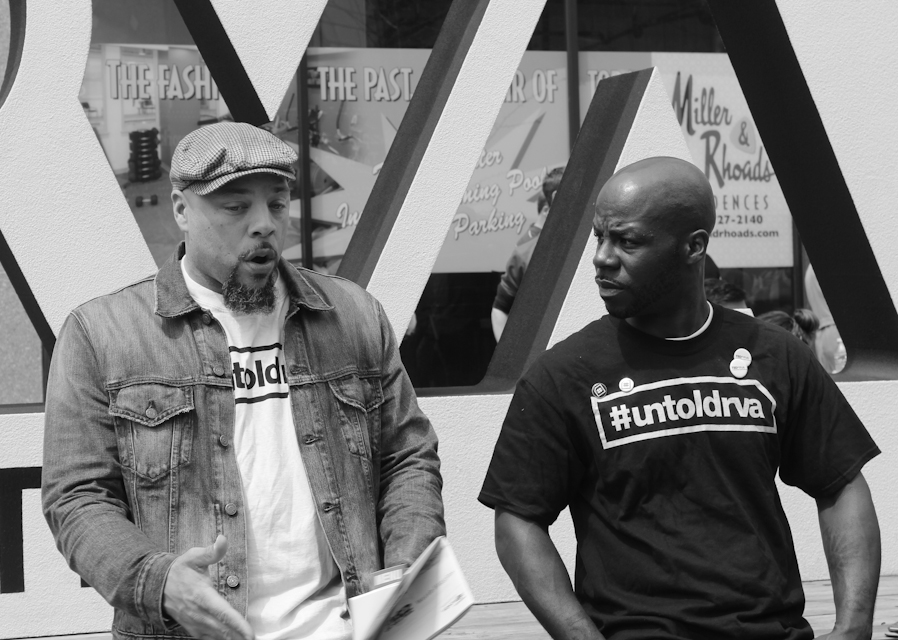 This campaign to broaden the creative landscape is going to be very interesting, that’s for sure. We’ll definitely have more fun when we’re all together. Stay tuned.