Our first days on the road are travel days, but that’s to be expected. However, a surprise on our first chase day left us all feeing very satisfied. Top: The sun sets over a field in western Iowa. We hope the high clouds in the distance are a sign of thunderstorms in our future.

WAKEENEY, Kan. – We’ve been on the road for three days, and so far it’s been a lot of driving.

We had a relatively easy first day, departing Blacksburg around 10:00, after much fanfare. Our trek has been profiled by both Virginia Tech’s university relations and WDBJ TV, who featured veteran chaser Kathryn Prociv’s Appalachian tornado research.

To be honest, driving over 1500 miles across eight states is pretty much what you’d expect – there’s not a lot of excitement going on around us. However, there’s a lot of activity that goes on within our vans. We’ve got a mix of people, including several seniors, some upperclassmen, and even one brave freshman. We don’t all know each other, and so we spend some time bonding and getting to know our companions.

We also spend time working on forecasts not long after we hit the road. As trip leader Dave Carroll has already said multiple times on this trip, storm chasing is often “like a chess match.” Not only do we have to worry about the forecasts for today and tomorrow, but we also have to be looking further down the road, so to speak. If we chase in Nebraska tomorrow, will we be able to chase in South Dakota the day after? We have to get to where the storms are, and some times we may have to sacrifice one out-of-reach storm day so that we’re not out of position for a better chase the day after. 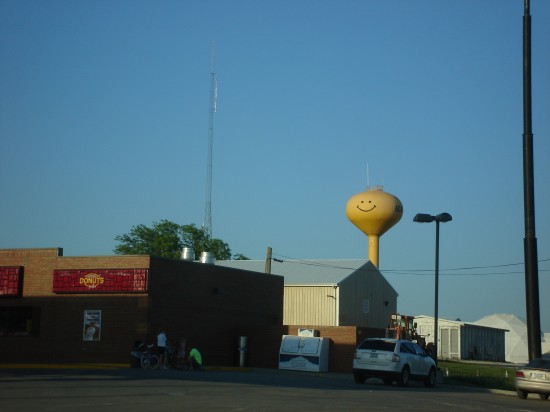 The smiling face on the water tower in Adair, Iowa greeted us as we stopped for dinner on the road Wednesday night.

Our focus has been on Thursday, Friday, and Saturday for the majority of our time on the road so far. There are three key ingredients for thunderstorms – moisture (humidity), instability, and a trigger to lift air parcels into the unstable levels of the atmosphere. While we’ve had some luck finding these ingredients in our forecast, they haven’t been very co-located. Finding those factors in the same place are what we need. Without that, we only have a busted forecast. It’s great if you want to spend all day standing around in the sun, but not if you’re hunting thunderstorms.

Thursday surprised us. We spent the night prior in York, Nebraska, about an hour west of Omaha. The models up to that point weren’t very impressive. We knew that anything that developed would be in the western portion of the state, near Colorado and Wyoming. We were looking at a couple hours to get where we needed to be; that’s not really a lot in the world of storm chasing. We got to sleep in and enjoy a pretty easy morning. Though we had planned to head toward South Dakota, chasing there both Thursday and Friday, we ended up diverting south from North Platte, Nebraska, into northwestern Kansas. 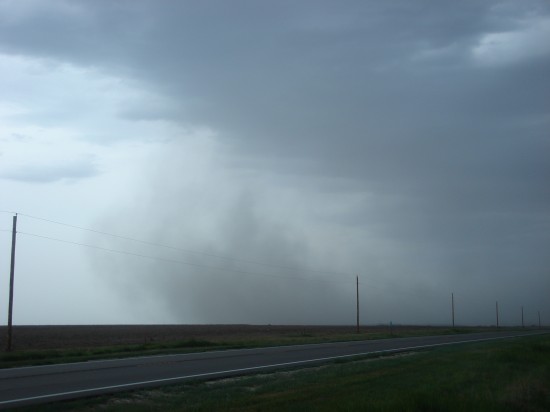 Billowing Kansas dust kicked up by a dying thunderstorm.

This meant we would not be able to chase in South Dakota on Friday, but it paid off. We intercepted a collapsing thunderstorm, getting blasted by 60 mph winds and coated in a layer of Kansas dust. For a day that was incredibly marginal, it paid off with an intercept that can be more rare than intercepting a tornado. It’s not exactly what we came out here to chase, but it certainly serves as a reminder that there’s more to storm chasing than just the big events. Thunderstorms are incredibly complex, and sometimes very photogenic systems.

Our chases for Friday and Saturday keep us in Kansas, working our way east as a fairly turbulent system moves toward the eastern US. It’s looking like the Plains will be quiet after that, however; our trip is likely going to end earlier than any of us hoped, simply because it’s not worth spending what money we have hanging out chasing clear skies.

In the meantime, we’ve got two more great chase days, and we’re going to make the best of them.