Storm Chasing with Weather Dan: A change of plans

Sometimes the weather throws us a curve ball. And sometimes, we skip the curve ball altogether and get thrown a knuckle ball instead. Top: A view looking west from the top of the southern half of the Monument Rocks formation in northwest Kansas.

LEWIS, Kan. – As a writer, when it comes to a series like this, I like to include at least some of the traditional parts of dramatic structure — things like rising action, climax, and denouement (Especially because it’s fun to say denouement). Our 2011 chase worked out well in this regard.

As a meteorologist, I know that the weather rarely makes things that easy.

After a successful intercept on a very marginal storm on Thursday, we were greeted by a very strongly capped atmosphere on Friday. “Cap” in this case is short for “capping inversion,” and is a layer of warm air in the atmosphere trapped above a layer of colder air. Friday’s cap was particularly intense, choking off storm development across west Kansas. Storms did develop farther north across Nebraska and South Dakota, but venturing that far north would mean that we would have been unable to chase in Kansas and far southern Nebraska the day following, and Saturday was being projected to be a bigger day for us.

So we went sightseeing instead.

The Monument Rocks National Natural Landmark is a limestone rock formation in the northwest corner of Kansas. Accessible only via dirt road, the formations rise over 100 feet above the surrounding plains, offering some amazing views. The rocks here are a rich source of fossils and date back more than 65 million years. For a couple hours one hot May afternoon, they were the domain of the Hokie Storm Chasers. 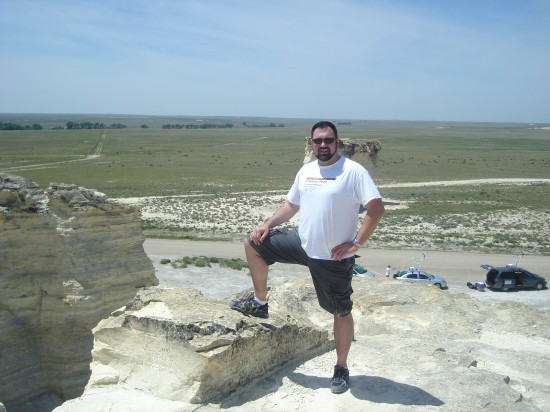 Yours truly, after conquering the Monument Rocks. Likely my last attempt at rock climbing for a while. 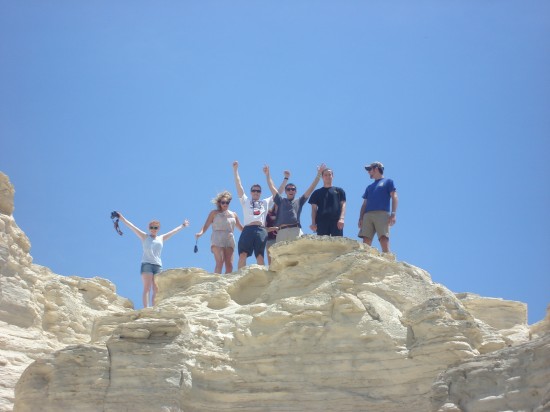 Friday represented an off-day for us, but it was clear that our opportunities to chase were going to be limited. One of the big ingredients for thunderstorm development – moisture – was going to be in limited supply in the coming days. Saturday was our last real opportunity to chase anything, and even then, the chance for anything tornadic would be incredibly limited. despite our best intentions, our original two-week chase trip was going to turn into a one-week trip. We were going to have to make Saturday’s chase count.

If this were baseball, we would be the Mudville Nine, and the ninth inning was about to begin.