Nearly two inches of snow blanketed most of central Virginia on Thursday, leading to some isolated power outages and widespread enjoyment of a four-day weekend. 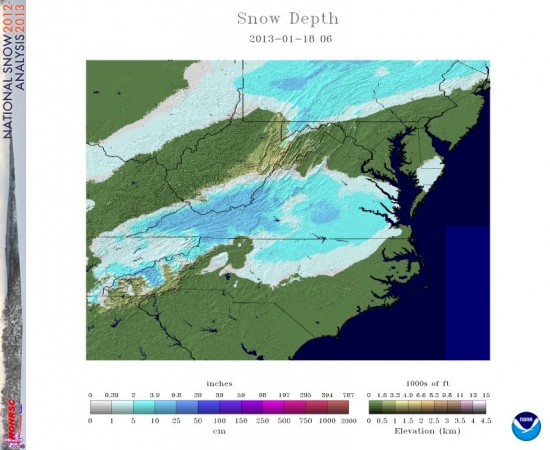 The above image by the National Operational Hydrologic Remote Sensing Center shows the snow depth across Virginia and the Carolinas this morning following yesterday’s winter storm. While totals across most of central Virginia were in the 2” range (see map below), much of southwestern Virginia received 7” or more, and some localities in southern West Virginia recorded more than a foot.

Here’s a plot of selected regional snow totals from the National Weather Service office in Wakefield: 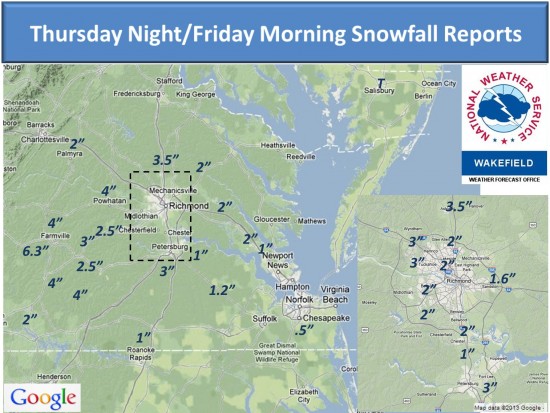 The excitement of the night definitely came in form of two separate rounds of thundersnow (and for some, VCU’s overtime win). The thundersnow gathered over 150 mentions on Twitter while it was happening – some reported seeing it as a trending topic, but Twitter’s algorithm takes into account the people you are following, so your mileage may vary.

Thankfully power outages in central Virginia appear to have been relatively limited. Dominion Virginia Power reports approximately 38,000 customers were affected across their entire system. They did not have breakdowns by region available at the time I contacted them, but the peak number I saw reported on Dominion’s website for the Richmond region was just over 11,000. Meanwhile, about 10 times as many customers have been affected in Appalachian Power’s service region in southwest Virginia, as more than 110,000 were out at the peak of the storm. Restorations are coming quickly for the affected customers.

Richmond received a total of 1.56” liquid precipitation (rain and 1.6” of melted snow) on Thursday, setting a record for the day. The old record of 1.23” had been set back in 2010. For the week, we added a total of 4.24” of liquid precipitation. I don’t know if this is a record for any 4-day period in Richmond, but I’ve requested and will be reviewing the climate data from the National Climatic Data Center to see if that may be the case.

Unfortunately, with all the water Virginia has received this week, many of the rivers are running quite high. Several eastern Virginia rivers, including the James, Appomattox, Meherrin, and Nottoway are all at or near flood stage and have triggered flood warnings. In particular, one is in effect for the James River based on the water levels at the Westham gauge. 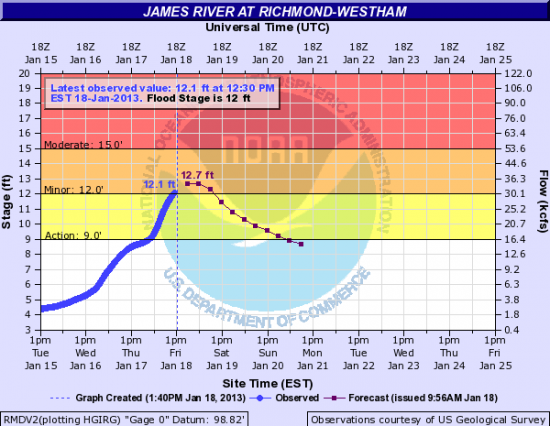 …FLOOD WARNING EXTENDED UNTIL SATURDAY AFTERNOON…THE FLOOD
WARNING CONTINUES FOR
THE JAMES RIVER AT RICHMOND WESTHAM
* UNTIL SATURDAY AFTERNOON…OR UNTIL THE WARNING IS CANCELLED.
* AT 09:30 AM FRIDAY THE STAGE WAS 11.6 FEET
* MINOR FLOODING IS FORECAST.
* FLOOD STAGE IS 12.0 FEET
* FORECAST…THE RIVER WILL CONTINUE RISING TO NEAR 12.7 FEET BY THIS EVENING. THE RIVER WILL FALL BELOW FLOOD STAGE TOMORROW LATE MORNING.
* AT 13.0 FEET…APPROXIMATELY 20 ACRES OF LOWLAND FLOODED IN VICINITY OF GAGE.

Stay safe and enjoy the snow while it lasts – the outlook for this weekend is sunny with near-average temperatures for mid-January.

Oh how I love Thundersnow.

As I discussed earlier, it took what probably felt like forever with all the news of snow coming out of western Virginia, but Richmond finally made the flip from rain to snow around 5:30 this evening.

Without getting too geeky, the driver for all the thundersnow was a very tight temperature gradient – a strong change in temperature over a short horizontal distance. This created a region of very unstable air around 10,000 feet that behaved in a similar way to a summer thunderstorm. The result – all the thunder and lightning that you’re used to in the warmer months, and all the snow that comes with a winter storm. “Hey, you got thunder and lightning in my winter storm!” “Hey, you got snow in my thunderstorm!”

The snow has pretty much wrapped up here in western Virginia; I’m sitting at somewhere around 7.5” total for the storm. To be honest, that’s a little more than I was expecting. I underplayed some of the dynamics and mechanics that went into creating the heaviest snowfall amounts, and it burned me.
We’ll see some continued snowfall over the next couple hours, wrapping up around 1 AM.

Power outage numbers are beginning to climb now. As of this writing, more than 3,500 Dominion Virginia Power customers in Southside Virginia, and another 3,000 customers in the Shenandoah Valley are dark. Compare this to southwest Virginia, where more than 103,000 Appalachian Power customers are out tonight. I expect these numbers will climb higher tonight as wind gusts to 20mph will bring down some heavy snow-laden trees and power lines.

I’m hearing the first reports from sleet mixing with the rain in parts of the western suburbs of Richmond, especially around Innsbrook and Bon Air. Where are you and what are you seeing?

I’m hearing a few questions from people on Twitter wondering “where’s the snow?” As I’ve told them – patience. Like I wrote earlier, we’re not expecting to see the flakes move into central Virginia for a few hours. Temperatures are coming down west of the Blue Ridge, where they’re in the mid 30s from Roanoke all the way west to Wise. However, further east – from Lynchburg and Danville to Richmond and Tidewater – temperatures are still in the mid and upper 40s. That’s going to make a snow changeover difficult until we get closer to dark and temperatures begin to drop along with sunset.

Along with this, the Storm Prediction Center – the group responsible for issuing severe thunderstorm and tornado watches during severe weather periods – also issues discussions of heavy snow and other winter weather events as they occur. They recently issued an analysis of today’s developing system, specifically focused on southwest Virginia and southern West Virginia.

SUMMARY…MODERATE RAIN/MIXED PRECIPITATION WILL TRANSITION TO HEAVY SNOW OVER THE HIGHER TERRAIN AND BECOME INCREASINGLY WIDESPREAD DURING THE LATE AFTERNOON WITH SNOWFALL RATES OF 1-2 IN/HR EXPECTED.

While the persistence of warm air this afternoon is leading me to question this some, there’s still the potential for some of these areas of heavy snowfall rates to make their way into central Virginia later tonight.

I’ve plugged it before, but now’s a good time to plug it again: when you see precipitation today, be it rain, snow, or anything else, please report it to the Precipitation Identification Near the Ground (PING) project. They have a web interface as well as iOS and Android apps. It’s free, no registration is required, and no personal information is collected beyond your location. Use your smartphone for science! The data you report helps improve our forecasts down the road. 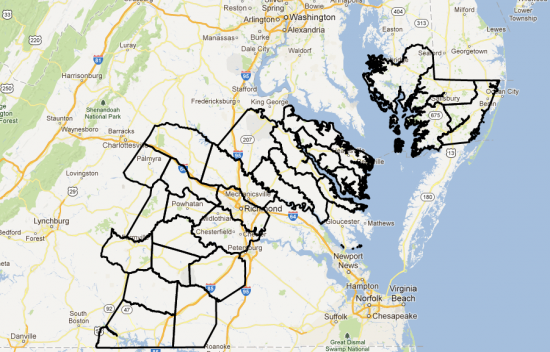 Image via the Iowa Environmental Mesonet

The overnight model runs have come in, and my thoughts haven’t changed that much. Here are the highlights:

Timing
Look for rain to continue off and on through the morning hours. Snow will begin to mix with the rain in the afternoon, especially in the 3-5 p.m. time frame, switching to all snow after sunset. Snow will start sticking to the roads during this changeover period, and roads will become slushy and slick as the snow begins to stick on the already-wet roads. The snow will begin to wrap up in the hours after midnight, and will be completely done by the time you wake up to go to work on Friday.

How much am I going to get?
I expect that Richmond City and most parts of Henrico and Chesterfield Counties will see between 2 and 4 inches of snow by Friday morning. The National Weather Service is forecasting 3-5” of snow across the same area; I’m less confident about that 5” number than the NWS is, but it’s certainly not out of the realm of possibility.

Am I guaranteed to get 2-4” of snow?
When it comes to snow forecasting, nothing is guaranteed. There are scenarios where this number could be significantly less – especially if the cold air we need to change the precipitation type over to mainly snow doesn’t arrive until much later. If we don’t change over to snow by 7-8pm, it’s going to be hard to get a lot of snow out of the system. Given that this system is already performing quite well and pulling snow as far south as southern Mississippi, this looks to be less of a concern for the time being.

On that same token, if we change over earlier, or if a heavy snow band sets up over the area – something that’s very difficult to forecast more than a couple hours in advance – we could get as much as 5” or 6” without a lot of difficulty.

But Weather Dan, you promised!
I don’t make any promises when it comes to snowfall forecasts. Despite all my forecasting experience and the collective experience of all the meteorologists I know, this could all still go horribly wrong. Remember Godzilla Wednesday?

Is this snowball snow?
It’s going to be heavy, wet snow with big flakes – perfect for snowballs and snowmen.

Got any other questions about what to expect today/tonight/tomorrow? Leave them in the commments!

That’s right, I said the s-word.

The National Weather Service has issued a Winter Storm Watch valid from noon Thursday to 1 AM Friday for the following areas:

Image via the Iowa Environmental Mesonet

THE NATIONAL WEATHER SERVICE IN WAKEFIELD HAS ISSUED A WINTER STORM WATCH…WHICH IS IN EFFECT FROM THURSDAY AFTERNOON THROUGH LATE THURSDAY NIGHT.

* ACCUMULATIONS: 2 TO 4 INCHES…WITH ISOLATED AMOUNTS UP TO 5 INCHES.

* IMPACTS: HEAVIEST SNOW ACCUMULATIONS WILL BE ON GRASSY AREAS. SNOWFALL IS EXPECTED TO BE HEAVY AT TIMES WHICH WILL LEAD TO HAZARDOUS DRIVING CONDITIONS.

A WINTER STORM WATCH MEANS THERE IS A POTENTIAL FOR SIGNIFICANT SNOW…SLEET…OR ICE ACCUMULATIONS THAT MAY IMPACT TRAVEL. CONTINUE TO MONITOR THE LATEST FORECASTS.

Right now, the 2-4” seems like a fairly decent one, though I would caution people not to hang on to that 4” number too much. Some of the models are projecting amounts even higher; however, the snowfall is going to be tempered by a couple things. Expect rain to resume during the day tomorrow; it will likely continue as rain through sunset and the evening commute. I expect the precipitation to switch to a rain/snow mix and then eventually all to snow from the 5pm to 8pm timeframe tomorrow evening, and continue as all snow until 1 or 2 AM Friday morning.

Temperatures are going to continue to hover near freezing all night long, so it’s very possible that some additional warm air could foil this forecast. If it doesn’t, we’ll see snow fall as heavy, wet flakes. The general rule of thumb when converting liquid water to snow is that 1” of water converts to about 10” of snow; however, with temperatures closer to freezing this ratio will be smaller, closer to 6:1 or 8:1, so that we get less snow out of the same volume of water. That could hurt snowfall amounts some, and the wet ground will aid a little in melting some of the first flakes that fall.

This is just an early assessment; the models only really picked up on the snowfall potential beginning last night, so we’ll probably see some more shifts before the event begins tomorrow evening. Right now, be prepared to alter your evening commute plans on short notice. If the switch to snow begins earlier rather than later, more than a few people may encounter some headaches trying to get home tomorrow evening.

I’ll be back with another update after the next round of model runs later tonight. By tomorrow morning, this watch will become either a winter weather advisory or a winter storm warning.