Comfort Executive Chef Travis Milton announced this morning that he will be leaving his current position at the end of June to open his own restaurant in an undetermined Scott’s Addition location. The champion of Appalachian foodways will call the new spot “Shovel and Pick,” as an homage to the seal of Wise County, Virginia, Milton’s childhood home.

Shovel and Pick will be what Milton calls “Virginia-centric,” meaning the chef will be sourcing as many ingredients from our commonwealth as humanly possible. He says, “I’ll be growing somewhere around 80 percent of my own produce. The heritage ingredients that it will take to do this right are not available commercially or even through local farms currently.” It won’t just be the produce. Virginia-raised livestock will be a priority as well, says Milton: “I will be working heavily with Lockhart family farms on my proteins, Josiah and Jocelyn are amazing people that do even more amazing work.” More on the Lockharts here and also here, dang it!

Milton plans to hold several pop-ups with notable friends from around the region over the next few months; and he’ll be knee-deep in the sold-out Appalachian Food Summit this fall. Richmond Magazine’s Stephanie Breijo has more details on what to expect from Milton in the near and distant futures.

Executive Chef to the Gods

Zeus named Patrick Carey as its new Executive Chef this week. Previously, Carey was Executive Chef at Bistro 27 and Lulu’s. Carey says he hopes to strike a balance between menu staples and new Southern-inspired dishes, adding, “I’m excited to work together with Angie Dudley on updating Zeus Gallery Cafe. I feel she has progressive ideas for the location.”

And Speaking of The Greeks…

Now begins the four-day period each year in which I pretend I’m half Greek, half hedonist, as I Katamari-roll through the Richmond Greek Festival, squeezing lemon on everything and randomly shouting “OPA!” to nothing in particular. It’s four days long for a reason; this is a marathon, not a sprint. 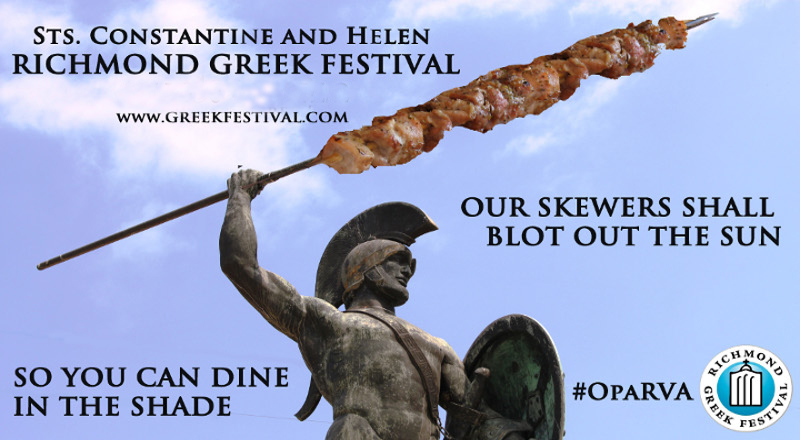 Please, just look at this poster. LOOK AT IT.

ON AND OFF BROAD

You hardly ever think about the rest of the garlic, right? It’s a bulb. You peel away the papery part and pop out a clove, and voila: garlic! But there’s actually an edible stem that shoots itself out of garlic’s bulby bottom in the first few months of growth. These are called garlic scapes, and they’re like a sweeter, gentler garlicky thing that you should take advantage of now because they’re usually only around for a few weeks. Onward, to the farmers market!

Buy some fine Virginia-made spirits at any participating Virginia ABC store, and you’ll soon be able to shield your hungover eyes from the sun with your very own “Virginia is For Lovers” trucker hat. As of yesterday, five stores, including our own beloved Carytown ABC, have been stocked with the hats, to be given to customers to who buy 750 mL bottles (or the next biggest size if no such size exists of that particular spirit), thanks to a partnership between Virginia Tourism and the Virginia Department of Alcoholic Beverage Control.

You all wanted more, so now we're making them daily! #stellasgrocery #rva #rvadine