Lockhart Family Farm’s Josiah Lockhart is bringing heritage and rare-breed meat to chefs and consumers and planning a distribution network to do so more efficiently. He will represent Slow Food RVA at the inaugural Slow Meat symposium in Denver. Later this month, Slow Food USA will host its first-ever Slow Meat Symposium in Denver, Colorado. The symposium will bring together 100 delegates, including Slow Food leaders, farmers, chefs, butchers, and experts from organizations including The Humane Society and The Union of Concerned Scientists. “We believe that we can begin to turn the herd with the strength of the Slow Food network,” the event description explains. “Evaluation will increase the likelihood of success in linking supply to demand, growing trust between producers and consumers.” Josiah Lockhart, co-owner of Lockhart Family Farm and a board member of both the RVA Food Co-op and Slow Food RVA, will be among the delegates, sharing his expertise on raising heritage and rare-breed animals.

“The Slow Meat summit is designed to be the first coming-together of people who deal in high quality, slow grown meat–whatever type of animal it is. There are a lot of issues with the market and how the system works in getting meat to places.” Take, for example, Lockhart’s poultry. If a chef in California wants to buy it to put on their menu, which several do, Josiah would first have to find an inspector to approve the product for interstate sale. That would drive up cost by an extra $1.50/pound, in addition to the already prohibitive shipping costs. “So the way the system works–it doesn’t…The idea is to talk about all these issues and have people from every part of the chain, everything from farmers to butchers to chefs, academics, consumers, really have a good, honest conversation about these issues.”

He was living in Scotland, where Josiah met wife Jocelyn, when the old family farm in Woodford, VA summoned Josiah back to the states. The farm had fallen into disrepair, and parents Eileen and Terry welcomed the help from the young couple, who had been studying sustainable farming practices under agricultural policy pioneer Pete Richie. During their time in Scotland, the two strengthened their commitment to social enterprise, teaching recession-proof skills in fields such as agriculture, woodwork, textiles, and catering to people facing long-term unemployment.

Located on a woodland farm in Woodford, VA, Lockhart Family Farm is truly a family business. Josiah works the land alongside Jocelyn and their two-year-old son Alexander, while Eileen and Terry manage the farm’s educational programs including summer camps for kids leaving Kindergarten through high school. Lockhart Family Farm currently raises pigs, rabbits, turkeys, and ducks for meat, as well as laying hens. The Lockharts specialize in species that we don’t see in the supermarket–animals that are either too labor intensive or cost prohibitive to raise and distribute on a large scale, such as the American Mulefoot Hog and the Silver Laced Wyandotte chicken. 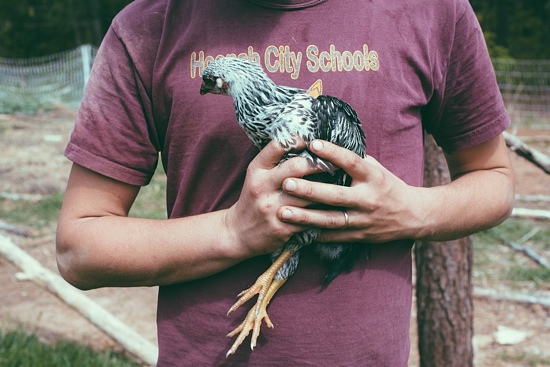 These animals are all on the Livestock Conservancy‘s Conservation Priority List–a collection of livestock species at risk of extinction. Many of them also have Slow Food USA’s Ark of Taste mark, which recognizes both rarity and culinary application. Think of the Ark of Taste like a giant ship rescuing edible plant and animal species from the great flood of commercialization-induced extinction…and then serving them for supper. Since 1996, more than 1,100 products from over 50 countries have been added to the International Ark of Taste. Slow Food USA’s Ark of Taste seeks to preserve edible plant and animal species that are as threatened as they are delicious–from the Hog Island Fig and the Bradford Watermelon, both of which were nominated by Slow Food RVA, to the Tennessee Fainting Goat, whose name is hilarious.

The flavor of heritage and rare-breed meat is unlike the majority of the mass-produced meat on the market today, and many chefs and farmers would argue that it’s superior. Aging allows for marbleization of fats and development of more flavorful dark meat; and a diverse diet creates a nuanced, complex-tasting protein that reflects the terroir of its origin. But the standards of mass meat production demand quick maturation periods to keep prices low. “I think the reason we have not very good animals in production is because everything is bred for a particular profit, uniformity of profit. People don’t like two chickens that look different, and our hairy pigs wouldn’t be able to go into a facility that was made to process a hairless animal. It’s more about efficiency and profit,” Josiah says. “Once people taste slow-grown meat, there’s no question about how good it is.”

Several Richmond chefs have developed a keen taste for slow-grown meat. The superior flavor and the ability to diversify menus among stiff competition are both compelling reasons why chefs like Estilo‘s Craig Smith are clamoring for more of Lockhart Farm’s pork and poultry. Smith used a total of six of Lockhart Family Farm’s Ark of Taste animals to create what was undoubtedly the most epic turducken in human history for Slow Foods Graze event last month. Since then, demand for the Lockhart’s Ark of Taste meats has steadily increased. Josiah has witnessed local chefs’ excitement over his livestock: “They may know of the Berkshire, the Tamworth, or even the Mangalitsa. But, show them the Mulefoot with its non-cloven hoofs and they are discovering something for the very first time.”

But fulfilling demand is another matter. Due to convoluted issues with the distribution process itself, getting these products into restaurants and stores can be challenging. So far, the Lockharts have been using educational programs, farm tours, homesteading workshops, and value added products to offset the economic limitations of raising less profitable livestock. Now Lockhart Family Farm is beginning to respond to meet the needs they’ve seen: “We’re going through a herd expansion over the next couple of months so that by fall/winter we’ll have increased supply to get back to the chefs. Distribution and supply is one of the hardest things for heritage meat mainly because it tends to be seasonal (some animals only have litters during a certain season) and in small batches.”

The ever-enterprising Lockharts are working to change that, not only through participation in the Slow Meat symposium but also in a more direct way: “I’m in conversation with a number of chefs and other heritage farms right now about creating a better distribution network. It looks like it will be some sort of a hub which sources meat from lots of small farms who, together, can make up an order to chefs. If we work hard, we might just be able to launch it just after Slow Meat.” In order to help create new opportunities for potential first-time rare breed farmers, Lockhart Family Farm plans to donate 1% of every sale to Slow Food RVA’s grant program, which encourages projects focused on increasing access to good, healthy, and fair food across central Virginia.