Whatever you think about meat, think a lot harder

Earth Day fast approaches, and there are big changes you can make to help out your home planet beyond being a champion recycler. Josiah Lockhart clues us into the worthwhile but daunting rebellion of sustainable meat farmers. Here’s what he means: despite a consumer’s best efforts–even their very best efforts–it is nearly impossible to eat a truly sustainably raised animal. We can eat organic, we can eat local, we can raise the damn cow ourself and slaughter it with artisanal knives, but we will still be contributing to one of the planet’s most unsettling problems: we’re ruining meat.

Only four companies provide almost all of the meat we eat. Farmers, Lockhart explains to me, usually have to enter into a contract with one of those four in order to get the seed money to set up a farm. Then Tyson (for example) supplies baby animals, the farmers raise them, and Tyson buys them back.

There have already been plenty of well-written articles and books about how sick, biologically messed up, and pumped full of drugs our meat is. And companies (like Tyson, in fact) are starting to swear off antibiotics in their meat, which is at least a little progress. But that’s just one piece of the pie.

“Farmers aren’t allowed to talk about what they raise and how they raise it,” says Lockhart. “But a lot of them are doing it anyway, despite legal action.” And the findings aren’t great. “Generally speaking, the buying power dictates the U.S. economy around meat. It’s not the farmer’s fault–there are some great people doing bad things who don’t want to be doing the bad things.”

This self-perpetuating cycle is one of those despair-inducing things about commercial farming, and while it’s not just limited to meat, meat is the bread and butter of Lockhart Family Farm. So you could say they think about it a lot.

Josiah Lockhart grew up in Stafford, expatriated to Scotland, and returned with his wife, Jocelyn, to take over operations of his family’s farm. He’s on the Slow Meat board along with about 30 other industry experts, and his area of expertise is biodiversity. To whit, if we (re)introduced some other swimmers to the gene pool, instead of the surviving, convenient couple of prevalent breeds (and genetic lines within those breeds), we wouldn’t need so many drugs. 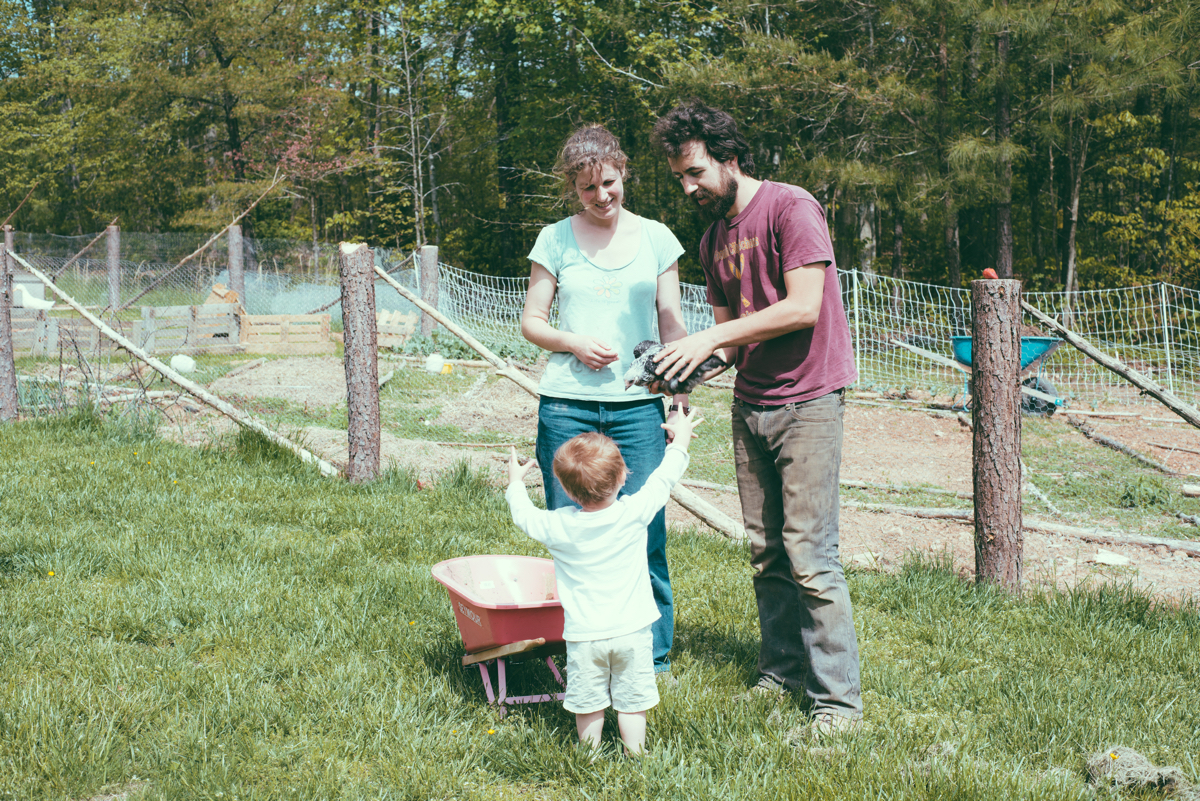 “Just like one family is more susceptible to a kind of disease, so are these pigs and cows and chickens,” he says. “And in the past year and a half, there’s been a pork disease that killed millions of piglets, so they develop a vaccine, when we already have the genetic answer.”

That answer is more responsible breeding, which could really change the landscape of commercial meat farming in as little as one generation. But as the industry has developed to prioritize speed and size, “convenience usually wins out. So chickens are now raised in four and a half to five weeks, whereas seven years ago it would be something like 16 weeks.” In other words, Tyson etc. have all made Cornish Cross hens the norm due to their willingness to grow fast and grow fat.

Even Polyface Farms, who Lockhart counts as one of the good guys with their sustainable and responsible practices, still has to use Cornish Cross hens. There simply aren’t any other hens available. (Oh, and did I mention it’s dirt cheap?)

And then there’s the distribution issue. “There are only two sizable farms in America that do their own distrubtion on any scale…and both [farmers] inherited their farms. That’s the only reason they’ve been able to do it, because they started out without any extra costs and had to vertically integrate,” says Lockhart. By now, they have their own built-in USDA facilities, which seems huge to someone with an enterprise the size of Lockhart Family Farm, “but to a massive feedlot, those two farms seem tiny.”

“But then,” says Lockhart. “There’s places like Niman Ranch, which started as its own farm and then quickly realized that scale is the most important part of making this work.” Niman started buying items from neighboring farms in order to beef up their distribution options. Now, they’ve become an aggregator with a national network with a product list that consists of sustainable meat from family farms.

Then there’s Belcampo, who have been able to make a living sans Big Four contract by integrating vertically (as this New Yorker piece details). 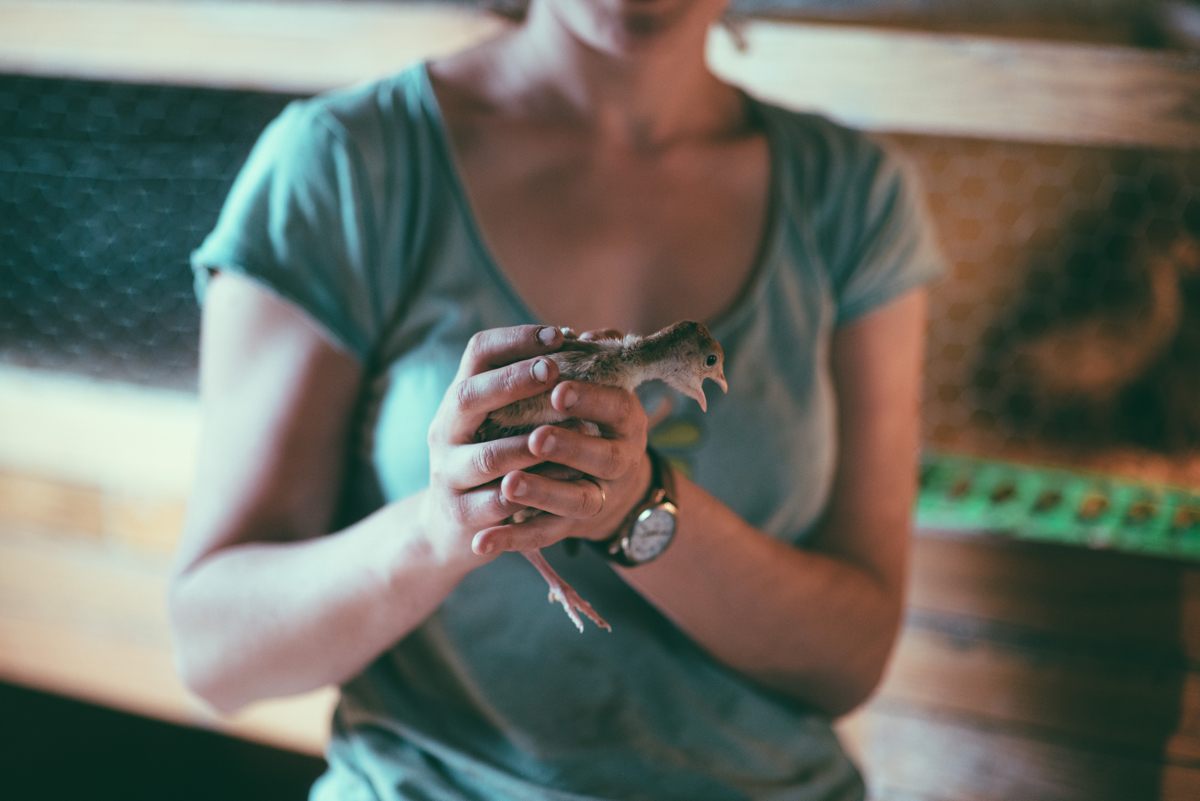 And of course, farms like Lockhart’s own and their ongoing initiatives to popularize different breeds. And while it’s a daunting task, he believes we are all on the brink of a breakthrough.

“As a public, we have pressured these [big] companies into making change in the past year. A lot of them are not the best changes we could want…” (McDonalds announced recently) that it’s cutting human antibiotics from its process, but not animal. “…But they are steps in the right direction. Contrary to what a lot of my contemporaries would say, I believe we should priase them when they do something good.”

So keep pressuring these companies to change their ways. Our buying power as a people is what makes or breaks their bottom line, and Lockhart believes that this new antibiotic-free trend by suppliers of cheap commodity meat is certainly a sign that they’re listening.

In the short term, we can raise the percentage of humans who shop at farmers markets. Lockhart urges market customers to ask their farmers how the meat was raised. Hell, he even urges you to ask your neighborhood Kroger what’s up with their meat, insisting that they will listen. “They may not have an answer for you right then, but they’ll have an answer for the next time someone asks. And asking shows you care…Our buying power does make a difference.”

Learn what labels mean, he also recommends. The word “natural” is essentially meaningless. Petroleum-based preservatives are natural, yet still have no business being in your food. Non-GMO is a good indicator of better-for-everyone meat due to the standards farmers have to meet, but everything else should be scrutinized carefully.

And be willing to spend money. “Commercial meat is not as cheap as you think,” says Lockhart, whose pork clocks in wholesale at $5.68 per pound, whereas commercial pork wholesales for $0.99. But the community picks up the costs of the side effects.

As the wealthiest culture in the world, we spend less and less on the very sustenance we need and more and more on technology we don’t need, cable packages, satellite radio, and other luxuries.

Meat is a royally screwed up system, but things don’t have to be this way. And if Josiah Lockhart–a farmer who spends the entirety of his time keeping up-to-date on the meat industry–can remain positive, so can the rest of us.

Keep up with the Lockharts (or, more accurately, keep up with their latest wisdom about meat and the meat industry via their informative and fascinating blog. Or, just eat only their meat (available at Ellwood Thompson’s) and the meat of similar farms, and you’ll be doing your part. And I’m willing to bet doing your part will be a much more delicious experience anyway.