150 years ago this week one of the legends of the Confederacy was laid to rest. The day after the passing of Confederate Gen. “Stonewall” Jackson, Richmond was given the chance to pay their respects to the beloved soldier.

The body of Jackson arrived in Richmond late in the afternoon on May 11th, 1863. Following rumors of his arrival on the 12:00 PM train, thousands of mourners had gathered at the train depot and waited for hours. When the train finally arrived at 4:00 PM, the crowd had swelled even larger, and church bells around the city began to toll. The coffin was removed from the train at the corner of 4th and Broad St. and placed in a waiting hearse.

Atop the coffin was placed a newly-designed Confederate flag, which had just been approved by the Confederate Congress a few days before. Jackson’s funeral would serve as its debut. 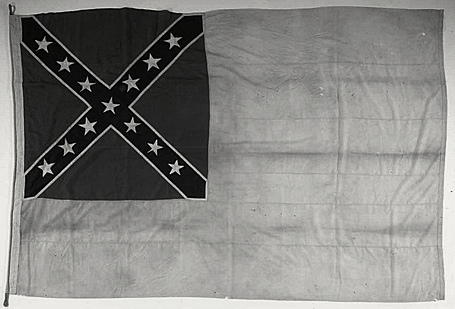 The Richmond Dispatch describes the route taken to the capitol:

The procession thus formed…[and] marched slowly to the corner of 9th street, and turned towards Main, entering the Capitol Square by the gate on Grace street. The military having formed a line extending across the Square past Washington’s monument, the body was slowly conveyed down the line to the Governor’s mansion, and carried into the large reception room. The bells were tolled till sundown, till which time hundreds of people remained on the Square. We have never before seen such an exhibition of heartfelt and general sorrow in reference to any other event whatever as has been evinced by all since the announcement of the death of Stonewall Jackson. (Richmond Dispatch, 5/12/1863)

Jackson’s body was brought to the capitol rotunda to lie in state where thousands paid their last respects:

On arriving at the Capitol the coffin containing the remains of the lamented hero, borne by the bearers, was conveyed to the large hall in the Southern end of the building, and the doors thrown open to afford an opportunity to the eager crowd to look upon the features of one whose death they regarded as a great national calamity. Good order was observed, and the dense crowd slowly made its way through the rotunda into the large hall where the coffin laid, and as they passed gazed for the last time upon all that is mortal of the gallant dead. (Richmond Daily Dispatch, 5/13/1863)

After the public had a chance to say farewell, the coffin was removed and taken once again by train to Jackson’s home of Lexington, VA where he would be laid to rest. In an editorial, the Richmond Daily Dispatch lamented that Jackson could not be interred at Hollywood Cemetery near President James Monroe’s tomb, “that beautiful spot, so near the theatre of his glory, where every breeze wafts his renown, and the murmuring waters, as they roll solemnly by, seem to attune themselves to sweet yet mournful melodies of the grave.” While Hollywood would be the final resting place for several of the Civil War’s famous generals, it would not be the case for Jackson.

North of Richmond, Confederate Gen. Robert E. Lee still reeled from the loss of Jackson, but after his victory at Chancellorsville, he knew he must press forward to keep the initiative. The war would go on despite the loss of Jackson, as it had continued on without the thousands of other brave soldiers already lost to both sides.