Civil War: The Battle of Chancellorsville

As April came to a close, Union General Joseph Hooker had put together an audacious plan to take Richmond by flanking Robert E. Lee’s much smaller force at a little village called Chancellorsville. My plans are perfect, and when I start to carry them out may God have mercy on General Lee, for I will have none. Union General Joseph Hooker

It had been several months since the embarrassing Mud March and the removal of Union Gen. Ambrose Burnside. After a long winter standstill outside of Fredericksburg, April finally brought spring weather, and the new commander of the Army of the Potomac–Fighting Joe Hooker–was itching to live up to his nickname. His plan was as audacious as it was clever. He would send several brigades of cavalry west in an attempt to get around Confederate Gen. Robert E. Lee’s rear and head toward Richmond to cut off his supply lines and communications with the capital. He would then send the majority of his forces across the Rapidan River in secret to attack Lee’s left flank while a smaller force would remain in Fredericksburg to distract the Confederate general. Hooker had every reason to be confident: his force was twice the size of Lee’s, and he’d spent the past several months reorganizing and whipping his army into fighting shape. Hooker was ready to crush Lee and move on to Richmond. 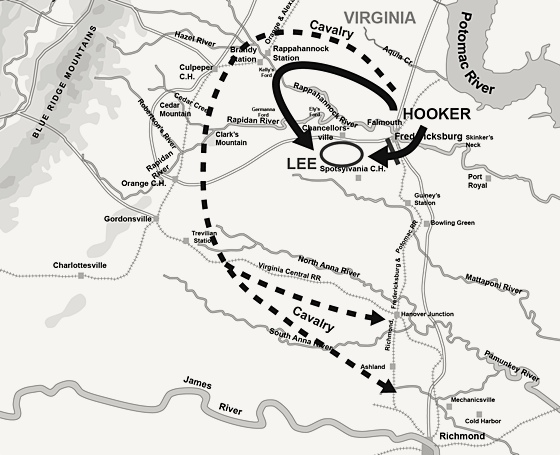 The only problem with Hooker’s plan was the man waiting for him on the other side of the river: Robert E. Lee. Over the course of the next several days, Lee would make dramatic and unconventional decisions which, with the help of a little luck, would lead to what many historians believe was Lee’s finest performance as a general during the Civil War. Nearly every military textbook written at the time would likely have advised Lee to fall back to avoid Hooker’s left and right flanking trap. Instead, he did exactly what the textbooks advised against doing. In the face of a much larger enemy force, Lee divided his troops and sent the majority of his army to confront Hooker’s flanking force while leaving about a fifth of his army in Fredericksburg to discourage any attacks there.

Hooker’s troops were in place on Lee’s left flank on the morning of May 1st, but they did not expect Confederate Gen. “Stonewall” Jackson to meet them there. The surprise clearly took them off guard. After a day of fighting, Jackson had seized the initiative, and Hooker fell back and returned to a more defensive posture. That night, Lee and Jackson sat by a campfire into the early morning hours to discuss their next move. Confederate Gen. J.E.B. Stuart arrived late in the night from his cavalry scouting with reports that Hooker’s large force had a right flank that was “in the air,” meaning not grounded in any natural features and vulnerable to attack. It was decided that Jackson would initiate a surprise attack on Hooker’s right flank. This decision required Lee to divide his army yet again, leaving forces at Chancellorsville to keep Hooker distracted while Jackson moved towards the flank. This was another incredibly risky action on Lee’s part, but if successful, one with significant reward.

On the morning of May 2nd, Jackson was fully engaged in his flanking maneuver when a Federal reconnaissance balloon spotted the Confederate troops on the march. Hooker was notified and sent word to his commanders to be prepared for a flanking attack. However, as the day and the fighting unfolded, Hooker came to believe that what the balloon had actually seen was Lee starting a retreat. By the time Jackson’s troops were in position, it was early evening and many of the Union forces were sitting down to dinner, rifles unloaded. When the rebel yell rang out from the nearby woods, there was barely enough time to mount a defense. Jackson’s attack was extremely effective and had the Union soldiers in full retreat, only hampered by the arrival of nightfall.

Anxious to continue to press the advantage, Jackson and some of his commanders scouted out ahead to investigate the possibility of a night attack. Upon their return, a picket of North Carolina soldiers mistook Jackson’s group for Union cavalry and opened fire, wounding Jackson three times and requiring the amputation of Jackson’s arm. The bold general that Lee relied on so heavily was now out of the fight.

On May 3rd, heavy fighting would continue both at Chancellorsville, where Lee had reunited most of his divided forces, and in Fredericksburg, where the Union forces there attempted another assault in the Second Battle of Fredericksburg. The fighting resulted in some of the heaviest losses in the war on both sides, but ultimately resulted in Hooker falling back across the river and giving up on his attempt on Richmond. The victory for Lee against a force twice the size of his own was truly remarkable and would give him the momentum to continue north and take the fight to the Union.

The victory was not without its cost though. Unlike the Union who had plenty of troops to reinforce the Army of the Potomac, Lee’s losses were much more difficult to replace. The greatest loss of the campaign was the wounding of one of Lee’s most reliable and trusted generals, “Stonewall” Jackson, whose fate we’ll learn more about in the next column.