The Civil War icon meets his fate 150 years ago this week. Last month I wrote about the Battle of Chancellorsville and the wounding of Confederate General Stonewall Jackson in a friendly-fire incident. There’s something about the story of the final days of Jackson’s life that has always interested me. Fortunately, now that the nice, warm weather has finally arrived, I decided to take a roadtrip to learn more. If you’re a regular traveler along I-95 north of Richmond, you may have noticed a strange sign south of Fredericksburg that says “Stonewall Jackson Shrine.” The word “shrine” is a bit of a misnomer: it’s really just the house where Stonewall Jackson passed away 150 years ago, a few days after his wounding in Chancellorsville. I spent a sunny Saturday afternoon there talking with a NPS historian named Frank O’Reilly, who knew just about everything there was to know about Jackson’s last days and was more than willing to indulge me in some good Civil War nerd banter. 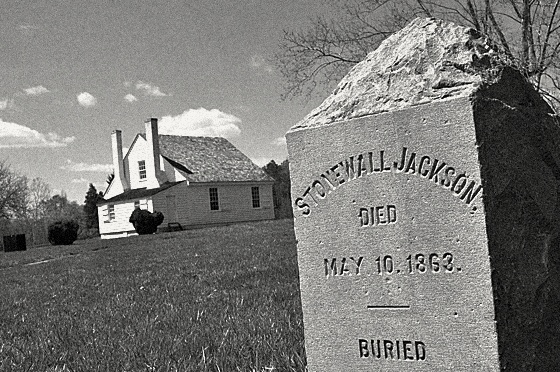 Jackson’s wounding took place the night of May 2nd as he was returning from scouting the Union’s position. A Confederate picket opened fire on Jackson’s group, hitting him in the right palm and twice in the left arm. Several of Jackson’s staff were also killed or wounded in the incident. That night, realizing the extent of damage to Jackson’s left arm, doctors made the decision to amputate two inches below his shoulder. Following the amputation, Jackson would recuperate at the Chandler plantation, a farm located nearby a railroad crossing just 12 miles south of Fredericksburg called Guinea Station. In the previous Fredericksburg campaign in 1862, Jackson stayed with the Chandler family and used the farm as his headquarters. Most recently, Jackson had come to Guinea Station on April 20th to meet his infant daughter for the first time. His wife Mary had given birth a few months earlier while Jackson was away fighting, and it was a warm reunion between the new father and his family. In just a few short weeks, Jackson’s wife and daughter would be returning to Guinea Station under much different circumstances.

In the first few days at the Chandler plantation, things were looking up for Jackson. The wound was healing well and Jackson was alert and anxious to return to the front. His boss, Gen. Robert E. Lee, was also anxious for Jackson to return, and sent him a message at the Chandler house making it clear that his position was open and waiting for him when he was ready to come back. However, all was not well. Unbeknownst to the many doctors and staff on hand, Jackson had some of the early signs of pneumonia even prior to his wounding. They assumed symptoms like the chest pains he was having were a result of the injury, but it was really the onset of the illness. By the time they realized it, Jackson was in an advanced stage of pneumonia and getting worse by the day. It’s a common misconception that Jackson was wounded and then fell ill, but it was likely the other way around.

Jackson’s wife and daughter arrived at Guinea Station on May 7th to find Jackson in a delirious state, coming in and out of consciousness. Mary kept a vigil by her husband’s bedside. Despite the presence of several doctors, many of whom were knowledgeable about treatment of pneumonia, nothing seemed to alleviate his symptoms. From his bed, Jackson remarked “I see from the number of physicians that you think my condition dangerous, but I thank God, if it is His will, that I am ready to go.” As the next few days passed, Jackson grew more delirious, often waking to shout orders to his officers, lost in a dream where he was back on the field of battle. During his last days, one consistent order he shouted was to his chief commissary officer, Major Wells J. Hawks, to bring warm food to the troops.

On the last day of his life, he stopped just short of giving the order to Hawks. Jackson’s head physician Dr. Hunter McGuire noted his final moments:

A few moments before he died he cried out in his delirium, “Order A.P. Hill to prepare for action! Pass the infantry to the front rapidly! Tell Major Hawks”—then stopped, leaving the sentence unfinished. Presently a smile of ineffable sweetness spread itself over his pale face, and he said quietly, and with an expression, as if of relief, “Let us cross over the river and rest under the shade of the trees.” 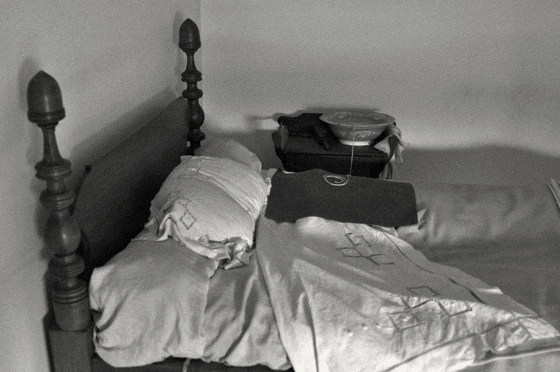 The deathbed of Jackson still remains at the house.

News of Jackson’s passing reverberated across the entire country and the western world. Jackson’s military successes had made him one of the most famous military figures of his day, and his passing was a huge blow to Lee and the Confederacy. Union General Gouverneur Warren wrote “I rejoice at Stonewall Jackson’s death as a gain to our cause, yet in my soldier’s heart I cannot but see him the best soldier of all this war, and grieve his untimely end.”

Lee had won the momentum in Chancellorsville, but at the cost of his finest soldier. His loss would be felt in the coming months as Lee took his army north. Jackson’s body would head south, eventually to be buried in Lexington, but would first head by train to Richmond for a state funeral. I’ll share some stories about his funeral and reactions in Richmond later this month. In the meantime, if you’re looking for a quick roadtrip, make sure you pay a visit to the Stonewall Jackson Shrine.

If you want to learn more about Jackon’s wounding and death, the Museum of the Confederacy is offering a program titled “Calamity at Chancellorsville” on May 11th from 1:00 – 2:00 PM. Dr. Mathew Lively will be describing the events surrounding, his death and it will be a great way to learn about Stonewall’s final days.