It’s not just an idea anymore, it’s a real plan that could actually be considered, implemented, and enjoyed. Is it Richmond’s time to High Line? The Richmond BridgePark Foundation spent all week at 1708 Gallery trying their best to convince the community that an elevated park that crosses the river would be something we would enjoy.

Well, of course we would enjoy it! It’s a park that crosses a river!1 But coming up with the exact design(s), usages, timelines, and, of course, funds is not exactly an easy process, so community support is huge. That means that this project–like all projects before it–has to go through the RVA gauntlet: the cynics, the realists, the environmentalists, the economists, the “Don’t forget 6th Street Marketplace” folks, the “You haven’t considered my personal parking situation” folks, the “Shouldn’t we put this money towards schools?” folks, and the “I moved out of town but I’m watching this debate with much interest so that I can swoop in with a reminder that this is why I moved out of town” folks. 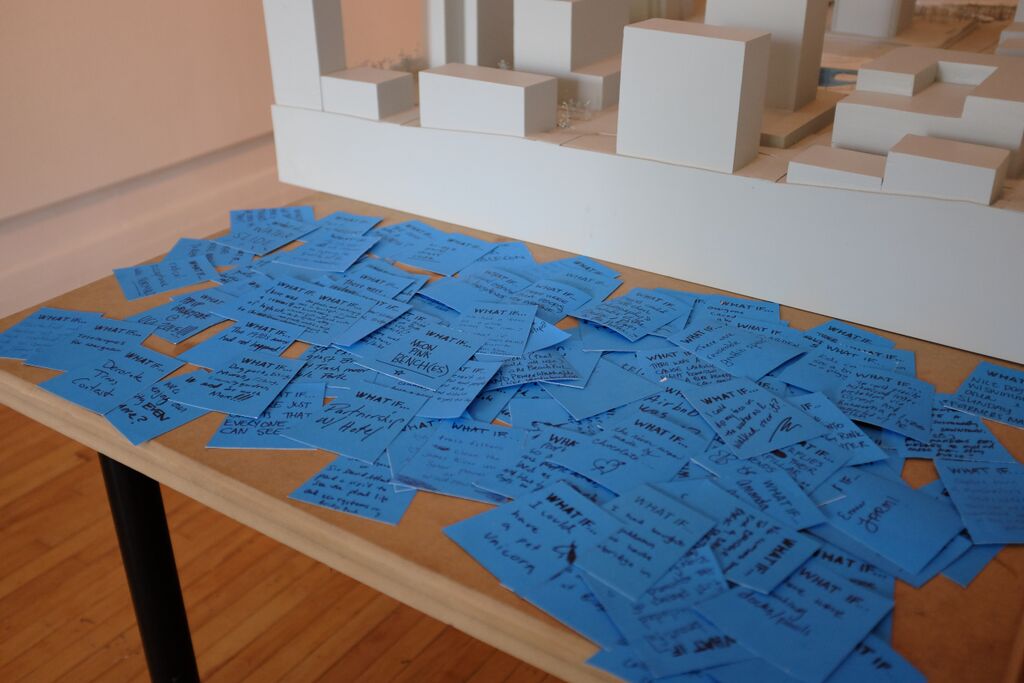 The “What If?” exhibition at 1708 Gallery included cards that asked visitors to put their wildest dreams on the back. Some were funny, some were serious, all were interesting to read. Photo courtesy of Daniel White.

There are always rational concerns with these things, but many of these viral soundbites over-simplify some more complex questions. Money, in particular, is not always a simple equation, and funds given by X organization in support of Y project are almost certainly not transferrable, instead, to a new school roof.2

“The city’s recognized that they can’t pay for this,” says BridgePark’s Ted Elmore. “As have we, but they’ve been quietly supportive as we continue to prove the concept and work on fundraising.”

This week, BridgePark has offered various classes and put on get-togethers to give an idea of what the experience would be like. Yes, there’s a scale model and some artwork, but for the most part, the walls are taken up with a video installation that shows scenes of river rapids, foliage, an aerial view of the proposed site (the railroad piers next to the Manchester Bridge), and the fantastic view of the city one gets from that vantage point. 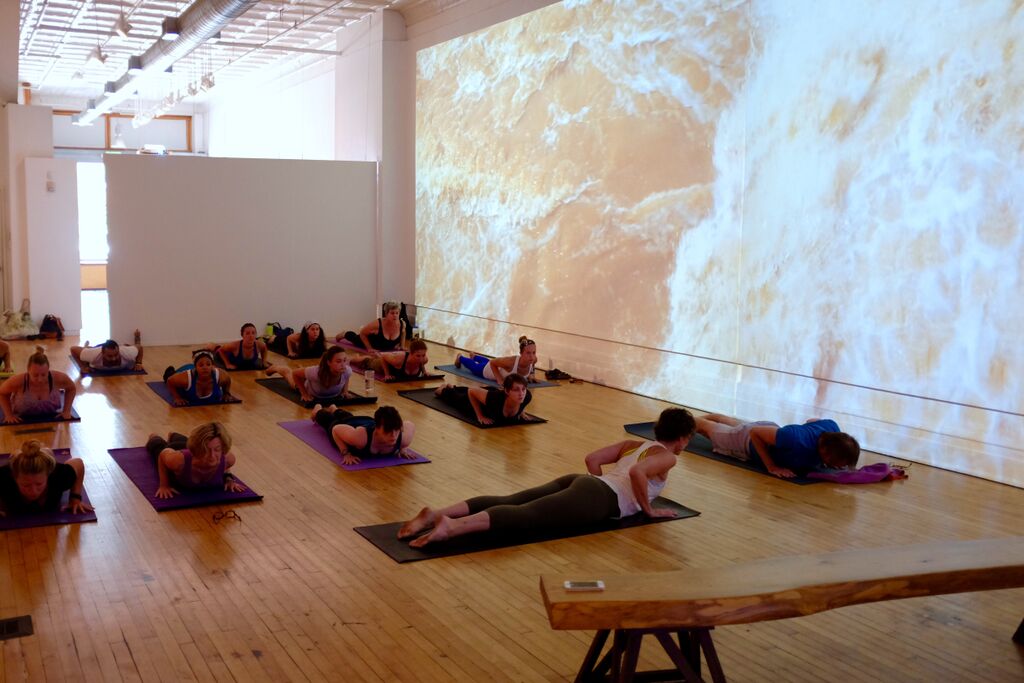 A yoga class courtesy of Karen Hansen from Ashtanga Yoga. It is very, very easy to zone out in peaceful bliss when facing that projection wall. Photo courtesy of Daniel White.

There are certain aspects of Richmond that are represented by such a plan–history (check, the piers themselves), gorgeous natural surroundings (check), outdoorsy river recreation (duh), tourism (got it), biking, walking, and otherwise getting out and about (absolutely), the need for a connection to the city’s growing Manchester area (and there’s the kicker).

There is really nothing quite like the James River as it hurtles through downtown Richmond. What other city boasts Class IV rapids through its financial district?

(Literally no other American city, as I learned in Geology 101 at my college, at which I was the only student from Richmond. I was extremely proud.)

Or eagles, ospreys and herons fishing below office buildings? BridgePark will enhance all of it, providing an important link on the South Side to the Manchester Flood Wall and the T. Tyler Potterfield Memorial Bridge and creating a loop for biking, walking, commuting and sightseeing. The park will connect and activate all the attractions our unique riverfront has to offer, directing visitors to the American Civil War Center, Brown’s Island, the Canal Walk, the Manchester Climbing Wall, the Slave Trail, the Capitol Grounds, the Capital Trail and the Blue Heron Rookery.

In that sense, the idea is magic. And, I’ll be honest, when driving northbound over the Manchester Bridge, I’ve more than once thought (particularly at sunset), “Wow, from this angle, Richmond sure does look like a real city.”

Apologies, fair city. You try very hard, and I wouldn’t change a thing about you. I mean, that’s really not true at all, but you get the sentiment I’m trying to express. Stretch a park across the river with that view at one end of it, and all of a sudden all of the images we use to entice people into the city will change. I truly believe it could have the power to be something that–if not defines us–could at least make up part of that definition.

These are weird and unsettling times. We could maybe use some help crossing over into the future, using our past quite literally as the foundation and moving into a better space from there. 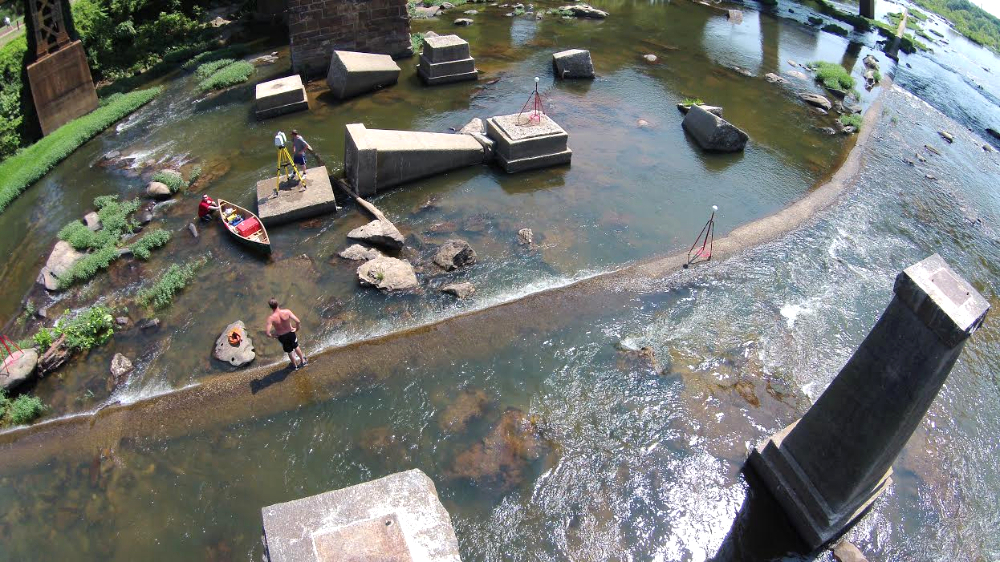 Peter Culley is an English native who moved to Richmond in order to put his architectural design skills to work on the Virginia Museum of Fine Arts. Yeah, that little renovation kept him busy for nearly ten years of his life, and he found himself susceptible to Richmond’s unique tractor beam. “I thought after the museum was done that there would unlikely be anything else for us in Virginia,” said Culley from L.A., where his company, Spatial Affairs Bureau, has one office. “But I’d built these personal associations and wanted to keep those going.”

He knows that it’s unusual for a high-profile firm (he’s currently working on the massive Southbank Centre project in London, among others) to have offices in London, Los Angeles, and…Virginia. But he just couldn’t bring himself to break the links he’d made in the community.

When he was first approached about BridgePark, he could see its potential, but stressed that it would need to be planned out at least three times (the team ended up with nine distinct possible plans). Various levels, various sites, and various implementations needed to be mapped out so that the community as well as the powers that be could fully explore every possible issue that rose to the surface as the plans unfolded.

“I’m very aware of schemes that sort of drop out of the sky with lots of pizzazz but are dead to everyone else,” said Culley, referring to the idea stage of a project. You can make a model of anything without backing it up with research or community feedback, and it somehow seems like it’s that much closer to a reality. By hiring Spatial Affairs Bureau, BridgePark tried its damnedest to begin on the right foot so that when it came to the proof of concept stage–i.e. the stage it’s currently occupying–the idea would get that much more traction, instead of lying dead in the water while the 6th-Street-Marketplace-people exchanged knowing sighs. 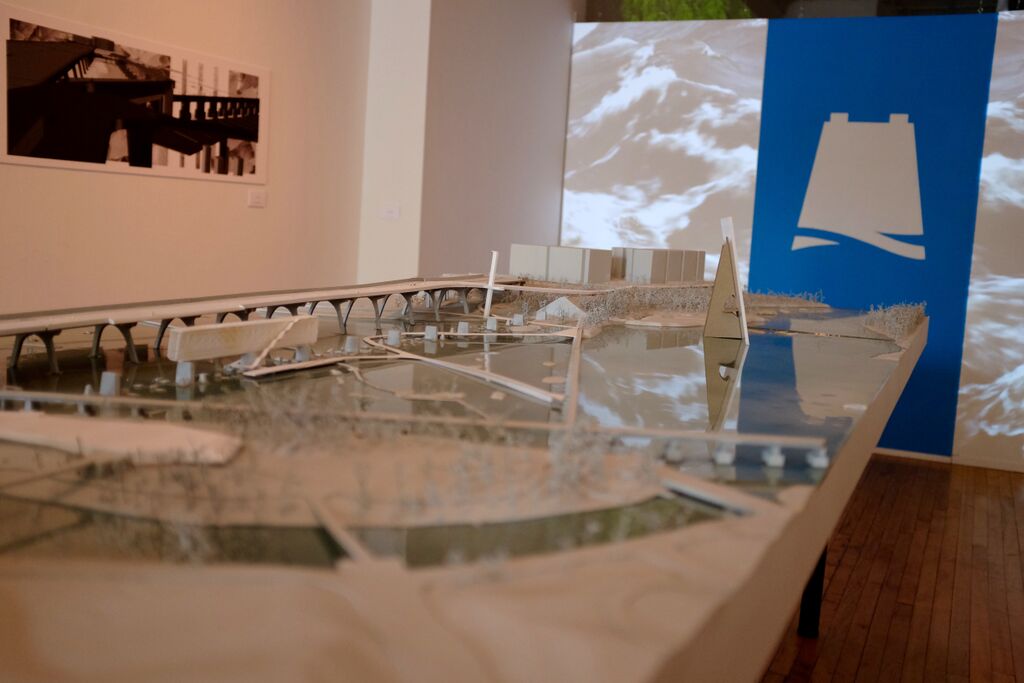 Part of the current exhibit at 1708 Gallery. Photo by Daniel White.

Sometimes it’s tough to cover projects like this–it’s almost like window shopping at a Maserati dealership. What’s the point, right?

But with the ongoing success of Low Line, which has generated financial contributions and made actual measurable and enjoyable progress towards their goal, it seems like…well…maybe this could be a thing.

Low Line, Elmore clarifies, is making improvements to an existing site, and the barrier to entry is a lot easier to surmount when it doesn’t involve a lot of new construction. BridgePark more resembles High Line in New York, a destination as well as a thoroughfare, and a venue as well as a natural gallery. That means more money and more buy-in from citizens, businesses, and the city. It does go to show, though, that the people and organizations with money to invest are taking a lot more interest in downtown and the East End. Will Manchester be included in their worldview? That remains to be seen, but the Southside community will definitely bask in a lot more of the spotlight if it’s physically connected to the rest of the city by a park that attracts a lot of tourist attention.

Cost estimation is next on the list for the Richmond BridgePark Foundation, which is sure to follow it up with some focused fundraising pushes. In the meantime, keep an eye on this project, which just might disprove the theory that something is too good to be true.

Stop by 1708 Gallery this Friday, August 7th to get the BridgePark experience, see the “What If?” cards, look at the model of one of the designs, talk to Foundation members, and ask a ton of questions.