It’s more than just plants—it’s a way to keep the city growing, invest in an up-and-coming area, and respect history. We talk with Jeanette McKittrick of Capital Trees. The City announced last week that CSX would be adding $100,000 to the pot from which the “Low Line” Canal Street beautification project is rapidly growing.

Jeanette McKittrick is co-chairman of the board of Capital Trees, a collaborative effort of four garden clubs. And before you start imagining little old ladies with too much time on their hands, fussing about their geraniums, I invite you to adjust your mental image. These dedicated members–and the impressive list of those who support them–aren’t just willing to be covered in sweat and topsoil, they’re also becoming very good at engaging various officials from municipal government and huge shipping companies. Oh, and architects, lawyers, environmentalists, designers, and even former city jail inmates have all been important branches of the project.

Capital Trees began only five years ago with a much smaller project, a little median at Cary and Three Chopt. Now, the group has not only expanded their capacities and their reach, but they’ve moved on from a plot of land directly across the street from the Country Club of Virginia to a neglected strip in the East End. It’s another indication that the East End is gaining traction not only as a tourist destination (the Big Bike Race™ was a big factor in the Low Line schedule) but also a legit place on Richmond’s map.

“This was where Lincoln landed when he came to claim Richmond,” said McKittrick. “It’s an important area to Richmond industrial history. It’s where the tobacco barges came in and out (the slips are still there underneath those weeds), and there’s also a real environmental opportunity there.” She’s convincingly earnest in her approach–this isn’t some pass-the-time project or a publicity stunt. Capital Trees is doing the dirty work, and will continue to do so for the foreseeable future, as the City has agreed to allow the group to take over maintenance of the park in perpetuity. 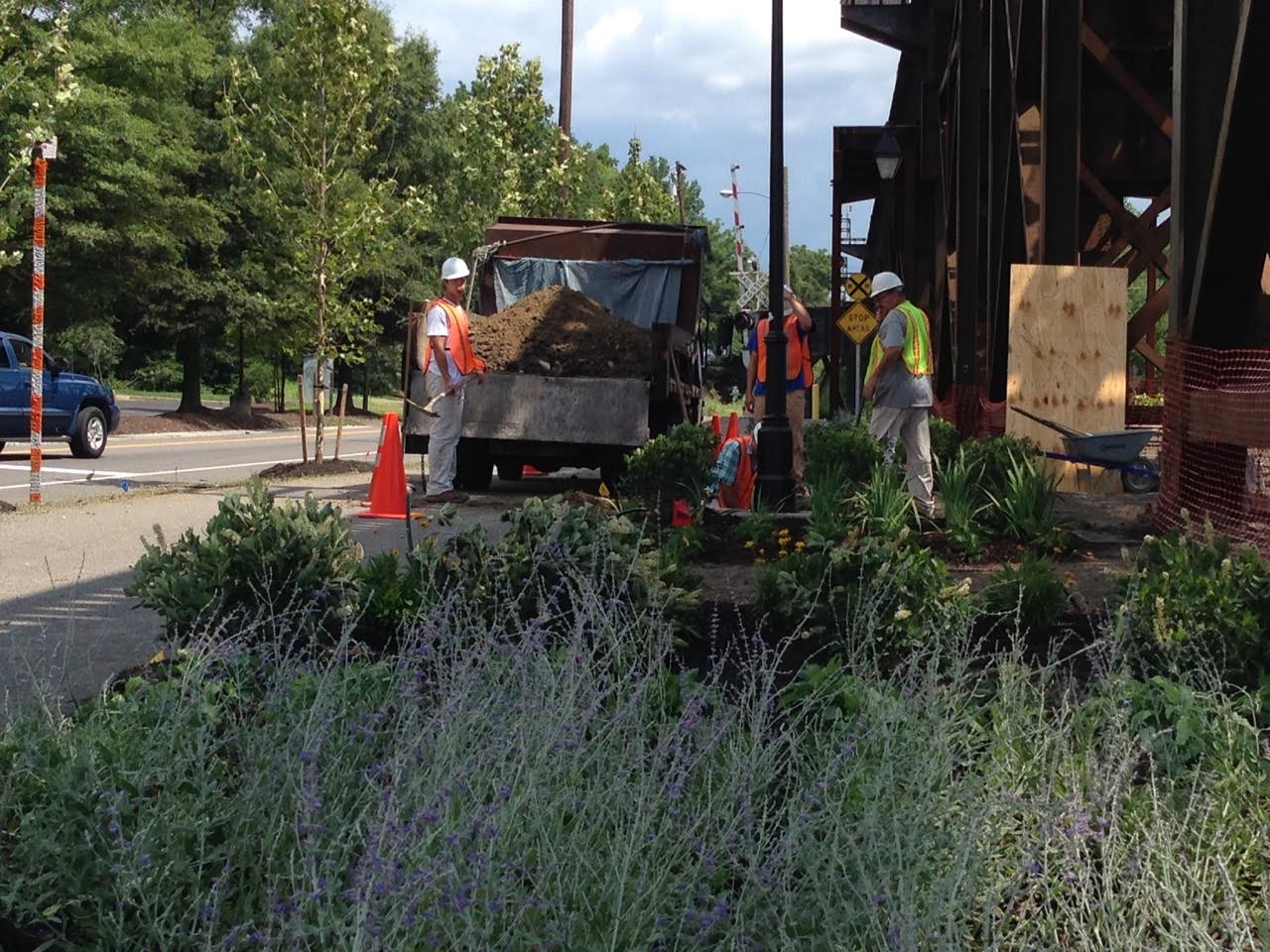 It wasn’t an abrupt jump from the fleur-de-lis of Westhampton to East End–Capital Trees already tackled 14th Street, turning it into a much more efficient use of the stormwater that hurtles down the slope towards the river. Great Shiplock Park is theirs too–Beth Weisbrod of Virginia Capital Trail Foundation approached landscape designer and Capital Trees boardmember Meg Turner about the kiosk where the trail begins. “And Meg said, ‘Sure, but what about all the rest of the space,’ and before you knew it, we were in there, landscaping the whole thing,” remembers McKittrick.

Following Turner’s vision, Capital Trees met with Keith Whipple from Waterstreet to talk about taking it even further: clearing out and landscaping the entire stretch from Great Shiplock to the Canal Walk. They’d call it “Low Line,” after New York’s High Line Park, which greened up an unused elevated CSX track. Ours goes under the track, which might be slightly less cool, BUT…ours lies right next to a historic canal which, in turn, lies right next to a gorgeous urban river. The powerful Southern wilderness that, if we let it, would overtake our city is a splendid backdrop to projects like these. And that’s pretty dang cool.

It took one meeting with Chris Beschler and Mark Olinger from the City to get them to agree to speak positively about the Low Line idea to City. Soon, Capital Trees got a financial commitment for the project, which they expected to cost about $825,000. Other donors pitched in, like the Mary Morton Parsons Foundation and the Cabell Foundation (who just gave them a $200,000 matching grant), and McKittrick and co. got started as quickly as they could. 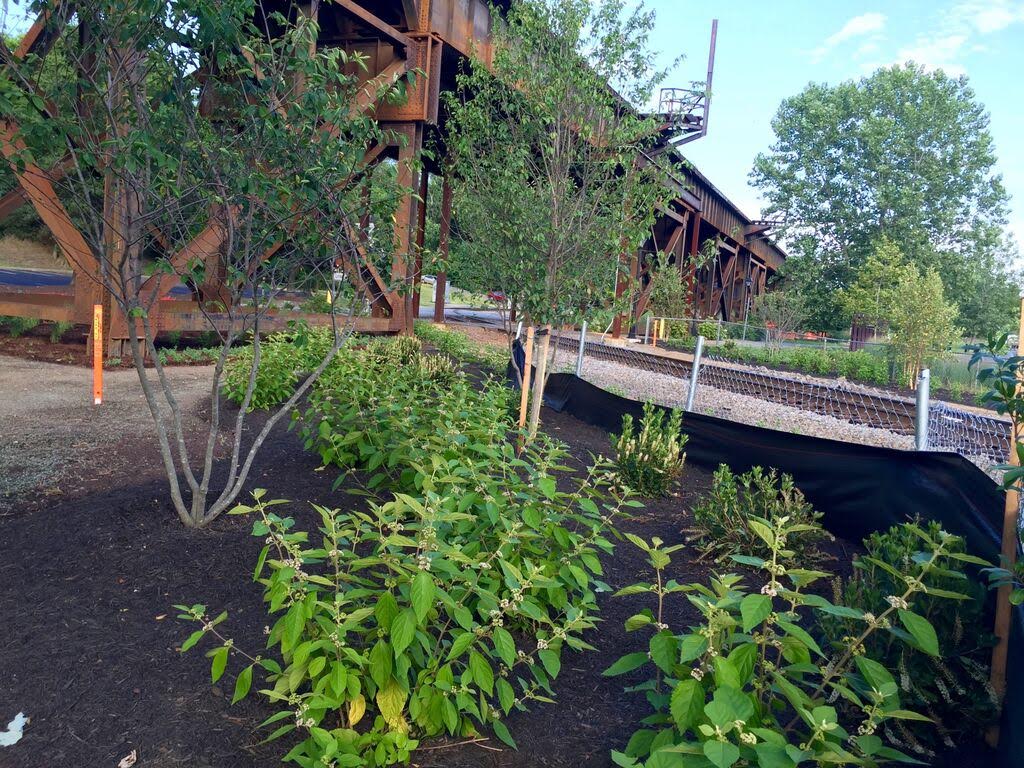 By fall of 2014, the project was underway. The whole thing will take about five years, says McKittrick, who focused initial efforts at the East End of the space, because that’s where they’d be able to make the biggest impact in the least amount of time. As the money comes in, they park takes shape.

With CSX now financially on board, Capital Trees is zeroing in on the shipping company’s largest priority: safety. If you walk along the Line now, you’ll see the beginnings of what will be steel canopies that will sling underneath the trestle. McKittrick has been pleasantly surprised by the willingness of CSX and the City, who both own parcels of land that make up the 5.5-acre site, to work together.

As far as the landscape of Low Line, they’ve used mostly native plants. McKittrick envisions a space that can be friendly to both humans and wildlife–“Essentially, it’s a 5 1/2 acre riparian buffer. It’s a filter for water, and with all these native plants, we’re going to have native bugs and birds and try and restore some of the ecosystem.”

Interestingly, the native ecosystem has changed somewhat, and some plants that would have done splendidly in an environment like the Richmond of yore would now find it difficult to get by around the heat islands and densely packed ground around paved areas. The non-natives, therefore, were chosen for hardiness, assistance with water filtration, and “a willingness to get their feet wet,” as McKittrick puts it. When the canal rises, these plants have got to be able to deal with that.

Low Line will be as far along as it can be by the Worlds in September, which means gorgeousness on the easterly side, planting, irrigation for the entire track, the steel canopies, and a ton of weed and invasive plant clearing (former city jail inmates helped out with that at the start, through a work-study program in groundskeeping and landscaping, which thrilled McKittrick). But as we all know just from walking around, those invasive plants need constant battling, so the efforts will be ongoing and mighty.

Sometime in the near future, we’ll have the area at the start of the Canal Walk as a place for programming–perhaps live music and public art. McKittrick even hinted that they’d been in talks with a former High Line event curator.

“The biggest thing that we’ve learned is that Richmond can really get behind you if you present a vision like this,” said McKittrick, looking back on the last year of work.

If you’d like to get behind the project, funds are what Capital Trees could most use at the moment, although volunteer opportunities through HandsOn Greater Richmond might be available fairly soon. Check out Capital Trees online and make a donation.