Dock between South 21st and Pear streets is getting plants starting this fall. 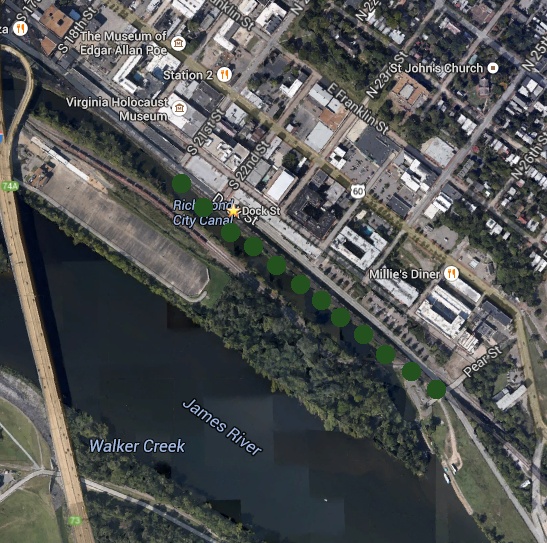 Dock between South 21st and Pear streets is set to get 117 trees, 475 shrubs, 1,604 ferns and 7,934 perennials and miscellaneous grasses and vines in an effort to spruce up the area. The hope is that these efforts will encourage more people to take advantage of the canal and riverfront. Work is expected to begin this fall and wrap up by the end of summer next year.

RTD has more on the effort and the partnership with Capital Trees.

Planning Director Mark A. Olinger said Monday he views the planned planting blitz as the first phase in a “landscape transformation” coming to the area as the Virginia Capital Trail progresses and the riverfront east of downtown continues to develop.

“We can get some of this done between now and the (2015 UCI Road World Championships) bicycle race,” Olinger said.

City planners ultimately envision an enhanced linear park below the elevated rail trestle that runs along Dock. The larger project, dubbed the “Low Line,” could involve the creation of a boardwalk along the canal edge and a new pedestrian bridge to Chapel Island near 21st Street.