This week, Maat Free tells us about five disasters that tried, but failed, to ruin our city. This week on The #untoldrva 5 Things, rather than present Richmond as an efficiently functioning capital city with all of its odds and ends in proper order, let us dare to take a gander in the opposite direction. Oh, yes. We’re going there. Join us as we journey along a treacherous path towards some of the most calamitous of circumstances that have ever happened here, situations from which we barely made it out in one piece. Hold on for dear life, it’s The Disasters Edition: reflecting on the bleakest of days when residing in RVA was more like living in hell. 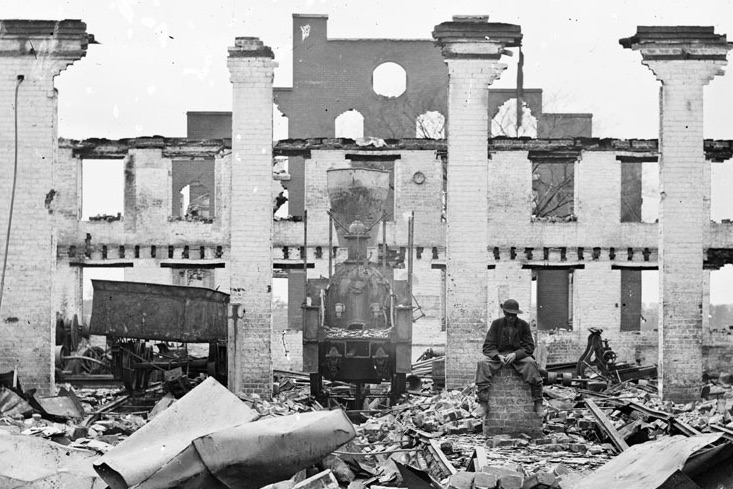 Photo from Library of Congress

On April 3, 1865, on Libbie Hill right up the street from Shockoe Bottom, Union troops from the North began to descend on the city, led by a throng of Black soldiers mounted on horseback, poised to liberate the enslaved masses with guns drawn on their civilian captors. Then the worst imaginable scenario came true for the residents of Richmond. It was as chest-clenching as the apocalypse. All hell had broken loose.

The night before, General Robert E. Lee and his army had fled the city limits under the cover of darkness, taking with them all that they could carry in riverboats and wagons. Richmond City Council ordered people to torch all the warehouses that stored cotton, flour, and ammunition. Saloon owners were required to smash every single cask, barrel and bottle of liquor, whiskey, wine, or ale. Dogs and drunks and people in a panic bent down in the gutter and slurped themselves into a full blown stupor, gathering what they could into bottles and pots and pans while dashing in and out of their smoke filled kitchens.

Drunk people flooded the streets, stray animals and all manner of vermin were running this way and that, trying to avoid being consumed by the raging fire. Nobody could believe the pandemonium that ensued. Only the flickering light from the uncontrollable blaze could cut through the despair of Richmond’s darkest hour.

One block after another went up into flames. When the armories exploded, windows cracked twenty miles away in all directions. There was a fierce wind blowing that carried the blaze much farther than they had anticipated. 1,200 businesses were reduced to smoldering ashes. The fire raged on for three whole months. 90% of the banks were burned to the ground. This devastation took place where the downtown financial district is located today. The whole area was wiped out from 5th and Main all the way down to 14th and Cary including several blocks to the left and right. 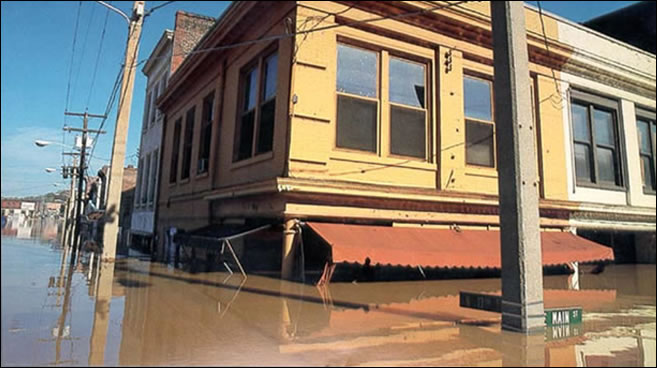 It was Autumn, 1985. Hurricane Juan had just ripped through the Mid-Atlantic and sheets of rain pummeled the city from Halloween night until seven straight days had passed. People watched helplessly as the James River rose to more than 30 feet high. They began calling it the Election Day flood because the rain had disrupted people from getting to the polls on November 5th. Despite the torrents, Doug Wilder still won for Lientenant Governor, which was historical in and of itself. Surely there were people who thought the flooding was some sort of sign.

Two days after the elections, Shockoe Bottom was under 12 feet of water–literally up to the street signs and second story windows. Water was everywhere. Three of our seven bridges were washed out. You couldn’t even cross the James on I-95. Schools were closed. The wiser merchants in Shockoe had already moved their goods to higher elevation points. Thankfully, the city water supply was spared when they decided to sandbag the plant to protect it from up to 28 feet of storm water.

Overall, Virginia experienced 22 deaths and more than $800 million in damage. Afterwards, President Reagan was quick to sign laws to authorize the construction of our floodwall, which they completed in 1994. Ever since then, we haven’t really had any comparable floods to test its limits though. Looking at Shockoe in pictures back to that era, it’s hard to imagine how we could ever come back from that, but if nothing else, RVA is one little resilient town, you can bet your bottom dollar on that. 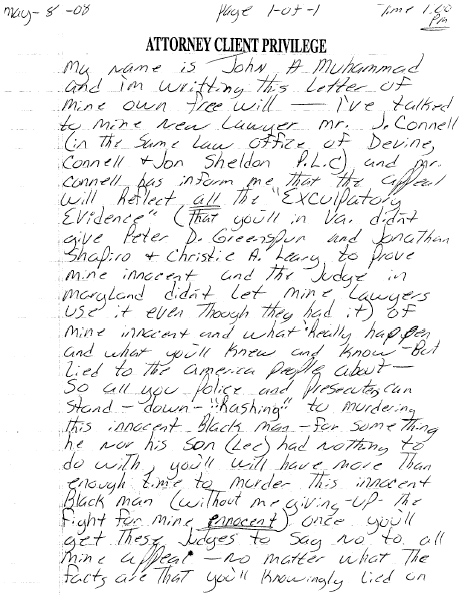 In Autumn 2002, the DC area was absolutely petrified to learn that someone was shooting and killing people who seemed to be doing no more than minding their business and getting into their cars at the store. The horror was that these shootings were happening sniper-style, and none of the victims ever saw it coming. Over two dozen incidents were clustered around the Beltway and seemed to be moving closer and closer to Richmond until one day, the unthinkable happened. Someone was shot and nearly killed leaving a Ponderosa restaurant, right outside of town in Ashland. That was all it took. The city was gripped with fear. People refused to go to the gas station because nobody wanted to be exposed and vulnerable to the possibility of the snipers shooting them dead, just like what was happening all up and down the I-95.

Once it was rumored that the snipers were driving in a white van, hysteria spread far and wide. When someone in Richmond spotted a white van with a driver and passenger who seemed to fit the description of the sniper suspects, it sent the city into panic mode. 200,000 RPS students stayed home under orders of city council. The worst part was that the victims were so diverse: men, women, all races and age groups, none of which seemed to be related to any particular group that might help people understand the patterns of the shooter.

Eventually, the violent spree was brought to a halt when two arrests were made and the suspects were in custody. However, the fright that they caused in Richmond has not yet been forgotten. It was indeed a turn of the century disaster, the likes of which no one ever wants to endure again. 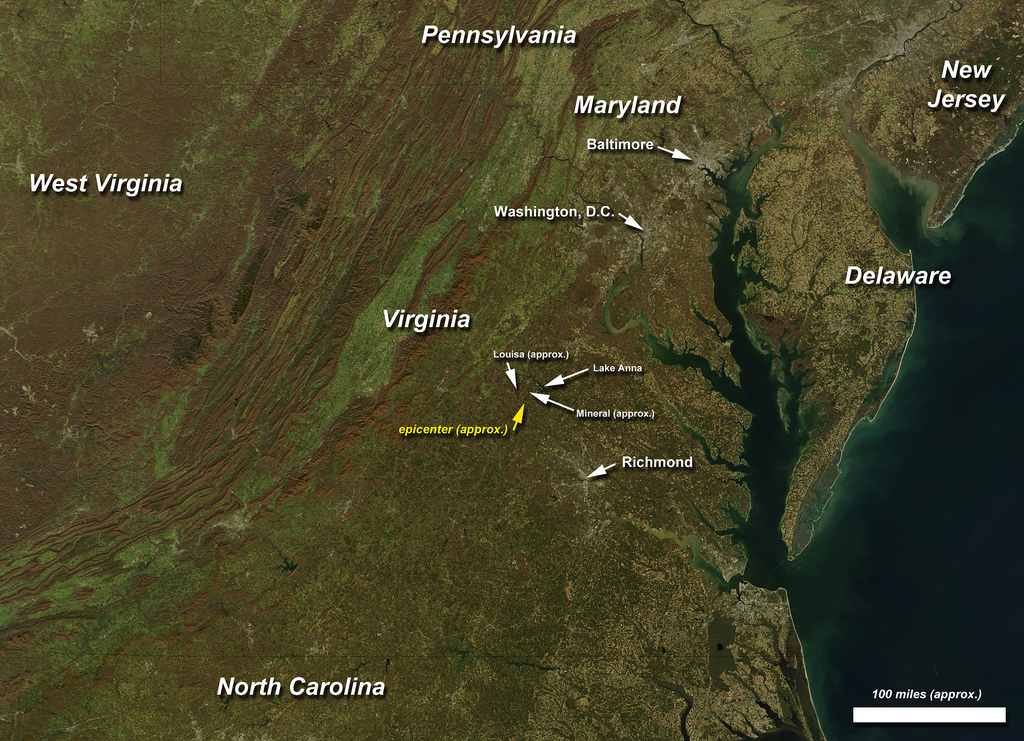 Nearly 400,000 Richmond residents lost power as a result of Hurricane Irene and then a few days later, everybody went into a complete tailspin when the ground began to rock back and forth under our feet. First a hurricane, then an earthquake? What in the world? Things like this weren’t supposed to happen here.

The earthquake’s epicenter was in Louisa County at a place called Mineral, only 38 miles from RVA. Talk about hitting close to home. The biggest fear was the fate of the North Anna Nuclear Generation Station. Would it leak radiation? Could there be a meltdown? These were the questions to which everyone was clamoring for answers. Although our first thought was thinking “Oh my goodness, Chernobyl,” inspectors conducted a $21 million dollar assessment and determined that the damage to the reactor was merely cosmetic. Phew! All was well.

But back down Richmond way, while the power was out for almost ten days, it became evident that people weren’t ready for something like this to go down in the Capital City. Folks didn’t know how to cope with eight inches of rain, 65 MPH winds, snapped trees, downed powerlines, impassible roads, and then an earthquake too. Would there be aftershocks? More storms? When would the power be restored? It was hot as blazes. Food was spoiling. It became too much. Those without candles, batteries, ice chests, bottled water, generators or outdoor grills learned the hard way. Calamities like the one we experienced in 2011 serve as a warning and call to action so that folks will be prepared if and when the next local disaster strikes. Situations like this make people begin to think about surviving off grid. 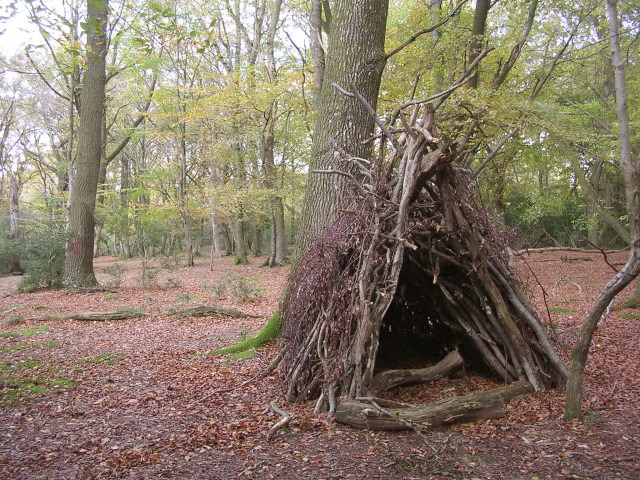 So if you’re living in, let’s say…Fulton Bottom or Randolph or Carver neighborhood and you’re home watching one of those doomsday prep shows on TV, and you get the feeling that knowing what to do in times of trouble is a pretty good idea, where would you go to get solid training and expertise? Who’s available to take you and your family into the woods and help you learn to forage for food, collect water, build fire, secure a shelter, and keep yourselves safe from harm?

There is a tall, slender, quiet warrior type of woman named M. M. Bey who was born and raised in Richmond, descending from a long line of serious community-minded teachers and elders. Country life and city life require different skills sets for survival and for 10 years, M. M. Bey has been committed to making sure that people have the information they need to survive in an any situation. First-aid, food prep, how to buy essential tools, homesteading, canning and dehydrating–these are all things that help a family or an individual ready for whatever may come. Bottom line, if trouble strikes us in the future, everyone needs to have a plan. State agencies encourage everyone to be self sufficient for the first 72 hours of any disaster but by then, some people would have created more problems for themselves just by not knowing what to do.

A word to the wise is sufficient: get ready to stay ready. Be on point. Know what to do. Gather what you need before you need it. Call someone who actually specializes in this sort of thing. It’s a good feeling when you know that you’re trump tight for anything, whenever storm season’s drama comes to greet you at your door.

Wanna hear the brand new exclusive, next-level dialogue between me and the special Disasters Edition guest? Sure you do, you’ll love it! Tune in to WRIR 97.3 at 9:00 AM on Friday, June 19th for “The #untoldrva Five Things” radio show. It’s a full hour of talk, music and random quickfire questions for our secret guest, and as always, it’ll be a whole lot of fun.