Channing Tatum’s semi-autobiographical film about male strippers has more to it than pelvic thrusts, leather chaps, and sweaty dudes. I saw Magic Mike, a week after it was released, fully prepared to sit in a mostly empty theatre with a row all to myself. I showed up twenty minutes early, and the theatre was packed; my friends showed up ten minutes early, and the show was sold out. So I watched Magic Mike, Channing Tatum’s semi-autobiographical film about male strippers, alone yet surrounded by hundreds of women1–women who were very excited to be there.

The communal aspect of moviegoing is my favorite, but you usually have to hit a movie on opening night to experience that whole-theatre emotional connection. Not so with Magic Mike! This audience hooted, hollered, clapped, and cheered–all during the opening credits. These ladies were stoked to be there, and, it seemed, mostly stoked on the piles of naked dudeflesh that was sure to follow. 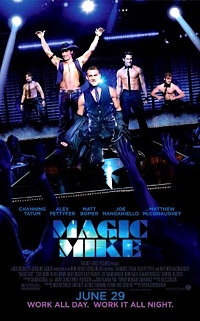 And Magic Mike wastes no time in delivering. The first scene opens with Dallas (Matthew McConaughey, Dazed and Confused), the shirtless2 owner and MC of a male strip club in Tampa, setting down the guidelines for the ravenous all-female crowd.3 After a fair bit of gyrating, Dallas gives way to the main attraction: Magic Mike (Channing Tatum, 21 Jump Street).

Mike’s a normal enough guy/Adonis who works a couple of different jobs in addition to poplocking his crotch all over the dance floor. His dream, the American Dream, is to save enough money tiling roofs, detailing cars, and dry humping ladies to open up his own custom furniture business. Along the way he meets Adam (Alex Pettyfer), an unemployed and out of luck exceedingly hot dude. Mike convinces Adam to join the merry band of strippers, and he instantly falls for the fast-paced lifestyle of women, booze, and leather chaps. It doesn’t take long before Adam’s stock starts to rise, and Mike begins to see his fall as he is left to contemplate just what the heck he’s doing with his life.

So guys, confession! Everything about this movie fascinates me. Director Steven Soderbergh (Erin Brockovich) has flipped the typical gender roles, and it is blowing my mind. If instead of a room full of women, a theatre full of men hollered as scantily clad strippers jiggled about onscreen we’d all throw up in our popcorns, right? And once quantitatively beautiful men begin to move in overtly sexual ways (thrustthrustthrust) it gets awkward real quick. The film, which is actually a pretty bleak story about the realities of life, is told through these incredible dance numbers composed of long, arduous shots of hairless manbutts. It’s weird, uncomfortable, and wonderful all at the same time.

You gotta love Channing Tatum for producing and starring in a film about his time spent as a stripper in Tampa–not really the most flattering of subject matter. You also gotta love his jaw-dropping, mesmerizing dance moves. And maybe you’ve got to love his acting? I dunno. The script and Tatum’s delivery is either super authentic or terrible, I can’t decide. A lot of his scenes feel like conversations you’d have with your pals and totally lack tight and lilting dialogue. When Tatum gets frustrated he stutters and stumbles over his words, never saying exactly the right thing. He’s either a genius or he never learned his lines, you decide! The honest/clunky dialogue helps take some of the edge off of the flawless bare-skinned dance numbers.

The true star of the show, other than Channing Tatum’s torso, is Matthew McConaughey (and his torso). I’m too lazy to write a whole paragraph about his abs, so just know that they’re front and center in mass quantities. McConaughey perfectly plays the skeevy, sleazy (but still somehow charming in a skeevy, sleazy way) club owner Dallas, the part works well with McConaughey’s innate alright-alright-alrightness–especially when he’s not forced to play a dopey boy friend.

Sure there’s a bunch of stuff that feels forced (like Tatum and Pettyfer’s relationship and basically everything that love interest Cody Horn does), but at its core, Magic Mike might be a good film! So IN YOUR FACE ladies who thought they bought tickets for the female version of USA Up All Night! You’ve been hoodwinked into seeing a real movie!

Well, obviously if you like abs and butts, but also, if you’re a Soderbergh fan. And the ending, which makes the movie, might surprise you.

There is one (fantastically done) shot of a penis, so keep that in mind.