While it may not resemble the original 1980s television show, 21 Jump Street serves up, surprisingly, more LOLs than you can cram in your mouth. I mostly like to decide which movie to review by heading over to Rotten Tomatoes, picking the highest rated movie that’s opening, getting disappointed because Richmond won’t be showing that movie for a couple months, and then finally settling on the third or fourth next highest rated film. This week, the choices were seriously slim. Here are the current ratings1 of the top grossing films: 86%, 57%, 54%, 51%, 45%, 42%, 29%, 26%, 0%.2 Color me holy shit when I saw that the only movie receiving an overall favorable rating rating was 21 Jump Street!

I must admit, I know nothing about the original 1980s 21 Jump Street which, over the course of 103 episodes, erected the careers of both Johnny Depp and the Fox Network. But the premise is simple: young-looking cops would go into high schools as undercover teenagers and, over the course of an hour, teach the audience a Very Important Moral Lesson. 21 Jump Street the movie is just like that but with dick jokes instead of moral lessons. 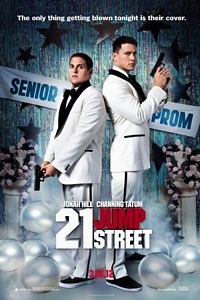 Seven years ago, way back in 2005 when Eminem was still kind of a thing, Morton Schmidt (Jonah Hill) was your typical nerdy fat kid3 and Greg Jenko (Channing Tatum) was a rippling athlete with a superbad haircut and not so much in the smarts department. You know, high school on the regular.4 Time passes, and for whatever reason, both Schmidt and Jenko decide to become police officers…and best buds!

Listen: it doesn’t really matter why or how these two archetypal enemies become fast friends. The film is a vehicle for hilarious dick jokes, and the backstory just stands in the way of their inevitable onslaught.

The two pals are involved in a series of (hilarious) screwups and are (hilariously) sent to a special undercover unit, captained by Ice Cube, located down on Jump Street. From there they are assigned new, high-school identities and tasked with infiltrating a drug ring and bringing down the supplier. But 21 Jump Street goes DOUBLE fish out of water, when on the first day of their assignment Schmidt and Jenko mix up their new identities. Up is down! Left is right!

But, really, it doesn’t much matter because Schmidt fits right in with the school’s popular crowd. Because high school has changed a lot since Jenko ruled the hallways onestrapping his Jansport, punchin’ nerds. It’s cool to care about stuff now! You gotta reduce, reuse, recycle, man! Drama kids rock! And so forth! From here it gets fairly predictable (until it gets totally unpredictable) as the nerd reigns supreme and the once popular is relegated to the science lab.

21 Jump Street’s dialogue is a quickly paced tapestry of incredibly crude and adolescent humor5 that really exposes the comedic tenderloins of the Jonah Hill and Channing Tatum duo. We all knew, going in, that we could expect it from Hill, but Tatum’s fledgling interactions with the lower rung of high school society were super funny and pleasantly surprising.

You’re not going to see anything new or groundbreaking coming out of 21 Jump Street, but you will laugh a ton, hurry home, and tell a bunch of dick jokes to your wife.6

You love laughing. There are only a handful of throwaway jokes in the entire movie, which is saying something as there are about a trillion jokes. If you loved Superbad, you will love 21 Jump Street. I love leaving a theatre and feeling like I spent the entire time laughing. Pacing! It’s important!

Crass, offensive humor offends you. Like I said, there are lots and lots (and lots) of puerile jokes. I wouldn’t want to watch this movie with my parents or my three-year-old son.